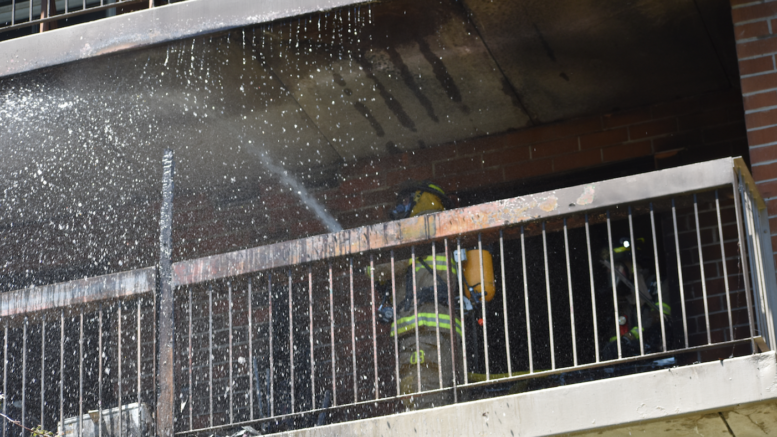 Through the diligent work of Prince Edward County Firehighters and a hurried but successful evacuation that had been practiced and designed by Fire Prevention Officer Mike Branscombe, disaster was averted in Picton on Saturday afternoon.

An overheated power bar at a third floor apartment in a building at the corner of West Mary and Spring streets led to a fire that called for firefighters from Stations 1 and 2 to assemble and battle the blaze for a period of time. Prince Edward County Firefighters gained access to the roof of the apartment building with the use of the arial truck. (Jason Parks/Gazette Staff)

In total, two apartments- the point of origin and an adjacent dwelling were completely destroyed while others nearby suffered smoke and water damage.

Prince Edward County Fire Chief Scott Manlow pegged preliminary damages at about $250,000 but more important than costs was the fact all residents escaped and, save for one resident treated at the scene for smoke inhalation, all were able to evacuate safely and without harm from the fire.

Manlow said the cause of the fire was accidental in nature and that Fire and Rescue typically don’t see a great number of power bar fires despite their prevalence on social media.

“There has been great awareness made by Electrical Safety Authority but in this case, a long cord was curled up by the bar in a bedroom with two or three devices plugged in and there was a pillow nearby,” Manlow said. “There was heat generation, the pillow ignited and then caught the mattress and soon the dwelling was involved.”

Manlow said the tenant wasn’t home at the time. Visiting the scene on Monday, the Chief said clean up and respiration was well underway on the ground and second floors as well as the fourth floor.

Ultimately, Manlow said about a handful of persons were be displaced for a period of time.

The building is owned by Prince Edward-Lennox & Addington Social Services and is home of a wide demographic of supported residents.

Manlow spoke highly of the PELASS staff who were on scene in the minutes following the call to assist residents and guide them through the next steps.

“I know the PELASS staff and our own FPO have worked quite closely on fire drills, making sure they had that central meeting  place,” Manlow said.  “Luckily, everyone had self evacuated by the time we arrived on scene and  I praise everybody, our staff, the PELASS staff and it’s a fortunate thing the building is designed as a non-combustible. In the aftermath, the Salvation Army opening its doors and hosting the folks until most of them could return home and it’s a really great sign of how this community cares for each other. We were so grateful for the Salvation Army to have that type of response.”

Those residents in non-affected portions of the building were able to return home later that evening.

Manlow said all firefighters who answered the call which first came in as a fire alarm at 12:02 p.m. performed their duties without incident and there were no injuries reported.

In total, there are 69 units in the multi-wing building and Manlow said the focus was to attack the fire on the east wing and drive it back and make sure the dwellings in the west end were protected.