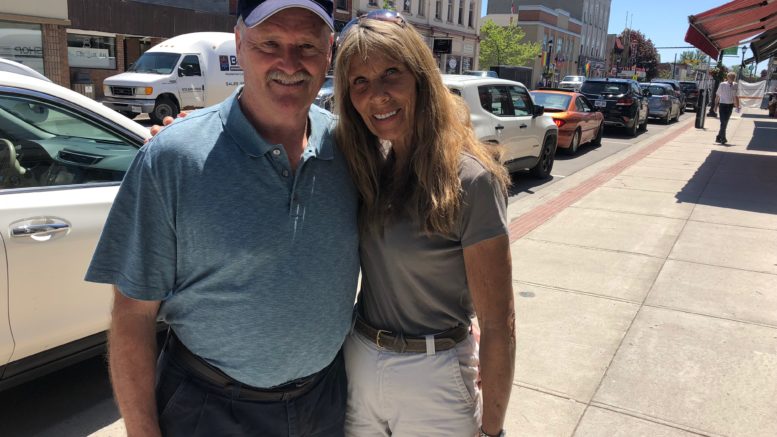 ADVOCATES- John Watt and Elaine Tanner continue to call on the Ministry of Natural Resources and Forestry to reinstitute a lifeguard program at Sandbanks and other high volume Provincial Parks in Ontario. (Jason Parks/Gazette Staff)

Sadly, it seems as much a staple of the summer season in Prince Edward County as the accompanying hot weather and increase in tourist traffic.

A drowning at Sandbanks Provincial park.

In late June 2018, Javaughn Black, a 7-year-old Jamaican visiting family in Ontario became another case of a drowning at one of the province’s busiest and more popular beaches operated by the Ministry of Natural Resources and Forestry.

Later on in the summer of 2018, a pair of females were revived and taken to Prince Edward County Memorial after being removed from the water within minutes of one another.

And those are the incidents that were reported.

What about the near misses that don’t receive any media attention?

Former Provincial Park lifeguard John Watt and Olympic medalist Elaine Tanner were in Prince Edward County last week to visit the beaches and bang a drum they’ve been pounding on for the better part of two decades.

Tanner and Watt, a former lifeguard who served at Sandbanks and other parks across the provinces as a roving lifeguard when the Ministry of Natural Resources  still had beach patrol staff that monitored the waters and conducted rescues among other duties, stopped by the Gazette office to raise awareness that the annual tragedies that seem to take place nearly every summer at one of the three beaches that make up the Sandbanks Provincial Park could be better avoided.

The solution to this ongoing cycle of a dramatic water rescue, drowning or revival, concern that eventually wanes and then repeat?

Watt and Tanner operate the website www.bringbacklifeguards.com and advocate for the return of professional lifeguarding services at Wasaga Beach, the longest and largest free water beach in the world.

However, their scope and research isn’t restricted to the beaches at the southern point of Georgian Bay.

Watt explained he monitors for instances of drownings and near drownings at all of the beaches that are part of Ontario’s Provincial Parks system and knows the Javaughn Black story well.

The young boy was missing for at least 45 minutes and an off-duty doctor who just happened to be at the beach at that time worked in vain to revive the young boy.

This part of forcing people who have come to the beach to enjoy leisure time with friends and family into de facto first responders and rescue technicians is one of several points Watt and Tanner try to shed light on.

“The public has been placed unnecessarily in a first responder position at Sandbanks Provincial Park,” Watt told the Gazette. “People who are simply standing nearby are going into the water and rescuing victims. Teenagers and mothers are being forced into a situation where their lives are at risk and they shouldn’t be pushed into this position by the province who are charging admittance to the property. Sadly,  I don’t think it’s ever going change.”

The fact that Javuaghn Black was missing for 45 minutes before being located and resuscitation efforts were attempted is consistent with what typically happens at Sandbanks and other Provincial Park high volume hot spots such as Wasaga and Rock Point on Lake Erie.

Watt interviewed another beach goer that witnessed a near drowning at the Dunes a number of years ago and the mother of young children recalled the horrors of attempting to get a call to 911 and the revival attempt while paramedics made their way to the scene.

“She told me ‘I brought my kids here specifically for safety and now that I’ve witnessed that there’s nobody in charge, I’m never coming back’,” Watt said. “And that’s an emerging trend,  People are changing their thoughts and their plans for safety reasons.”

Watt was part of the heyday when lifeguards staffed towers at many of the parks including Sandbanks.

Lifeguard staff would undergo gruelling aptitude testing sessions and regular mock rescue and revival missions in terrible conditions that were so life-like, the public would often gather around with great concern until it was explained by staff there was no real danger.

Watt said wants to remind the public of that point and that drownings and near drownings could be reduced by a great number with a return of lifeguards even if the service was started at the aforementioned hot spots.

“In an ideal world, every beach would be staffed with lifeguards but of course there’s budget restrictions and cut backs but I would be open to at least a trial at those three beaches to start,” Watt said. “My overall goal would be to remind the public that we had a professional lifeguard service and it was dismantled slowly, life guard towers were literally burned to the ground where they stood and the public paid for it.”

In a life saving situation in the water, every second is key to a successful outcome but Tanner mentioned that near drownings come with a whole host of other issues.

Near drownings might look like success stories but victims are often left with brain damage due to lack of oxygen.

“Those are the ones that don’t get reported accurately,” Tanner said. “We speak with medical and health professionals and there’s plenty of instances where people suffer permanent brain injuries.

The Order of Canada recipient who medaled at the 1968 Olympic Games in Mexico City and was nicknamed ‘Mighty Mouse’ by the media said that growing up around shorelines and in the pool as a competitive swimmer helped her have great respect for the water.

And while most Prince Edward County natives have grown up around an unrelenting Lake Ontario waterfront where waves, rip currents and undertows are taught to be avoided, a tourist that has travelled for up to four hours by car or bus to enjoy perhaps their only visit to Sandbanks might not be so wary about adverse conditions.

“Drowning doesn’t discriminate and it can happen to anyone at anytime,” Tanner said. “That’s why we advocate for lifeguards for every swimmer’s sake.”

The impetus of bringing  lifeguards back to high volume provincial parks beaches in the province is not strange territory for the Ontario government.

In 2010, based on research material submitted by Watt to Ontario’s Chief Coroner’s office, a summary of recommendations in the aftermath of drowning deaths called that the Ministry start reporting near drownings and that the MNR, municipalities and  other recreation and private parks where there is numerous high volume of swimmers “that Lifeguards be present.”

“We are going to keep up this cause. We’’ve got three billboards at Wasaga and we might install one near Sandbanks as well just so people are aware of what they are getting into when they come swimming here,” Watt added.