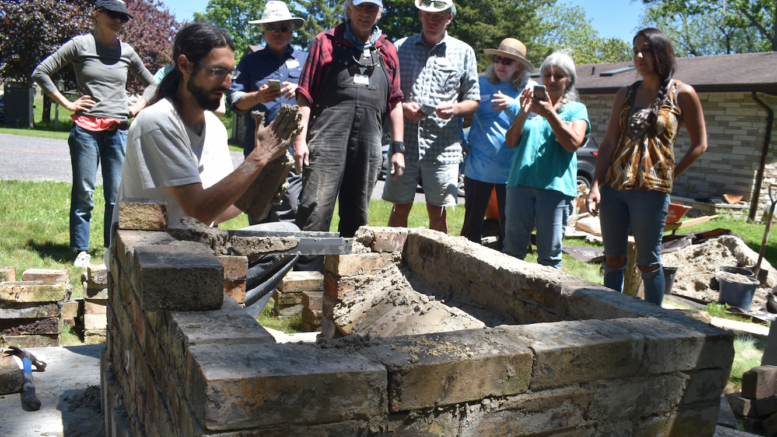 A partnership between Loyalist College and a local Bed and Breakfast operator has resulted in a outdoor clay barrel oven being installed in South Marysburgh.

And quite likely at least a dozen similar cooking installations across Prince Edward County.

Upwards of a dozen interested students congregated at Black River Bed & Breakfast this weekend to learn how to build a clay barrel oven through the instruction of program instructor Salvador Santinoli.

A native of South America, Santinoli has built a dozen clay ovens in his home region as well as four in Canada. 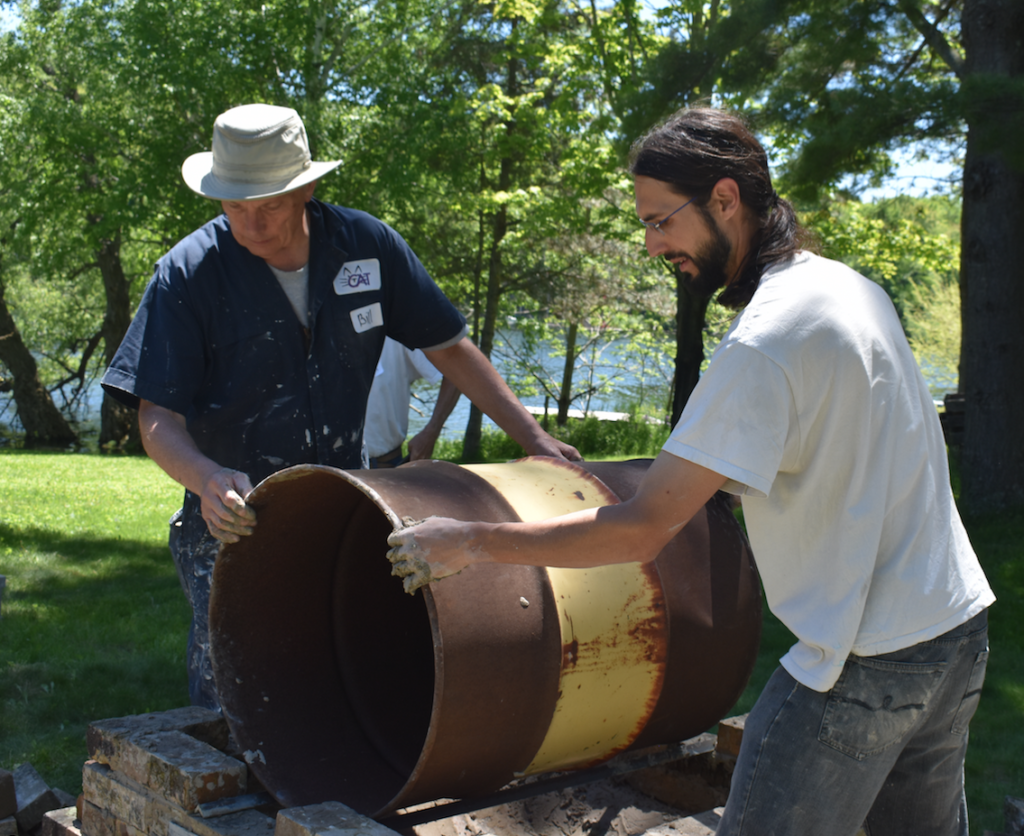 Salvador Santinoli and a program participant place a dummy barrel to guide with the clay building process. (Jason Parks/Gazette Staff)

The genius of outdoor clay barrel ovens is such that they don’t require a large fuel source can reach cooking temperature rapidly.

Fire that can be produced from limbs and brush make contact with the bottom and wrap tightly around the barrel as flames travel from a carefully constructed fire chamber area between the metal barrel and the surrounding bricks.

Contact between fire and the metal barrel concentrates heat for cooking and allows the oven to heat up so fast.

Virtually any type can be cooked in a clay barrel oven from breads and pizzas to turkeys and roasts.

“In South America and elsewhere in developing countries, they don’t have access to ovens all the time,” Santinoli told the Gazette. “Last time we were in Peru, we were noticing that having an oven was a bit of a luxury and status. These are a great way to get around that, they can be low cost and they can be built in communities for communal use.”

Previous to this weekend’s installation at the Black River B&B, Santinoli had taught a pair of two day courses through Loyalist that saw similar clay barrel ovens built on public land spaces in Maynooth and Bancroft.

Black River Bed & Breakfast owner Conrad Biernacki explained he became interested in taking the two day course when he saw it offered in the College’s Continuing Education magazine a few years ago, however scheduling conflicts kept him from enrolling in the program.

“Finally I contacted (Program Coordinator) Maureen Kelly and wondered about the possibility of running it in Prince Edward County at our home and they were willing to try,” Biernacki explained.

This weekend’s build was the first time Loyalist has not utilized public land and it was the responsibility of Black River Bed & Breakfast to source and secure all building materials.

“We get the benefit of having the clay barrel oven and, for the students, the course registration costs are half of what they might be otherwise,” Biernacki added. “Everyone benefits in this way and I’m happy Loyalist College had the flexibility to approach it this manner. We had an advertisement in the Picton Gazette and through that advertisement we had the minimum (seven students) to run the course. Overall, we have about a dozen people here learning how to make a barrel oven.”

Biernacki said a reunion of the class was planed for the fall and that would give him an opportunity to learn the nuances of cooking with a clay barrel oven as well as determine a menu.

Throughout the course’s duration, Santinoli and his partner Urpi would direct students, get them on the right path for each task and guide them through to the next step.

Santinoli said that once participants get their hands immersed in the clay, the process becomes like second nature.

“It’s a bit of ancestral memory that comes from building with clay because most parts of the world had clay housing at some point. Even here, you had indigenous people who lived in wigwams which were created with clay and sticks and, going back to the United Kingdom, the ancestors used cob so these things go back thousands of years and I find people have an natural inclination regarding how to use and spread the clay,” Santinoli added.

“You can read about it or watch a video but when you see the process unfold in front to you, it’s a much better process and learning experience,” he said, adding it was wonderful to think this two-day course would lead to other clay barrel ovens popping up all over Prince Edward County.

“We have the possibility of a dozen offshoots springing up all from this course,” Biernacki said.