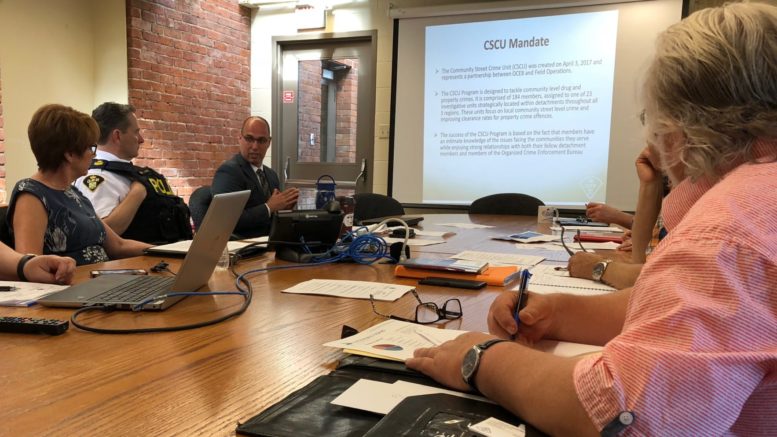 An interconnected department within regional OPP detachments in eastern Ontario continue to produce results and crack down on drug and street crime.

Detective Staff Sergeant Chad Culbert was at Thursday’s Prince Edward County’s Police Services Board Meeting to discuss the the OPP’s Community Street Crime Unit and how it serves communities in the region.

Culbert explained Community Street Crime Unit (CSCU) was created in April, 2017 and represents a partnership between Organized Crime Enforcement Buearu and Field Operations. The CSCU Program is designed to tackle community level drug and property crimes and is comprised of 184 members assigned to one of 23 investigative units strategically located within detachments throughout all five regions.

“There’s a direct correlation in street level drug crimes and property offences. It’s the same people-The people who do drugs have to find a away to pay for their habits,” Culbert said. “The success of the CSCU Program is based on the fact that members have an intimate knowledge of the issues facing the communities they serve while enjoying strong relationships with both their fellow detachment members and members of the Organized Crime Enforcement Bureau.”

Culbert said invetigators on the team are from the various detachments and have good lay of the land when it comes to what’s happening on the street and also maintain a good relationship with the rank and file officers that are on the front line.

The Unit utilizes analytics to allow for more efficient and indepth servailaince and investigation.

“If we are going to do survailance on an individual, we like to use analytics first,” Culbert said

Statistical paramters indicate trends such as habitual time periods of activity helping investigators hone on in prime hours of operation.

“Therefore we aren’t wasting our time on overtime, we can actually gear our investigation and be far more effective,” he said.

Among the more recent local investigations and seizures:

“We’ve alomst laid as much drug and property crime charges as we have traffic tickets,” Culbert said. “That shows where we have to make the reinvestment and I can’t take credit for it, it’s the team members in each community going out and doing the hard work.”

Despite a high volume, Culbert said the East Region hasn’t lost an investigation due to court overburden.

Through Community Watch Program, the Unit also undertakes a Community Mobilization and Engagement-an outreach of intiatives including Crime Prevention Through Environmental Design, Safeguarding your home, Crime Stoppers, Lock it or Lose it, Robbery Prevention Program and Protect Your Property.

Locally, it appears the hard work of the members of the unit and the OPP front line officers are making a dent in property crime numbers.

And while the test under $5,000 showed a slight increase in the YTD numbers, Hatch mentioned a number of those were simply motorists forgetting  to pay for gas after pumping at a self-serve station.

“They get reported in the system as a theft but they usually wind up getting cleared pretty quickly when we make contact with the driver and the motorists return to the station to pay for their gas,” Hatch told the board. “Overall, I’m pleased with the numbers so far in 2019.”