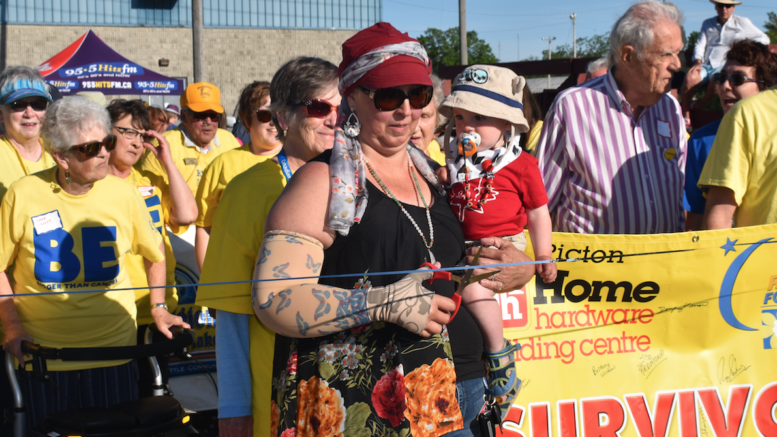 SHARING A MOMENT- Cheryl Brough and her grandson Calvin had the honour of opening the 2019 Prince Edward County Relay for Life Friday. The Hillier resident was this year’s Survivor Speaker (Jason Parks/Gazette Staff

Cancer warriors turned out on Friday night to fight back against the dreaded disease and commemorate ten years of Relay for Life in Prince Edward County.
Pleasant weather and sun-soaked skies befit a gathering that not only broke its goal in terms of fundraising for the Canadian Cancer Society (CCS) but also toasted a decade of a local Relay for Life event in our community.
Celebrating survivors, remembering loved ones and raising money all while mixing in doses of fellowship, fun and frivolity has been the trademark of local Relay for Life events in Picton.
All told, the event raised in excess of $47,000, eclipsing the $40,000 goal set by organizers with a more finite total to be announced in the coming days.
Friday night’s total brings the ten year cumulative amount of money raised through Rely for Life in Prince Edward County for cancer research and treatment supports administered by the CCS to $1.3 million.
In bringing greetings from municipal council at the event’s opening ceremonies, Mayor Steve Ferguson said he looked forward to a day when events like this were a thing of the past because through research, cancer had been eradicated.
Until that wonderous day, this community will continue to rally for causes such as this and Ferguson said the community spirit in Prince Edward County, so plainly evident on Friday evening, left him impressed. 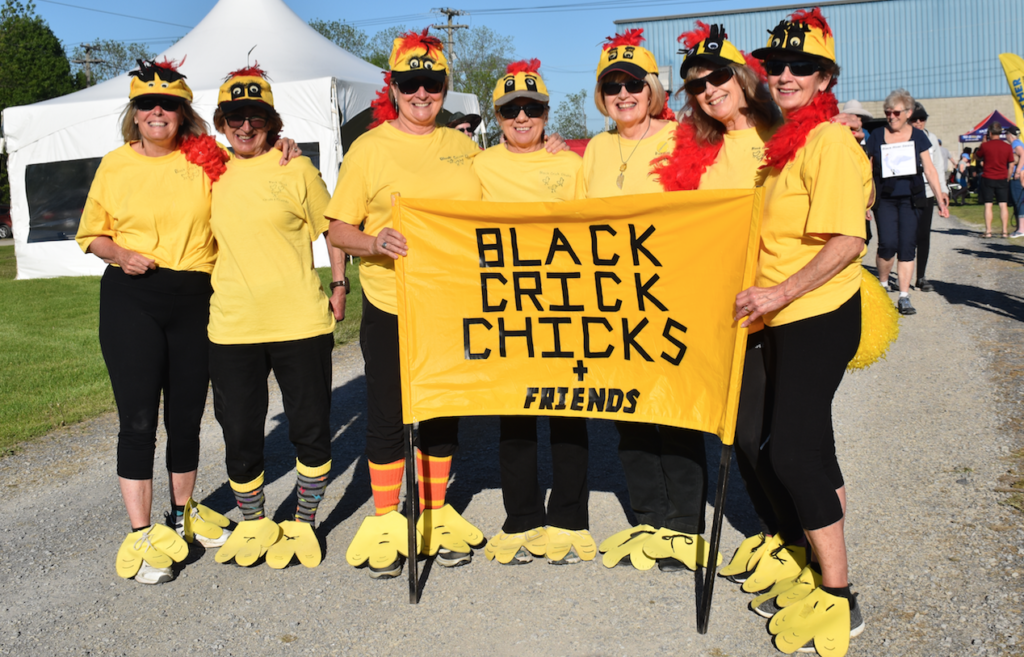 “Your attendance and fundraising efforts mean so much to the families who have experienced this diseases and I don’t know a single person who hasn’t been affected by cancer,” Ferguson said.
Lola McMurter of the Quinte-area branch of the Canadian Cancer Society said far too many Canadians understand how cancer can change everything.
“Either through our own diagnosis or that of a loved one or friend. We are all here because cancer touched our lives and as a community, we are bigger than cancer,” she said
As the Picton event reached the decade mark, Relay for Life events have been going on for 20 years across Canada and McMurter explained in that time, teams of family, friends and colleagues have joined together to celebrate survivors, remember those who have been lost and commit to raising funds.
Those funds have assisted in driving leading edge research developments on how to treat and defeat all types of cancer as well as support vital services for those people undergoing treatment.
Locally in Prince Edward County, 217 people in this community being driven to life-saving cancer treatment procedures through the CCS Wheels of Hope program.
Meanwhile more recently, cutting edge research has yielded new ways to treat and create better outcomes for those diagnoses with pancreatic cancer.
McMurter pointed to the people wearing yellow shirts on Friday night that indicated they had fought and beaten back cancer.
“You are proof positive that what we are all doing today is working. It’s proof that research is working and that we have the power to save lives and change lives,” McMurter added.
The 2019 Survivor Speaker was Hillier’s Cheryl Brough who spoke passionately, telling of her journey, how she’s been supported and how she’s meeting her cancer challenge head on.
Emphatically, Brough stated more than once during her address she’s “Not a cancer survivor, I’m a cancer warrior.”
Brough recalled the date, Oct. 14, 2010, when she was told she had breast cancer. Numb with pain, knowing her family would be devastated that same evening the nursing home where her mother lived called to inform Brough of her mom’s passing.
“A double whammy,” Brough said.
But with solid family support, the County resident stood strong and brave, ready for the next 18 months which included chemotherapy, radiation, surgery and all the side effects.
“There were a lot of tears but laughter and good times dried a lot of those tears,” she remembered.
Brough said she tried to maintain as normal a life as possible and, after treatment, she took her maintenence drugs, attended check ups and soon, five years had passed.
“Life was good, my family has grown and I’m well on my way to that ten year mark,”Brough said. “To be told you have cancer is hard nut to swallow. To be told your breast cancer has returned is like a 2×4 to the side of your head. They are the worst words a cancer survivor has to hear.
A diagnosis of stage four metastatic breast cancer was treatable but not curable.
“Not so great but I hear treatable and I can work with that,” Brough said. “Since my first diagnosis my grandson Calvin has come into my life and he’s my bestest medicine.”
Since that first diagnosis, the cancer fighting landscape has changed as well.
“In eight years oncology has grown in major ways and if you think fundraisers like this one aren’t doing anything, think again,” she said.”The tests I had to do in Kingston last time are now available in Belleville and there more oncologists added to relieve wait times and more nurses and better amenities.”
And more and better treatment options including experimental drugs.
“This time, there’s hair loss but no nausea, again, this is an improvement and I know I’m in the hands of the very best so I stay positive because I’m not done yet. I’ve got a long bucket list is long and unfinished,” she said.
After completing her survivor lap with her grandson in her arms, Brough told the Gazette she wanted to share the real end of having cancer “not just the medical stuff” including the emotions a cancer patient runs through.
Brough shares her journey through social media postings that are benefical to both those who might be going through the same struggle as well for herself on her journey.
“It makes you stop and think to not sweat the small stuff, do what you can when you can, embrace the journey and as I said, my bucket list is long and I plan on crossing everything off it,” she said.
Among the many longstanding teams of Relay for Life participants taking part Friday were the Black Crick Chicks.
The group actually predates the Picton Relay for Life event by five years and was taking part in its 15th Relay for Life event on Friday.
Team member Brenda Bond explained cancer has touched every family in the circle of friends who work hard almost on a yearly basis to raise money for the CCS.
“It has touched every one of our families and one of our chicks had the battle of going through chemo and radiation and we support her. We have a good time, raise a lot of money and try to keep the spirit going,” she added.