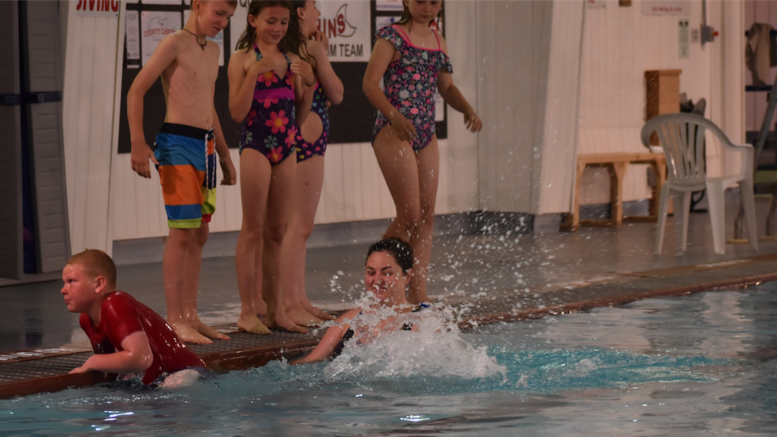 With the outdoor swimming season about to kick off, local Grade 3 students have been learning their strokes and treading water as part of a Swim to Survive program at PEFAC.

The program, which has been running for over  a decade, is open to Grade 3 students throughout the County and students generally partake between January and June and is wrapping up for another school year. Before the students descended to wade in the water, life guard and swim coach Krista MacPherson took some time to speak with the Gazette Thursday morning.

“You see the progress-some kids are terrified in the beginning,” said Macpherson, “They’ll be hanging on to pool noodles and instructors in the beginning but then by the third week they’re often more independent,” she said.

Living on an island where children are never more than a ten minute car ride from a beach, swimming skills are vital.

“It is really good to see that they’re progressing, especially in a place surrounded by water, it’s really good to give parents and kids an idea of the kids swimming abilities,” continued MacPherson.

Some of the goals of the program are: a roll into the water, a 50 metre swim and a tread on water for one minute.

“The first week we introduce these skills and assess where everyone is at, then the subsequent weeks are spent working on those skills and ‘piecing them together,’” said MacPherson.“We do keep track of how the students are doing and try to strive each year to meet or go above the goal that we had last year,” she added.

As the students from Sophiasburgh Central School shuffled into the pool area their excitement was palpable as they chatted amongst themselves before beginning their session. With MacPherson’s help, the session began with each student rolling into the water successfully, albeit with varying degrees of confidence.

The Swim to Survive program is also funded partially by PEFAC however it relies heavily on sponsorship.

Sponsors donate all different amounts of money that goes directly towards the program.