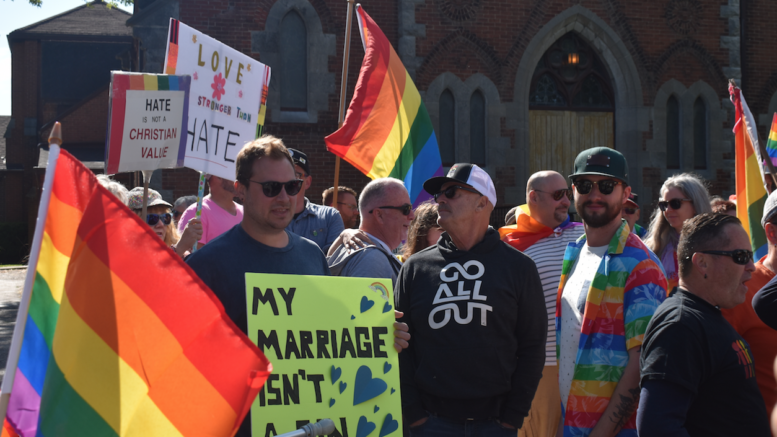 SHOWING PRIDE- Around 600 members of the local LGBTQ2S+ community and like minded supporters protested in front of St. Gregory's Church on Sunday morning after a portion of the church's bulletin calling for Catholics and Christians to not attend Pride celebrations. (Jason Parks/Gazette Staff)

The pride of Prince Edward County’s LGBTQ2S+ community and its supporters came shining through on a sunny Sunday morning in Picton.

Hurt and offended by comments made in a church bulletin regarding participation in local Pride festivities, upwards of 600 people gathered in front of St. Gregory the Great Roman Catholic Church prior to mass Sunday morning to protest the position of local clergy.

Father Robert Chisholm’s posting in a recent church bulletin that was shared on the church’s website that “Catholics and all other Christians should not  attend LGBTQ2 Pride Month events as they promote a culture and encourage activities contrary to Christian faith and morals” drew the ire of many in this progressive and inclusive community.

Chisholm said those activities were especially harmful to children because it “could lead them away from God’s revealed Truth.” 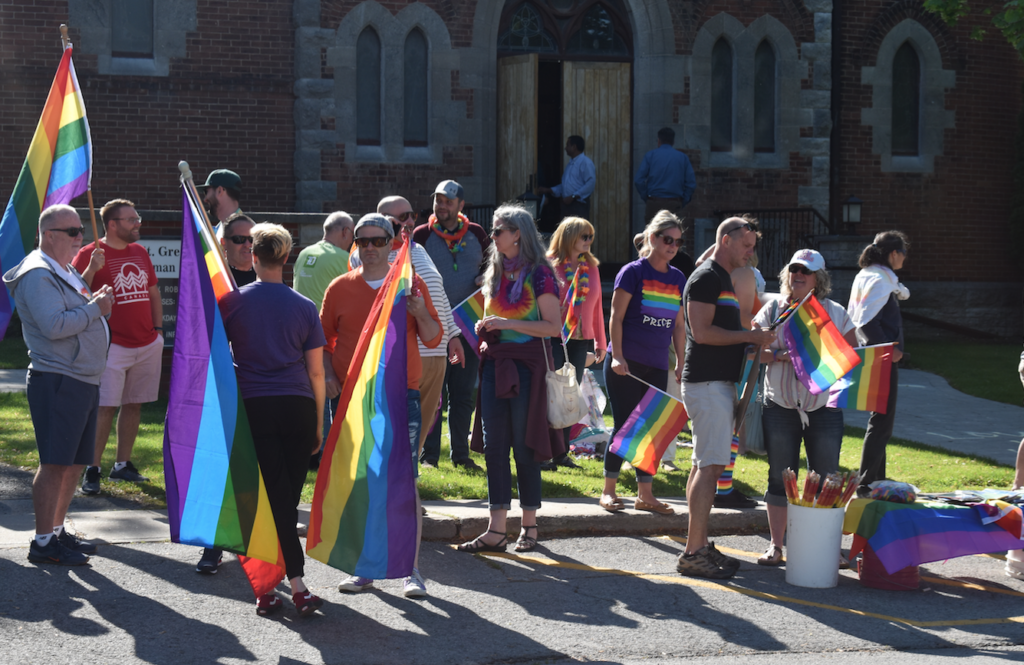 The Father went on to write erroneously the Pride banners affixed to light posts in Picton’s downtown core are courtesy of the Government and were “your tax dollars at work!”

An email inquiry to the church by the Gazette on Thursday afternoon went unanswered but Father Chisolm reportedly told a number of media outlets he was “protecting his flock” and was promoting “the Catholic teaching.”

The comments were shared online through social media on Thursday and quickly went viral in the Quinte community.

Parents of school children at the adjoining publicly funded St. Greg’s Catholic Elementary school were shocked and many on social media said they would not allow their children to attend Friday morning mass.

In a demonstration of inclusion, several St. Greg’s staff members, adorned in rainbow colours, appeared at the bus loading zone with a banner indicating the school was a ‘safe space.’

On Friday,Michael Mulhall, Archbishop of Kingston responded to the escalating outcry by issuing a statement indicating he was aware of the bulletin material.

“I did not sanction this message, and it does not reflect the spirit of accompanying charity and compassion that should always characterize our faith,” Mulhall said. “The Archdiocese has spoken with the pastor of the parish. (Father Chisholm) regrets any hurt that his inappropriate comments have caused.”

Furthermore, St. Greg’s principal Kevin Dorey said in a letter home to parents that the “(ALCDSB) recognizes the inherit dignity of each person as created in the image of and likeness of God. As such, in our Catholic schools we welcome and respect everyone regardless of race, gender, age, stage of development, disability, sexual orientation, gender, identity, class or religion.” 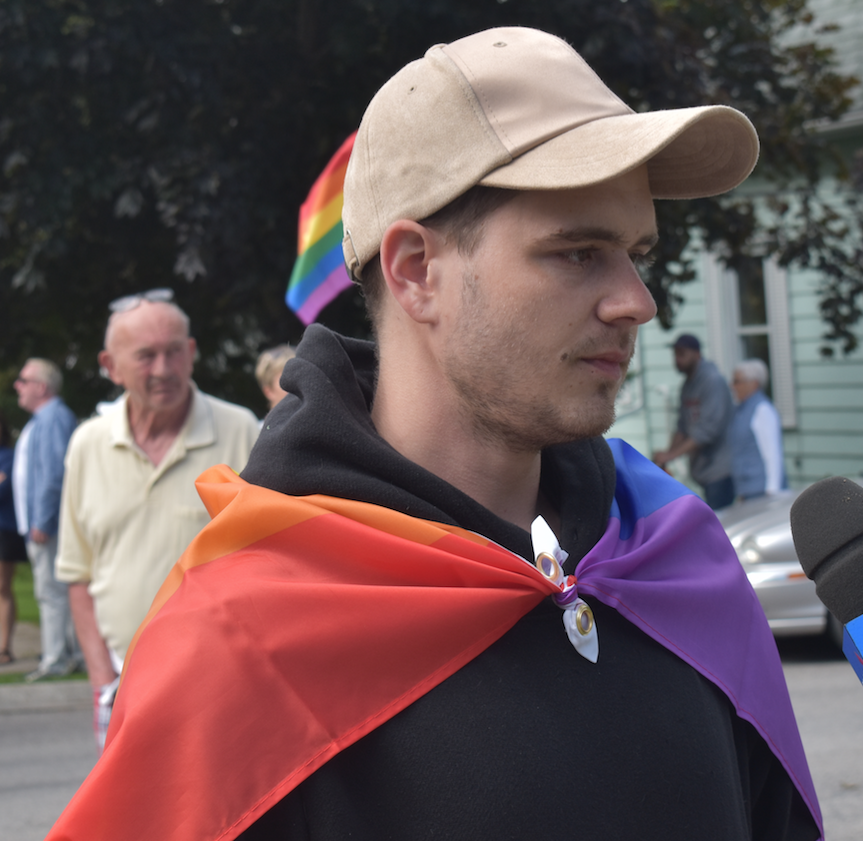 These acknowledgements did little if anything to assuage the LGBTQ2S+ community and many, many supporters who gathered Sunday morning in peaceful protest to let Father Chisholm and St. Greg’s parishioners know this position on homosexuality and Pride festivities in Prince Edward County would not go unchallenged.

Protest organizer Curtis Jeffery said when he first read the bulletin material he thought it was a “joke” or some type of prank to make the Catholic Church look bad.

“Come to find out it’s totally real and that Father Chisholm is defending it,” Jeffery told the Gazette.

Looking at the crowd, Jeffery, a County native, said it was  incredible to see the groundswell of community support the event garnered and that people are opposing Chisholm’s message.

Jeffery added it was also interesting to see via social media a number of St. Greg’s parishioners state publicly they opposed this position.

“There hasn’t been direct contact with myself but a number of people have stated clearly they love and accept everyone and they oppose this type of message,” Jeffery said.

In terms of the comments from the ALCDSB and the Kingston Archdiocese that distanced those organizations, Jeffery said it’s good to see that separation.

“I just don’t know what he’s thinking especially after the Pope himself gave an affirmation (to the LGBTQ2S community),” Jeffery said.

Pope Francis has mentioned the need for the Catholic Church to show welcome, love and compassion for people regardless of sexual orientation.

Prince Edward County Mayor Steve Ferguson and past Mayor Robert Quaiff were both in attendance on Sunday and Ferguson said in a statement he was “disappointed” to read critical remarks about Pride activities in the St. Gregory parish bulletin.

Picton area business owner Nat Wollenberg was the genesis behind the pride flag installation, approaching the Picton Business Improvement Association about the possibility of local businesses purchasing and hanging rainbow banners in the downtown core.

The BIA facilitated this initiative and the installation was not undertaken by a branch of government as was alluded to in Chisholm’s posting.

“This is great turnout that shows the positivity in our community,” Wollenberg told the Gazette. “It’s a clear representation this was one man speaking and unfortunately, when the ugly voice is speaking, that’s what hear.”

The local business owner added follow up statements from the archdiocese left her unconvinced there was any contrition from Chisholm.

“I think the statements from the Archdiocese was incredibly shallow and hollow because they say the man has regret from the hurt that he’s caused but up until Saturday, he was still making comments that he needed to protect his flock so that’s not a person that has regret, that’s a blanket statement from the Catholic church,” She said.

On the other hand, Wollenberg saluted St. Greg’s staff members who had the courage to welcome students the the school on Friday with a sign of love and acceptance.

“There is so much respect today for the teachers to take that one and do that and show that solidarity with the LGBTQ2 community,” Wollenberg said. “it really shows it is just one man, Father Chisholm, is speaking for himself.”

Jeffery, who identifies as pansexual, added this was a positive sign in all the protesting on Sunday.

“No one should have to perceive (Chisholm’s words) as valid education,” he added.