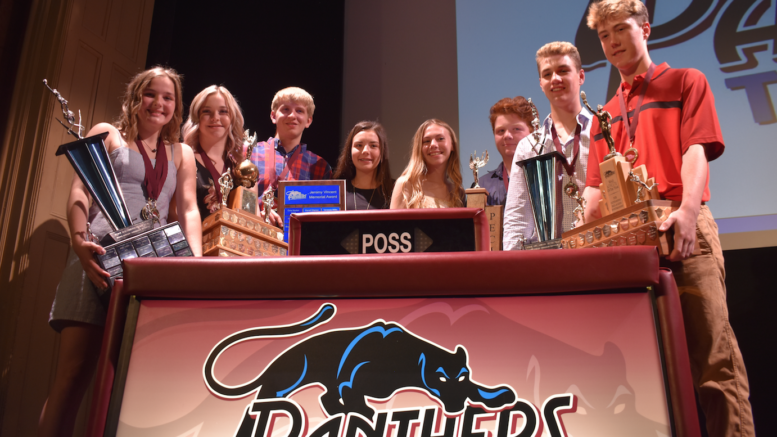 The talented athletes at Prince Edward Collegiate Institute traded in their kits, sweaters and jerseys for finer formal wear on Wednesday night as the school’s Athletic Council hosted the school’s annual sports awards gala at the Regent Theatre.

PECI’s athletic director Laurie Spencer said the school’s athletic council were thrilled to celebrate the accomplishments of the student-athletes at its annual celebration at the Regent Theatre.

“Rob Garden and I get to work with the Athletic Council throughout the year to prepare this culminating event,” Spencer told the Gazette. “It is always a fantastic evening and it didn’t disappoint once again.  Our athletes provided us with plenty to celebrate in 2018-19.”

In terms of team celebrations, the PECI Panthers basketball program took huge steps this season on both the senior boys and girls sides. For the girls, the local squad captured its 3rd straight Bay of Quinte Championship, a COSSA Championship and made an OFSAA appearance in London.

Meanwhile, in terms of individual sports, junior badminton players Abby Conley and Cameron Pero were Bay of Quinte champions and qualified for COSSA.

Conley wound up going all the way and struck gold with doubles partner Hannah Goad at the Central Ontario Championships as well.

In presenting the team awards for the Senior Girls basketball program, coach Rob Garden said he could recall the start of the season and how the Panthers struggled out of the gate. 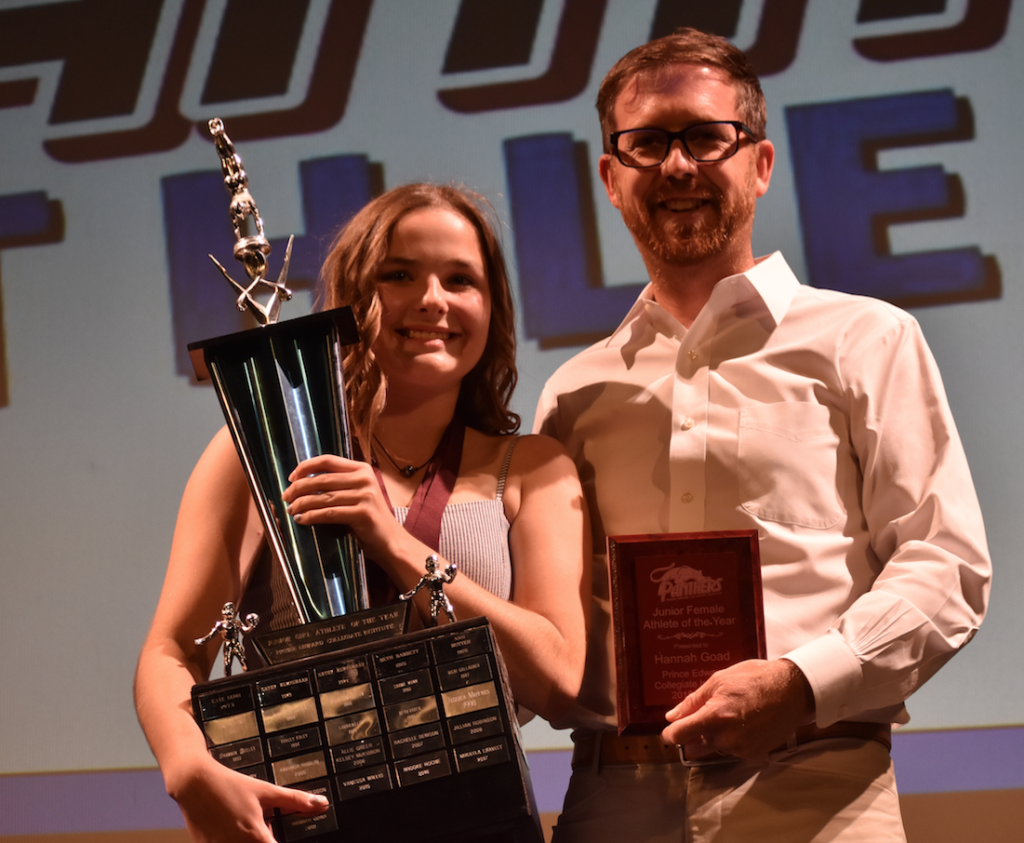 Garden wondered if perhaps the golden years of the program might come to an end in 2018-19.

A preseason thumping at the hands of the eventual OFSAA champion Timmins squad could have been telling.

“I remember talking to the girls after the game thinking ‘Im not sure we have it this year,’” Garden said. “But full credit goes to this group.  They stuck together, they worked extremely hard at practice and they slowly started to turn their season around. Our most signature win of the year was in the Bay of Quinte semi finals vs Nicholson.  We were playing in their gym, and the girls were dominant at both ends of the floor and won 64 – 42.”

PECI would go on to dominate the Bay of Quinte finals and COSSA.

“At OFSAA, they played three great games, and lost a heartbreaker by 2 points in their third game. We couldn’t be more proud of this group and the way they battled and never gave up,” Garden said.

In naming Mikayla Leavitt as the Panther’s Most Valuable Player, Garden said it was a tough choice as the club was as well rounded as its ever been in 2018-19. 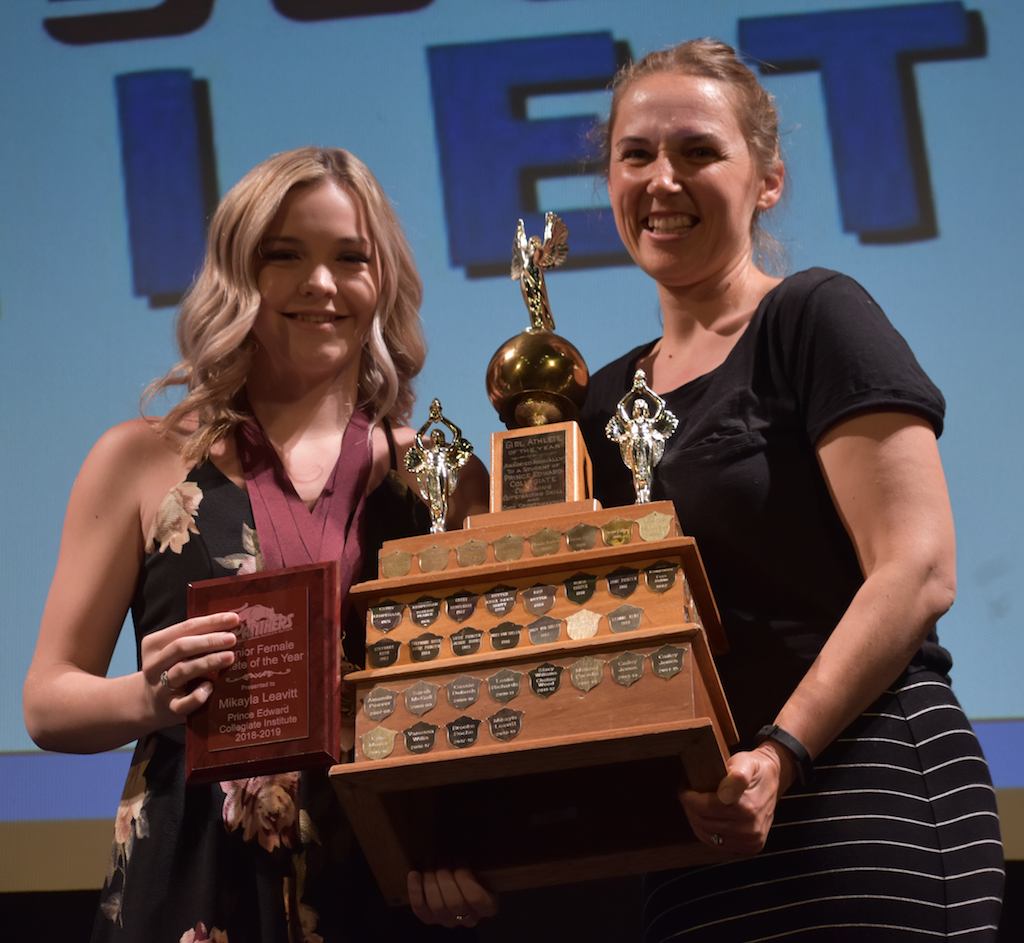 “She had some career games this year including a 27 point game vs. St. Theresa’s, she constantly defended some of the best players on the opposition team and she really became a great leader, both on and off the court this season. The best part is she’s back for a 5th year and will look to continue to grow and achieve her dream of playing at the post secondary level,” Garden said.

In presenting Alexa Prinzen the Most Dedicated Player award, Garden called the Bloomfield native ‘a glue girl’ who was fearless on the court and the club’s best teammate off the court.

“When things got tough, she kept it light. When a teammate did something great, she was the first one to give them a high five. And when she got on the court, she was fearless,” Garden said. “We’re experiencing a generation of athlete who thinks largely of themselves first, however not this player, and she was a true difference maker for our team this year.”

In announcing the Senior Boys Basketball award winners, Garden spoke of the magical 2018-19 season and how unselfish play and a hold-nothing-back attitude pushed the program to the pinnacle  of a mountain that had stymied PECI for generations.

“We knew that we had the talent, but to be completely honest, we’ve had talent before, but we’ve never had warriors who could get to the next level. This group competed against some great teams this year and they never backed down.  They played the eventual Gold  and Silver medal OFSAA winners and they held their own. They were tough, fast, smart and great teammates.  This group didn’t care who scored or made great played, because they supported each other,” Garden said. 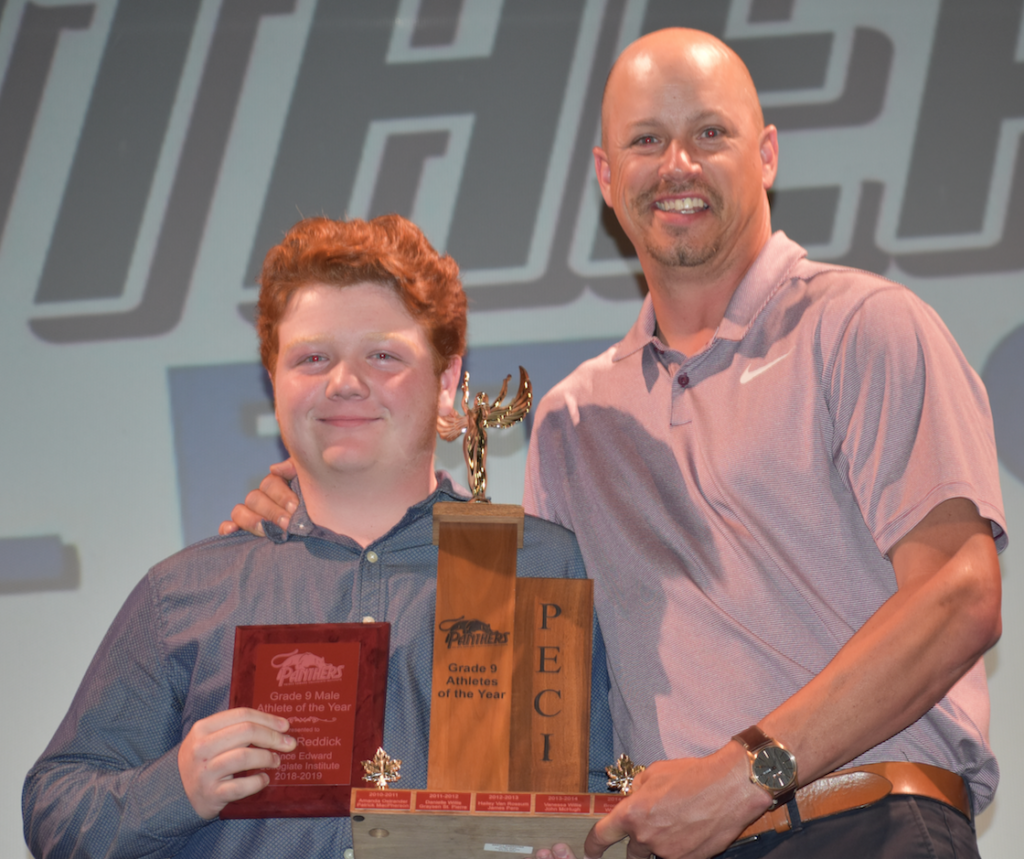 “They picked up a win vs the #14 seed from Orillia and gave the #1 seed a pretty good scare for the first half. Truly, a once in a lifetime season and something this group should be very proud of,” Garden added.

Forward Alex Arsenault was chosen as the club’s MVP and Garden called the fourth year senior a natural athlete who is just starting to understand how to be a basketball player.

“He is able to dominate at both ends of the court. Often times, when he would miss a shot, he’d be the first one to the ball, get his own rebound and put it back in. He was our emotional leader on the court and when he wanted to, he had a unique ability to take over a game.  He impressed scouts at OFSAA and he has a very bright future ahead of him as he returns for a 5th year in the hopes of playing at the post secondary level,” the coach stated.

Garden presented Devon Wilton as the club’s Most Improved Player, explaining the fourth year guard has earned the award over his four years of service to the Panthers program. 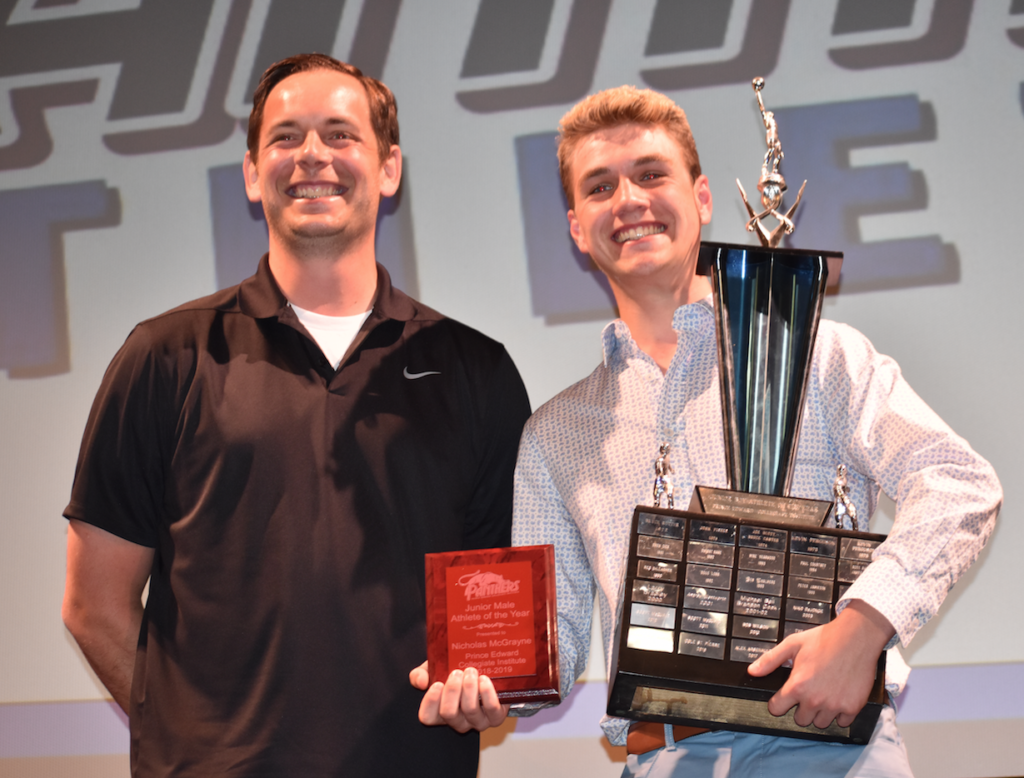 “After years of hard work he stepped up this season to lead the team from the point guard position,” Garden added. “He was calm under pressure, pushed the ball in transition and hit some big three-pointers at some clutch moments.”

The PECI Baseball team accepted its Bay of Quinte banner as the champions of 2019 as the squad went undefeated in the regular season and Bay of Quinte playoffs.

Skipper Matt Ronan recalled the club gathering in the snowy February weather to take indoor practice at the gym and the team of 19 was dedicated to the team goal of finishing on top of the Bay of Quinte heap.

“In the 10 year history of Bay of Quinte Baseball, the Panthers have won seven Bay of Quinte titles, won COSSA 5 times and represented at OFSAA 5 times. Our school of 500 consistently battles and defeats schools more than twice it size and this year was no different,” Ronan said. “The Panthers went 9-1, were the Bay of Quinte Champions and COSSA Silver Medalists. Led by senior versititle leaders like four year starter Ben Wells, the Panthers truly had a tremendous season.”

The club had dual MVPs in 2019 as pitchers Brodie Byford and Will Ronan earned the nods.

Both were dominant from the hill and at the dish. 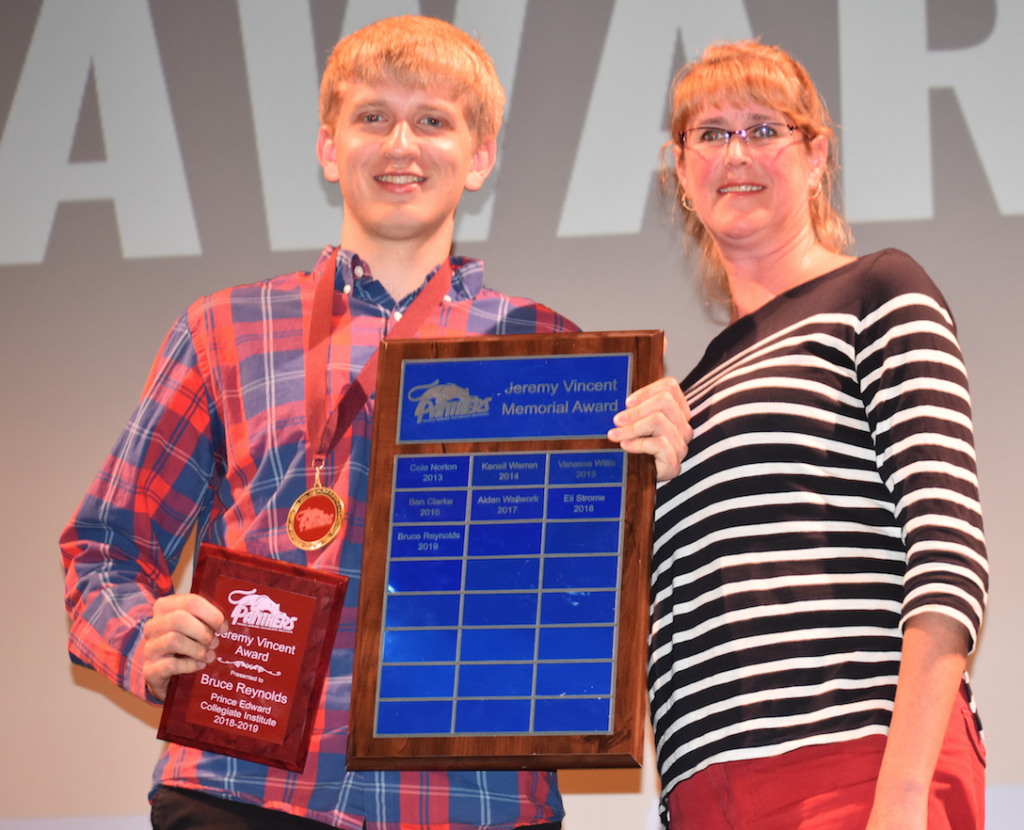 “Will Ronan pitched the win for Game 1 COSSA and Brodie Byford shut down both Crestwood and St. Peters in two very gutty performances,” Matt Ronan said. “On offence, Ronan led the Panthers in COSSA going 8-9 with 4 RBIs while crossing the plate 5 times and Byford went 5-9 with 2 RBIs.”

In terms of individual awards, the school handed out its annual Athletes of the Year awards as well as a specialized award.

Beth Nicholls explained that for the last three seasons, Reynolds has dedicated himself to a discipline that PECI has had little involvement in historically.

“For the last three seasons, Bruce has gone over to Belleville to train with a coach from another school at Mary Ann Sills. He has, through his own dedication and determination, managed to get himself to the track in Belleville regularly to learn the sport of Pole Vaulting,” Nicholls said.  “Qualifying for East Regional’s with a first place finish in COSSA 3 years in a row Bruce further improved earning himself a new personal best height.”

In terms of Grade 9 Female Athlete of the Year, Vanessa Wilton and Lauren Smith shared the honour in 2018-19 as standouts on the soccer, volleyball and basketball teams.

The Male honour went to Aiden Reddick who started at third base for the baseball team and made meaningful contributions to the hockey and volleyball teams. 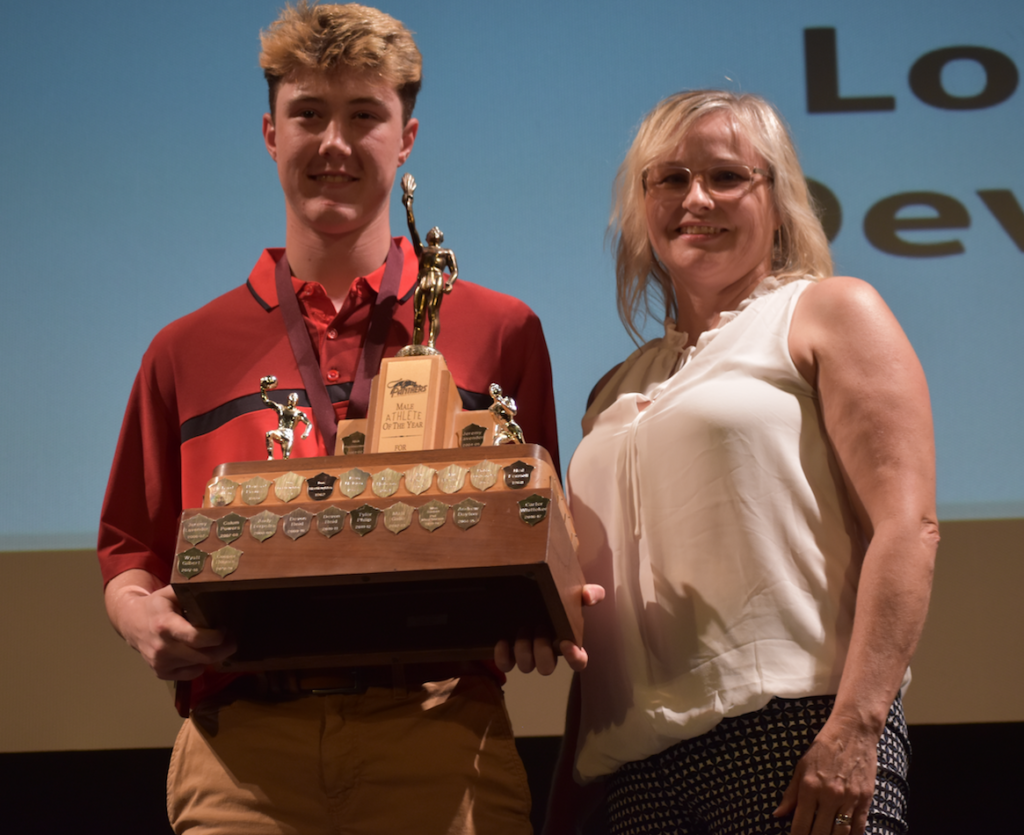 “Her resume speaks for itself. However, what impresses me most about this athlete is her tenacity and desire to win. She’s not the biggest athlete, however she never backs down from a challenge.  I’ m accustomed to give an intro like this for senior athletes, however we need to remember that this individual is only in grade 10 and her brightest years are yet to come,” Coach Jenny Lyons said.

The Junior Male Athlete of the Year went to Nic McGrayne who was backstop for both the hockey team and baseball team.

Equally competent at stopping pucks and baseballs, the Sophiasburgh native was also a threat at the plate and served as an emotional leader for a young hockey club that’s on the rise.

A star on the basketball court, Leavitt felt at home on the volleyball court and the soccer pitch as well and was team MVP for all three squads.

There was little doubt Mikayla Leavitt was going to by the Senior Female Athlete of the Year.

“She plays her game with a natural talent, as well as a drive and determination to work hard in order to develop her talent. She completes with a mindset of playing smart, executing plays and following her instinct as she increases the chances of scoring for her team. And finally, she competes with intensity, passion and grit that does not falter until the game is done,” Garden said.

Baseball and soccer standout Cooper Rogers was honoured at the PECI Senior Male Athlete of the Year.

A field general for the soccer club who commands the mid field position and PECI’s leadoff batter on the baseball club, the Bloomfield native balanced his secondary school athletic career with a busy hockey schedule as a 16-year-old defenceman with the Picton Pirates.

OPIE award for unselfishly contributing to interschool sports or the life of sports in the school- Jack MacCool and Brodie Byford for their service to the Athletic Council and Thomas Davies and Rebecca McCugh for their help in setting up and facilitating tournaments at the PECI Gymnasiums.