Members of a local intuitive looking to make the municipality plastics free presented their views at Thursday’s Committee of the whole meeting at Shire Hall.

Julie Miller and Debbie Rankin of Plastic Free PEC stood before council to make their deputation. The group,  formed in February  are still young but say they have irrefutable statistics on their side.

They began their deputation by saying, “Every piece of plastic ever produced still exists.”

After allowing that knowledge to sink in, Miller and Rankin continued

“There are more than 400,000 pieces of plastic per every square kilometre in the Great Lakes,” Miller said.

Armed with a litany of unsettling facts, such that Ontario sends a billion water bottles to landfill every year, the deputants urged councillors that Prince Edward County should move towards eliminating single use plastics.

“We would like to encourage Prince Edward County to eliminate single use plastics within municipal buildings and we want to educate households on reduction strategies,” said Miller, explaining that part of their mandate is to educate.

Recently the group was involved in fundraising in order to purchase a reusable water station for events. The station will be used for the first time at the upcoming Antique Boat Show and then again during the Canada Day festivities in Picton.

Speaking to council, Rankin and Miller stressed the small changes that can be made to reduce single use plastics.

“Our group is targeting what we like to call our ‘5-pronged approach’. It’s simple. We want to encourage everyone in the county to buy into swapping out 5 everyday items: plastic (throw away) water bottles, plastic grocery/retail bags, plastic produce bags, plastic straws, coffee cups and fast food soft drink cups (the cups with a  plastic inner lining),” Miller said. 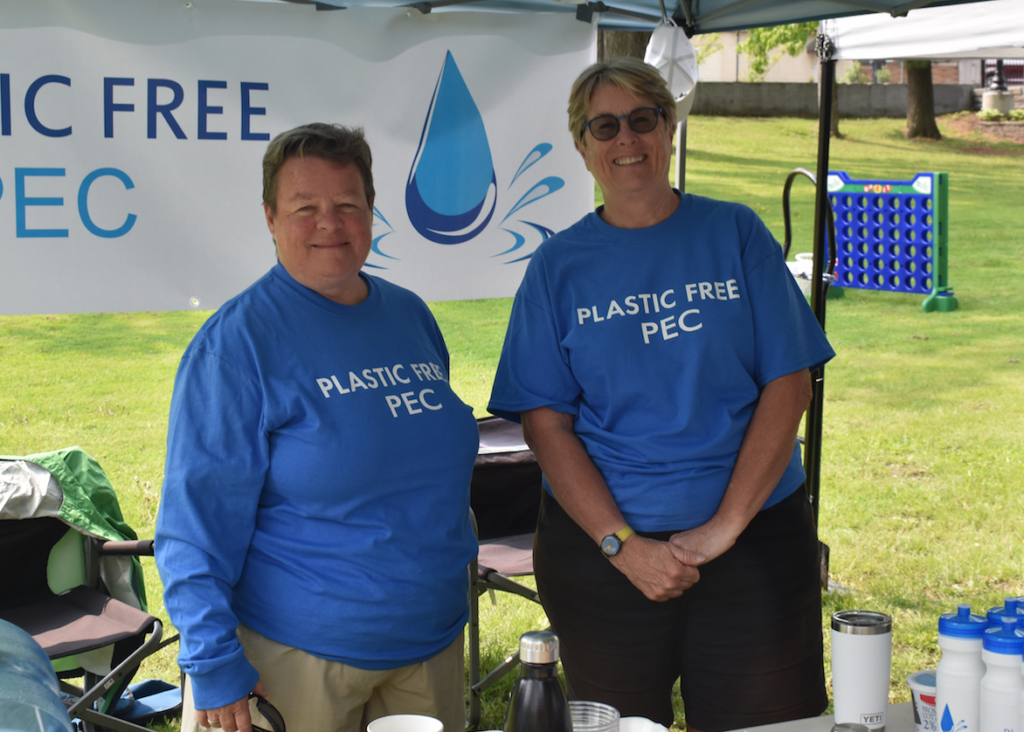 Apart from switching the above items for sustainable counterparts, the group is ruminating on other ways they can encourage people to reduce their plastic consumption.

“We are considering asking people to take a 30-Day Challenge. Try to go plastic free for 30 days and see how simple swapping out five items can be and how much of a difference it makes in your personal recycle box. If you can change a habit for 30 days, why not make it a lifetime?”

Apart from efforts to be made on the individual level, Rankin and Miller asked council to declare Plastic Free PEC as a project of public interest.

“Let’s brand ourselves as the first plastic free community in Canada,” urged Miller.

As an incentive, the pair suggested that businesses and individuals be offered reward stickers to be displayed on their property as a symbol of their dedication to reducing single-use plastics.

Should council decide to declare Plastic Free PEC a project of public interest, the group would be able to access more grants and other funding and they would be able to partner with charitable organizations.

“Because we are not charitable, we are not able to apply for several grants,” Miller explained. “A little bit more money would help with advocacy,” she continued.

After their deputation, Councillor Bill Roberts brought up his grave concern regarding plastics in the environment, citing a recent trip to Antartica, where approximately 90 per cent of marine debris are plastics.

Before concluding, Mayor Steve Ferguson added that he believes future generations will look back at the use of plastics and wonder, “What were they thinking?”

Councillor Roberts made a motion to receive the group’s deputation and refer it to staff for a report. The motion was seconded by Mayor Ferguson.