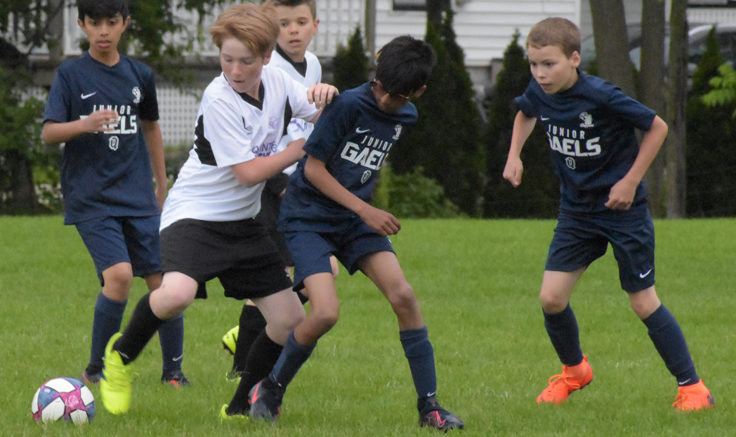 TAKE OFF (In white) Alex Pickle and Hayden Bender of the Quinte Ortho U12 Eagles try to move the ball into scoring position against the Kingston Clippers in SOSA action in Picton Thursday. (Jason Parks/Gazette Staff)

It took tournament play but the Quinte Ortho Prince Edward County Soccer Association U12 Eagles busted into the win column this weekend at the fourth annual Kingston United Soccer Festival.

After dropping games against the Seaway Valley Blazers and Whitby, the Eagles were able to hobble the Darlington Dash 4-0 thanks to three goals off the right boot of Hayden Bender.

Skipper Joel Porritt, a former PECI Panthers standout, has been the skipper of this core of players for the past three summers and said the club’s two losses to open the 2019 season certainly weren’t due to a lack of effort.

The Eagles fell to the visiting Kingston Clippers Forge club 2-1 on Thursday. Despite controlling most of the play in the first half, the Clippers were able to escape the talons of the Eagles defecnce for an opportunistic strike in the opening 35 minutes.

In the second, the Eagles went to work in the Clippers and wore down the Kingston defence. Finally, it was Bender finding time and space to boot one past the Clippers keeper to knot the game at 1-1.

The Eagles could have been up 2-1 in the second half if not for an offside call that washed out a PECSA goal.

It seemed like only a matter of time until the hosts pulled ahead as the ball stayed in the Kingston half for nearly the entire frame. Eagles forward Lucas Hicks looked to have the Kingston goalie at his mercy with time winding down but the strike caught a gust of wind and grazed the top of the cross bar.

From the ensuing kick from the corner of the Kingston crease, a high bounding ball would wind up on the foot of a streaking Clipper striker who manoeuvered down field and banked a strike off the goal post and past the Eagles keeper with about five minutes to go.

The Eagles mounted pressure on the Clipper net but were unable to delver the ball to the goal line before full time.

“We had a lot of pressure at the beginning of the game and we carried about 70 per cent of the play,” Porritt told the Gazette Tuesday evening. “Both their goals came in the same way so it’s frustrating but we have to keep our heads up and work smarter.”

Porritt said the Eagles lost in much the same way on Monday against the visiting Kingston Clippers Valour squad. The Eagles controlled the ball more than the visitors but break downs lead to some easy strikes by the visitors from the Limestone City in a 4-3 setback.

“We were all over them for good stretches of the game but we broke down at some critical times and it cost us,” Porritt said. Bender, etc. had goals in the loss for the Eagles who are in Kingston tonight at John Machin field to battle Kingston United. Porritt said the squad has plenty of skill but needs to be able to operate in heavy traffic without shying away from the opposition.

“Right now, I think we need to work on our physicality and answering the challenge from the other teams, Porritt said. “I like how our structure has developed but it’s not quite where it needs to be as of yet.”

Soccer at this age level typically sees a transition. Where standouts and fast strikers have been able to blow past defenders, team structure and defence tend to eliminate that tactic and force players to start using one another as outlets. In other words, soccer is starting to become a thinking man’s game at this stage.