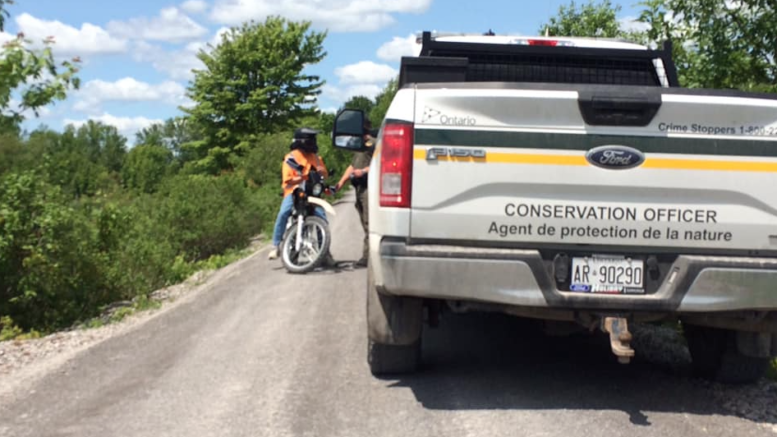 TALKING ON THE TRAIL- A Conservation Officer with the Ministry of Natural Resources and Forestry speaks with a person on a dirt bike on Sunday. (Facebook Photo)

With reported incidents involving cars and trucks illegally driving on the Millennium Trail, the Ontario Provincial Police are turing their eyes to the former Canadian National Railroad track-turned-multi-use trail that snakes through the heart of Prince Edward County.

On Sunday officers with the Snow Vehicle/All-Terrain Vehicle /Vessel Enforcement/Education (SAVE) Team of the Ontario Provincial Police (OPP) came to Prince Edward County to check for violators on Millennium Trail.

The Millennium Trail is a former railway that has been transformed into a multi-purpose trail and is 46 kilometres across Prince Edward County from Carrying Place through Consecon, Wellington & Bloomfield to Picton with various access points.

Instances of passenger vehicles on the Millennium Trail have been reported by regular trail users on social media and to the Prince Edward detachment of the OPP. (Facebook Photo)

In total, Police encountered over 100 people during the duration of their patrols and enforcement action was conducted with the following charges being laid:

In addition to those OVRA charges, OPP charged four individuals under  the Trespass to Property Act (TPA)

Provincial Constable Karen German told the Gazette members of the SAVE team, a regional resource shared by detachments in the East Region, started at the No Frill’s Store in Picton and made their way to the trail’s terminus at Carrying Place.

German confirmed that incoming traffic complaints by the public regarding passenger vehicles on the trail as well as other trail-related inquiries precipitated the visit from the SAVE unit to conduct a patrol on Sunday.

“It’s something that’s been on the radar and the timing of their visit was perfect,” German said.

The trail is open for use by pedestrians, cyclists, offroad vehicles that are properly registered and insured  as well as farm vehicles and self propelled agricultural implements.

All passenger cars and trucks are prohibited on the Millenium Trail, as are horse drawn wagons.
Horses with riders are permitted.
If the public notice a vehicle and suspect the person is there intentionally, they are asked to  call the OPP report line at 1-888-310-1122.  The public is asked never to call 911 on this issue.

The Constable called on all users to be cognizant of the rules that govern the Millennium Trail and that those enjoying the multi-use trail with a off road motor vehicle such as an ATV or a UTV (Side-by-side) should ensure they have the proper documentation (Insurance, ownership, licence, etc) and are obeying the applicable sections of the Highway Traffic Act and the OFVA.

German couldn’t confirm that those charged with trespassing on Sunday were driving motor vehicles on the trail, only that they were operating a type of motorized vehicle of some descriptor in an area where only pedestrian travel was permitted under the bylaws governing the Millennium Trail.

The Constable said that time and resource permitting, the OPP would be stepping up patrols on the trail and added that of the seven individuals charged on Sunday, four reside in Prince Edward County.

Although their patrol wasn’t co oridinated with the OPP, Conservation Officers with the Ministry of Natural Resources and Forestry confirmed with the Gazette they were also out on patrol on Saturday and Sunday, looking for contraventions of ORVA,  the TPA and Ontario’s Liquor Licence Act as well as checking fishing licences at the Lake Consecon dam crossing.