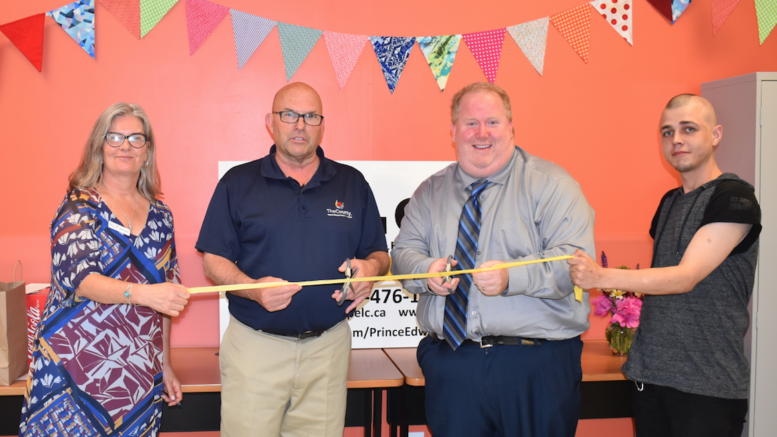 Prince Edward Learning Centre held their annual general meeting Thursday, opening their doors to the public to show just how bright the future is for many of their students.

The AGM is a chance for the public to get a glance at the varied activities and achievements of those who attend PELC. The AGM also lays bare the inner workings of PELC such as what the staff have been busy with for the past year.

The event was imbued with the spirit of hospitality, as flowers graced the tables in the classroom along with an assortment of refreshments.

According to their mandate, PELC, “supports all students pursuing learning goals through programming that increases literacy, contributes to educational upgrading, supports community involvement and assists with access to employment training.” But, many may not know how that translates to real-life learning.

On a day-to-day basis, staff at PELC could be doing many things, from helping students attain their driver’s license to teaching them about food insecurity.

The AGM was also an opportunity for PELC to showcase their newest location at 97 Main Street.

After several moves over the past couple of years PELC’s bright new space can accommodate many and, they hope, will do so for many years to come.

“The new space has allowed for enough room to do our best work. We are co-located with Loyola and are able to have a teacher and students on site. That’s a huge resource for our folks,” Kennedy states, “Being central and having a storefront has changed things I think. People who didn’t previously know about us can now walk in and find out bout us,” she continued.

Board of Directors’ President Jane MacDonald began the event with a heartfelt speech that shone a light on the importance of civic participation in institutions such as PELC. Perhaps more importantly, MacDonald highlighted the value of such involvement whether seen in students, staff or board members.

“It’s really important for everyone to participate the way they want, and the way they’re able,” enthused MacDonald.

Mayor Steve Ferguson was in attendance and praised the value of lifelong learning.

“I’m a firm believer, along with the council members, in the importance of lifelong learning, development and growth. What PELC is doing in this community is not only admirable but so valuable.”

Adam Bramburger, who was at the AGM on behalf of Bay of Quinte MPP Todd Smith, also spoke to the audience.

Bramburger noted that of the 200,000 new jobs recently created in Ontario, many are in the service industry. “PELC is so valuable because they’re mentoring and training people to fill those (service) jobs that we need and they’re doing it through training programs such as H.E.A.T and Inspire. Through the Ministry of Training, Colleges and Universities, we’re really proud to be able to support that,” Bramburger continued, “I really feel like PELC is giving us great value for the dollars that we spend as a province.”

As Bramburger mentioned, apart form helping individuals with basic literacy skills such as reading, writing, and mathematics, PELC also facilitate programs, such as Inspire, which is a Skills Link youth employment and education program. Over the past year, they had 30 participants in this program that helps match participants with a local employer.

Jonah Schein, Inspire Program Facilitator, spoke of the wide reaching scope of positions that they have been able to help people find through that program.

“Honestly, the work that participants do is truly inspiring,” said Schein, “I run into our students all over, whether that’s buying fish, at the drug store, or picking up my children from The Hub.”

Inspire aims to help those who face barriers to employment, and as Schein explains, those barriers might be more obvious than one might think.

Both a lack of year round work and a lack of affordable housing are considered to be significant barriers to employment. Sadly, these are common barriers here in Prince Edward County.

Of these, Les Bystrzycki took a moment to speak with the Gazette. He has been attending PELC since October 2018.

“I was diagnosed with early onset dementia, and working my brain helps it. I’m trying to keep myself from forgetting things,” said Bystrzycki, who is studying to obtain his Grade 12 diploma.

There are varied reasons why individuals attend PELC. However, much of what they have in common is the same- a will to improve their lives.

Kathy Kennedy, Executive Director of PELC, also took some time to speak with the Gazette.

Kennedy explained that in the past year, they have had 122 people registered at PELC.

“We really saw people make big gains. The fact that we have people come in who have struggled in high school and are now getting A’s in college is very significant and makes me really proud,” enthused Kennedy.

She notes, as well, that moving was a big accomplishment this past year.

“I think we’re working to make sure that this is an inspirational space that is worthy of our students. We’re still working on that, but our idea is that this space shows that we value the students’ efforts they’re putting into their lives-that this space matches their ability and potential,” continued Kennedy.

For Kennedy, one of the main goals moving forward is making sure that PELC is relevant for all adults in Prince Edward County and that there is a wide-range of programs to suit everybody.

With an informative AGM that boasted inclusivity and maintained a welcoming tone throughout, it would seem PELC is already well on their way toward that goal.