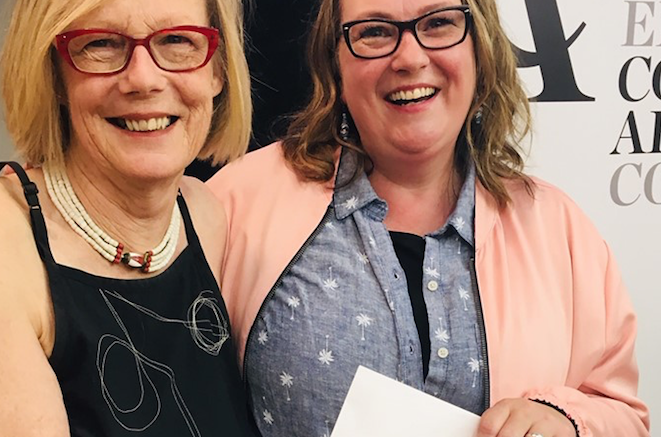 Art in the County (AITC) has been a staple in Prince Edward County since the inaugural event in 1993.

Without a doubt, AITC has evolved  since it’s inception, having gained notoriety and now being considered Eastern Ontario’s premier juried art exhibition.

As always, the exhibit is reserved solely for artists who are “residents and ratepayers” in the County and also members of the Prince Edward County Arts Council.

This year, the exhibit will run between June 21-July 7 in The Mess Hall, a multipurpose event space in the newly repurposed Armoury in downtown Picton.

Among the many awards to be given out at this year’s AITC is the second annual Community Arts Builder Award. This award is sponsored by Sam Simone, Monica Klingenberg and Laurie Gruer of Chestnut Park Real Estate.

The Community Arts Builder Award celebrates an individual who has enriched community life through the arts. Residents are invited to nominate candidates and the selection committee is composed of Shirley Lewchuk, Laurie Gruer and Sarah Moran.

“It is impossible not to be aware of Krista Dalby if you have any form of interest in the arts community of Prince Edward County. She seem to be everywhere. Art in the County and the PEC Arts Council are indeed proud to be able to present Krista with this aware,” stated the selection committee in the AITC’s June 21st press release.

Dalby could be considered an artistic “jack of all trades” being a playwright, director, visual artist, puppeteer and producer of theatre and public festivals. Among her many titles is Artistic Director of The Department of Illumination, a group of artists that formed in 2013 with the mission to create immersive art experiences available to everyone.

Since moving here in 2010, Dalby has made waves in the Prince Edward County arts scene, having initiated and organized a variety of arts events that run year-round, simultaneously weaving together a close-knit community of artists.

Among such events are the well-known Firelight Lantern Festival, ICE BOX, the Scarecrow Festival, Adventure PEC and Silobration.

As well, Dalby is one of the organizers behind Creative Rural Minds, a quarterly meet-up for those artists, makers, and entrepreneurs who want make a creative rural economy a lived and shared experience.

Following the opening night of AITC, Dalby took some time to speak with the Gazette about AITC and the importance of art for individuals and community alike.

Having been an artist from a young age, Dalby explains what she describes as art as a tool for bringing people together.

In speaking with the Gazette, Dalby also mentioned an upcoming festival called Boxtopia, a creative carboard kingdom for kids.

This will be the first time Boxtopia has graced County ground, having been hosted at the Skeleton Park Arts Festival in years past. The event will take place in Benson Park as part of the Canada Day celebrations.

Though there are “more artists here than ever before,” Dalby stressed the notion that “We are better when we work together. Rising tides float all boats.”

If art transcends the individual, then it makes sense that community building is about working together rather than competing against one another. Along with the aforementioned festivals, Dalby is hopeful that she can spread that ethos from one end of the County to the other.