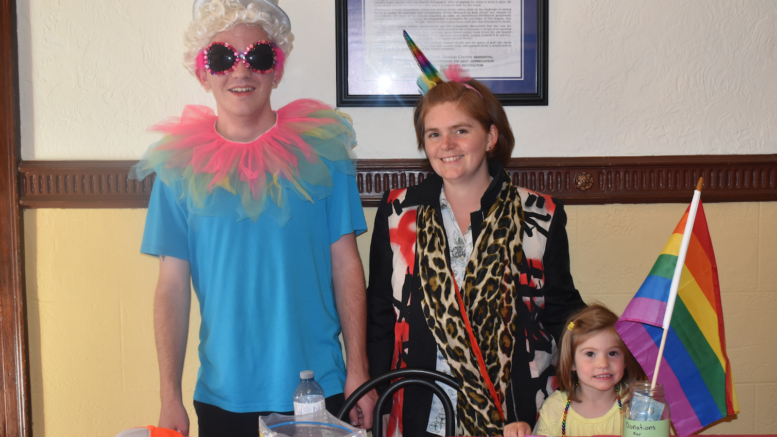 CELEBRATING IN STYLE - (L-R) Skylar Gray, co-organizer of the new LGBTQ youth drop-in space, along with Joanna Howard of the Picton Public Library and her daughter, Claire. (Sarah Williams/Gazette Staff)

The movie was preceded by an Elton John Extravaganza, which took place in the lobby of the historic theatre.

People were encouraged to attend the event with the advice to “be your most fabulous self”.

Many who attended were dressed with the characteristic freedom of expression that Elton John so flagrantly espoused.

Feathers and fabric of all colours of the rainbow adorned revellers who mingled before what was described as an “eye-popping and powerful” movie. Clothing racks adorned with an eclectic array of garments were available for guests to wear with a small donation.

All proceeds from the movie and otherwise were to be donated to the new LGBTQ2+ drop-in space at the Picton Public Library.

Set up at a booth near the front door, collecting donations and doling out information, was Skylar Gray, co-organizer of the new youth drop-in space, who took a moment to speak with the Gazette about this important initiative.

“The LGBTQ2+ drop-in space stems from a survey done by the Greater Than County Youth Collective,” Gray explained, “This survey found that LGBTQ2+ youth were doing less well in emotional and mental wellness. One thing the youth really wanted was a safe space. We started this through some funding. We’ve been trying to get the ball rolling for a very long time,” noted Gray.

“We just got the grant to start the youth drop-in space this week,” he added.

According to Gray, the drop-in space will run every Thursday afternoon from 3 p.m.-5 p.m. They will be hosting trips, crafts, projects and clothing swaps, among other things.

Cecilia Jost, organizer of the Elton John Extravaganza, also spoke to the Gazette about her motivation for hosting this event.

“I love Prince Edward County from the peace found in nature to the fascinating events and, especially, the warm sense of community here. I’ve been encouraged to become an activist and artist here,” Jost says.

The event was a huge success, drawing in a large crowd of people to attend the movie.

“The Regent Theatre box office concessions were one of the highest of the year for a movie,” exclaims Jost, adding, “I was touched that the LGBTQ2+ table received generous direct donations as well as participation in the form of written messages of love for the upcoming LGBTQ2+ youth drop-in space,” added Jost.

Having conceived of the idea in November, Bob Cooke, general manager at the Regent was immediately enthusiastic and welcoming.

Jost notes she is hopeful that the success of this event will only be the first of many similar events to support such a wonderful cause.

And aside from that, Jost notes, “I love The Regent Theatre and it’s the perfect venue.”

In the spirit of acceptance, the Elton John Extravaganza was a success, having brought community members together to show their enthusiasm for the freedom to love, to dress, and to simply be.