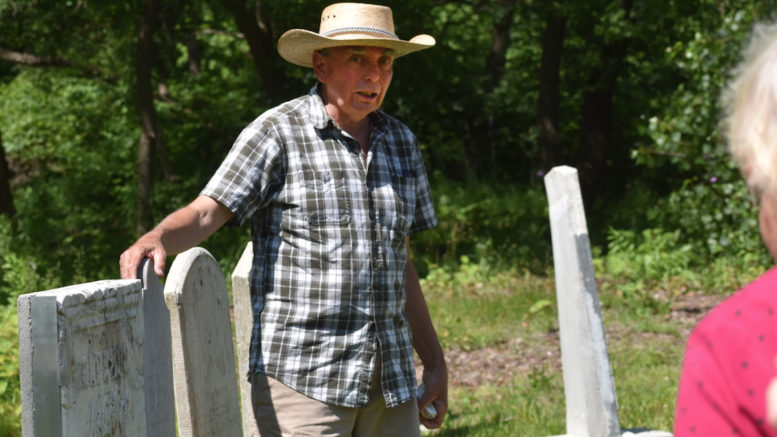 Sunday was a quintessential summer day in Glenwood Cemetery. The trees had formed a leafy canopy above the old stone chapel as birdsong mingled with the sound of classical music played by local musician Sam Hirst.

Many community members, awaiting the guided walking tours being held that afternoon, mingled amongst the yellow begonias and ferns while sipping lemonade.

But this bucolic scene is far different than that which played out in the cemetery a year ago. On June 20, 2018, Glenwood Cemetery was host to two unwelcome young vandals who managed to topple and damage over 150 tombstones.

On this day, Glenwood would be offering two guided walking tours. These tours were organized as an effort not just to reflect on the damage done by vandals last year, but more importantly, to reflect on the progress that has been made in repairing the damaged stones.

“This was one of the biggest acts against the Criminal Code in the past year,” said Prince Edward County OPP detachment commander Staff Sergeant John Hatch, “The wheels of justice do turn slowly,” he added, noting that the youths next court date would be in July.

At least, in Prince Edward County, the arc of moral history does seem to bend towards justice, with the public being exceedingly helpful by providing tips about this case.

The public involvement did not end there. As the cemetery is a non-profit organization, the repair of stones must come from donations.

One particularly remarkable donation, said Glenwood Cemetery Board Chairman Sandy Latchford, was one family who adopted and paid for an orphaned stone to be repaired.

Before the walking tours commenced, Latchford took a moment to speak with the Gazette about the scope of the repairs and how the process has gone so far.

They stones must also be inspected individually with a personalized repair plan made for each one.

“We started with the smaller monuments which were less complicated as well as the pioneer ones,” noted Latchford, “We are working our way up to the larger stones. We’ve completed 40 small grave markers and about 30 of the mid-sized ones,” she said.

“Of the over 150 stones that were damaged, we’ve only found one that is not repairable,” added Latchford. STILL STANDING – In the area where the majority of tombstones were toppled, only a few such as this marble example escaped the vandals’ wrath. (Sarah Williams/Gazette Staff)

Before heading into the chapel to speak with guests, Latchford spoke briefly about the impetus behind the guided walking tours.

“We wanted to make sure the public knows we are undertaking the restoration. We have over 70 stones repaired already, which is considerable given the time period and weather that we’ve had to work with,” commented Latchford.

A wet and rainy spring have significantly delayed  repair and restoration efforts.

“The money that has been donated is going directly to the progress of repairing the damaged stones,” she said, “We’re hoping that this event will help to keep people enthusiastic about helping out,” added Latchford.

The cemetery board is hopeful that the repairs will be completed in the next three years.

Attending the event on Sunday was Mayor Steve Ferguson who spoke to the crowd that had gathered in the chapel.

Ferguson applauded the terrific repair work by both the cemetery and Campbell Monuments to tend to “this horrid act of vandalism.”

Guests were invited to join either Terry Sprague, a field naturalist, or Gary Foster, past president of Campbell Monuments, on a guided walking tour.

With background in archaeology, Foster walked guests through a perspective of Glenwood that reflects times past, both here and around the world.

“When cemeteries such as Glenwood were built, there wasn’t the kind of taxation there is today, so graveyards often became more park-like in their setting,” Foster explained.

Interestingly, Foster noted the man who designed Central park also designed several other local cemeteries, one in Kingston and another in Belleville.

Whether or not this person designed Glenwood, the architect of the cemetery certainly inspired the concept of having it look as natural as possible, noted Foster.

“Stones reflect what happened in the past,” effused Foster, citing the cholera epidemic in the 1850s, which is reflected in a memorial in Glenwood.

“Monuments can also give you a better understanding of the economics of the time,” he added.

Like many things, economics are tied to politics. Prior to the American Civil War, Foster explained, many stones were made of marble that was transported from the state of  Vermont.

“The first commercial monuments were white marble but around the 1860s they disappear,” said Foster.

After the American Civil War, the trade tariffs imposed on Canada due to the British Empire having sided with the south prohibited this material from being used for tombstones.

When marble became difficult to source for grave markers, many local families began using limestone for their monuments. This is also reflected in Glenwood. THE CELTIC CROSS – Chris Tudor, centre, shows the only tombstone at Glenwood deemed to be not repairable. Cost of replacing this monument would be $11,000. (Sarah Williams/Gazette Staff)

“Through the stones you can see an influx of wealth during the Barley Days and the Canning Era. People in the County had more money than most in rural Southern Ontario areas at that time,” noted Foster.

As the tour wound its way through Glenwood’s walking trails, the unfortunate sight of still toppled tombstones could be seen.

In a particular portion of the cemetery, so many stones have been knocked over it looked as though an earthquake or nuclear war had caused such destruction.

Just as the cemetery was built with the hard work of human hands, so too was it vandalized.

But in a timeline measured in minutes, not decades or centuries.

Chris Tudor of Campbell Monuments poignantly noted, “What took the thieves minutes to tear down will take us hours, or years, to fix.”

Donations are still being accepted to help with the cost of repairs, and many tombstones have already been restored.

Already it’s clear, upon reflection, people will not just see a horrific act of vandalism but a community that cared enough to prop each other up, in life and in death.

For more information regarding restoration efforts, please contact Glenwood Cemetery at 613-476-3511 or at info@glenwoodcemetery.ca.