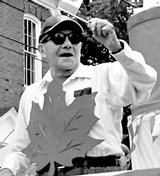 Arthur Allan  Sinclair
April 30, 1946 – June 23, 2019 Passed away at the PEC Memorial Hospital, Picton on Sunday, June 23rd, 2019. Art is survived by his wife Betsy of Wellington, sister Mary Sinclair of Picton and son David Sinclair of London. Arthur was born in Toronto, but lived and worked in Mississauga. He was initially employed by White Electronics but later moved to Panasonic Canada. He travelled extensively in Canada, the US and Japan on business. He married Betsy on October 12, 1974. As president, he was very active in the Mississauga Amateur Radio Club. After moving to Wellington, he joined the Quinte Amateur Radio Club, becoming president, and Wellington Rotary, becoming president from 2011-2012. The family would like to thank Dr. Wattam and the doctors and nurses of the Picton hospital for the care they gave Art. As per Art’s wishes cremation has taken place. Friends may visit with the family at the Ainsworth Funeral Home, 288 Noxon Avenue, Wellington on Wednesday, July 3rd from 1-3 p.m. A Memorial Service will be held at the funeral home on Thursday, July 4th at 1:30 p.m. Memorial Donations to the Rotary Club of Wellington would be appreciated by the family. Online donations and condolences at www.ainsworthfuneralhome.com