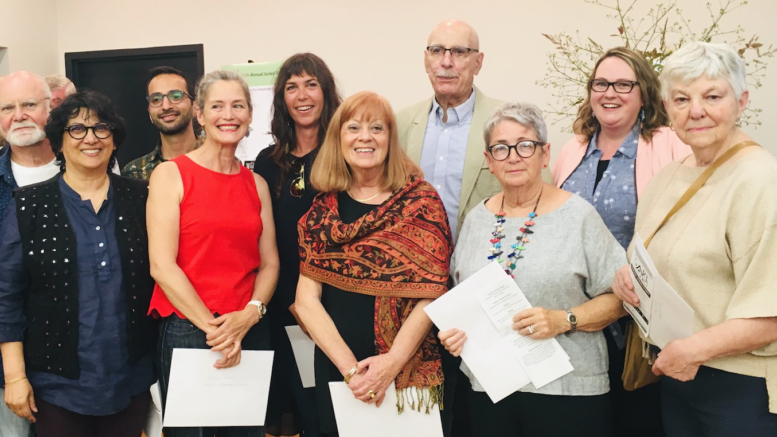 Friday marked the beginning of the 26th annual Art in the County. The event runs until July 7th and, this year, will be held at The Mess Hall, a newly renovated space in The Armoury.

Prince Edward County Arts Council is a non-profit as is Art in the County. All the money raised is funnelled back into costs associated with hosting the exhibition each year.

This juried show and sale has grown considerably since it’s inception back in 1993. AITC is now considered to be the premiere juried art exhibition in Eastern Ontario.

According to their press release, “Qualifying artists were invited to enter up to two original works of art in any media created since the previous year’s exhibition.”

For anyone having suspected that the art scene may be growing in Prince Edward County, AITC is proof. With a record number of entrants, 120 artists in total, the exhibition received  217 works of art altogether.

Of the 217 works that were submitted, 107 works by 75 Prince Edward County artists were selected for the show. These artists worked in a wide range of media.

The opening reception of this show was held on June 20th, which is also when the artists’ awards were announced. The opening night was sponsored by Mathers Law and Sage Design and Construction. Libations were provided by Broken Stone Winery as well as The County Cider Company. Food was provided by the Bloomfield Public House.

As per usual, there were several awards announced on the opening night. The Juror’s Choice Award, which is probably most familiar to the public, was awarded to five artists. These artists are: Mehdi Agahi for “Quiet Warrior”, Pat Busscher for “Vista”, Marion Casson for “Throw-County Sunrise”, Claudia McCabe for “Dreamt” and Shani Mootoo for “So It Is”.

Notably, this year’s AITC ushered in a new award, called the Maison Depoivre Award. This was awarded to Dianne Kehoe for her piece titled “Wake Up!” 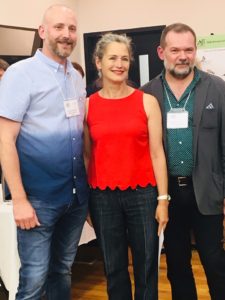 RISK TAKER (Centre) Diane Kehoe was presented with the Maison Depoivre Award for a piece that demonstrates risk-taking and originality by (Left) Vincent Depoivre and (right) Christophe Doussot. (Art in the County photo)

According to AITC, “The Maison Depoivre Award recognizes a work that demonstrates risk-taking and originality, technical skill and is thought provoking. The award recipient will be invited to exhibit their work at Maison Depoivre Gallery for the remainder of the 2019 season.”

Honourable Mentions were awarded to: Jennifer Topaz Bruce for “Time Matters”, Graham Davies for “As Time Goes By”, Dayna Law for “Slip Slidin’ Away”, Laura Morris for “Prickly Walk” and Sam Serrano for “Primary”.

Krista Dalby was also recognized for her efforts in the art community, with the 2nd annual Community Arts Builder Award. Sponsored by Sam Simone, Monica Klingenberg and Laurie Gruer of Chestnut Park Real Estate Ltd., this award is given to those individuals who have enriched community life through the arts.

For more information about any of these awards, or Art in the County in general, please visit www.artinthecounty.com, call the Prince Edward County Arts Council at 613-476-8767 or email them at: artinthecounty@countyarts.ca