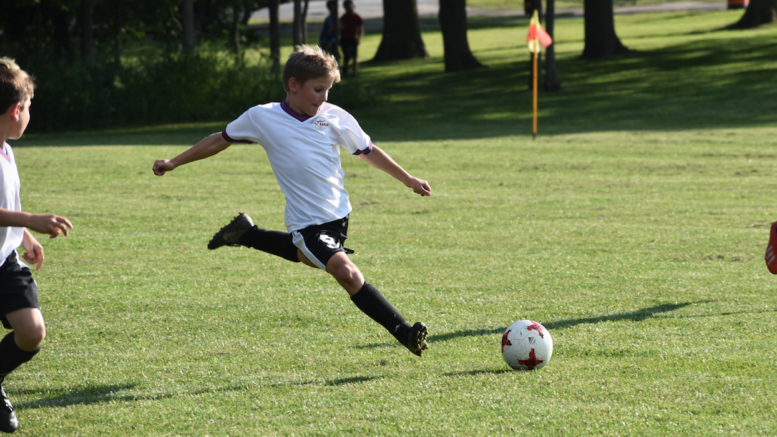 GETTING ALL OF IT- Neil Thompson Services PECSA U10 Eagles Striker Jake Goad shows fine form during his club’s 3-2 setback at the hands of Kingston-based club Pegasus. (Jason Parks/Gazette staff)

Local U10 squad showing promise as 2019 SOSA season ramps up

It took a late goal to send them down in defeat Tuesday night but there’s no question the Prince Edward County Soccer Association U10 Neil Thompson Services Eagles are a team on the rise.

The Eagles hosted top ranked Pegasus of Kingston at the Johnson St. Soccer pitch on Tuesday night and got off to a hot start when fullback Lane Kempers booted a top corner blast to stake the Eagles to a 1-0 lead.

In taking on the Pegasus organization, the Eagles were battling one of the top soccer development organizations in eastern Ontario.

Keeper Ross Martin was busy throughout the match and kept the Eagles in the contest but a pair of well-placed strikes put the visitors from the Limestone City ahead 2-1 into the second half. Midway through the second stanza, Aaron vanHaarlem was fouled in the area and the Eagles were afforded a penalty kick. Striker Jake Goad converted for the PECSA side to make it a 2-2 score with about 10 minutes left in the game.

Unfortunately for the Eagles, a late strike that snuck past Martin was the winning margin as the club fell to 2-3 on the Southeastern Ontario Soccer Association regular season.

“I thought we matched up with them very well Tuesday night but I know we gave up on some 50/50 challenges for whatever reason,” Wolcott told the Gazette. “I think we were right there with them but we have quite a few things to learn and competitive edge might be one of them.”

The coach praised the efforts of Martin who was under siege a number of times and kept his club in the game.

A core that was together last season and competed at the U9 level, Wolcott explained the team has about one third of 2010 births joining the balance who were born in 2009.

“We’ve got some outstanding athletes and this mix is about developing for future years when the number of players on the field expand,” Wolcott added.

In order to keep the players focused and developing, the coaching staff is moving players around and putting them in different positions on the field as to help expand their minds to the game of soccer and considering how plays can develop through positioning.

“We’ve got such great depth on this team and I think that’s a great sign for such a small organization like PECSA,” Wolcott said. “We’ve been able to hold our own against the larger centres and we want to keep developing players for the future seasons when the field and the number of players on it expand to nine and 11.”

This past weekend, the Eagles had a nice showing at the Kingston United Soccer Club First Capital Festival, going 2-1-1 in four games.

“We were really proud of the players and how they performed. For some of the 2010’s, it was their first rep soccer festival,” Wolcott said. “Even in our three loses in the regular season, the games have been incredibly close.”

Tuesday’s action at home was the last game in Picton for the Eagles until August.

The club is slated to head to Kingston every Tuesday night through the month of July to take on teams from the Kingston Clippers and Kingston United organizations.

Their next home game is Tues. Aug. 6 when they host Belleville.