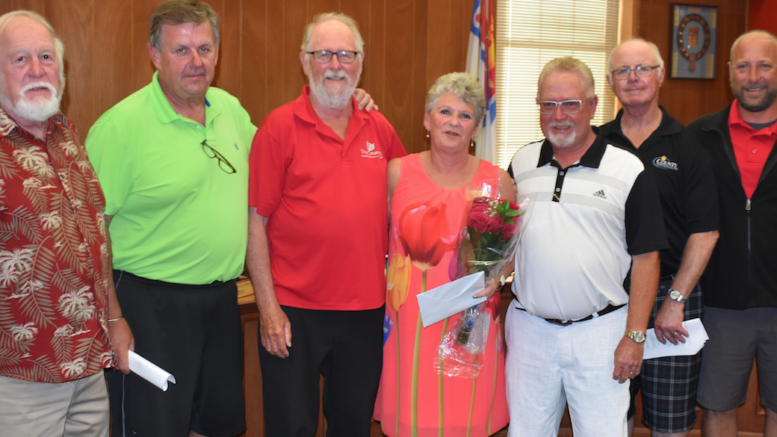 The County of Prince Edward is saying goodbye to a long term employee that predated amalgamation.

White became clerk of the County of Prince Edward in 2013 after serving 15 years as deputy clerk. She began her municipal career in 1989 with the Village of Bloomfield as the assistant to the clerk before becoming the clerk/treasurer/collector in 1992.

A number of past councillors, calling themselves the “Council Castaways”, made a group deputation at Shire Hall on Tuesday evening.

Led by Kevin Gale and past County of Prince Edward Mayor Robert Quaiff, the group which included Barry Turpin, Steve Graham, Jim Dunlop, Bev Campbell and Gord Fox thanked White for her tireless efforts and dedication to municipal operations and ensuring Council didn’t make a misstep during their deliberations and dealings.

Gale figured between the members at the podium Tuesday night there was 73 years of combined municipal service and the former Sophiasburgh councillor said the group decided amongst themselves a long time ago they were not going to miss White’s last meeting without first expressing their thanks.

“Over the years we (councillors) were privileged to serve under the guidance and sometimes supervision of Kim’s strong municipal experience. After long days in the office, she persevered through meetings often several hours log keeping things and council members on track,” Gale said. “Thank you from all of us and from other past members of council who are here with us tonight. You will be missed by the municipality.”

Former Mayor Quaiff said White had the patience of Job in dealing with council and members of the public in a manner that was always professional and diligent.

“From the bottom of my heart, I wanted to say ‘thank you’. What an ambassador you have been, what a professional clerk you have been. You saved my bacon more times than enough. You have the patience of Job. I wish you nothing but happiness,” Quaiff said.

In White’s absence, the municipality announced Catalina Blumenberg has joined the County of Prince Edward as the new Municipal Clerk.

“Catalina’s experience, education, and enthusiasm for local government make her uniquely qualified for this position,” says Steve Ferguson, Mayor, County of Prince Edward. “While we are excited to welcome Catalina to The County, we are sad to say goodbye to Kim. All of us here at the municipality appreciate Kim’s many contributions. Her professionalism, expertise, positive attitude, and willingness to have fun will be truly missed by Council, her colleagues, and the public. We wish Kim and her husband Fred all of the best in retirement.”

Blumenberg served as deputy clerk at the Township of Uxbridge in Durham Region from 2017- 2019. From 2014-2016, she served as committee clerk at the City of Kingston.

Blumenberg began her career in local government as an intern with the Town of Carleton Place in 2013.