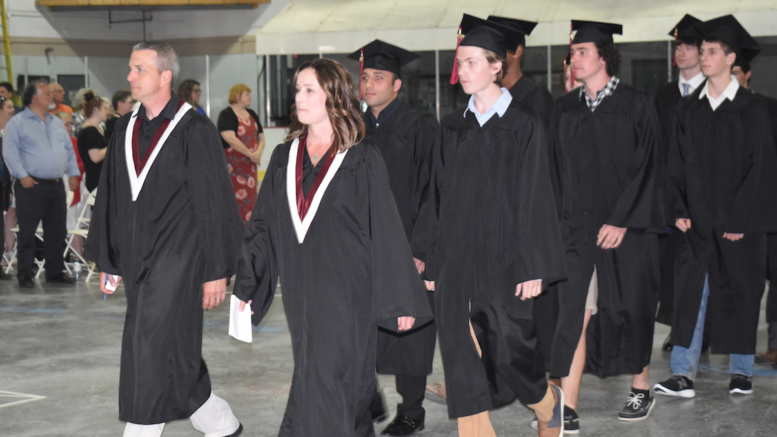 THE PROCESSIONAL- PECI Staff members Andrew Holmes and Heather Monroe lead the graduating class of 2019 to their floor of the Prince Edward Community Centre on Thursday evening. (Sarah William/Gazette Staff)

The sun had begun to set on the fields just visible through the arena’s doorway when PECI’s 2019 graduating class took to their seats.

Though the sun was also setting on their high school career, the excitement and promise of the students was palpable.

The stage festooned with flowers was host to several impassioned speakers. One such speaker was school board trustee, Jennifer Cobb, who spoke on behalf of the Director of Education, the chair of the school board, and all the trustees of the Hastings and Prince Edward District School Board.

“Graduation is not the be all and end all we make it,” Cobb said to a captivated, and perhaps questioning, crowd.

“Graduates,” she implored, “What do you dream of? Whether it’s staying here in the County to be an agriculturalist, a craft brew maker, a trades person, or whether you dream of travel, college, university or the world of work-I hope we’ve given you the inspiration and excitement to go and get those things. Dreams take hard work, and you’ve shown us that you can work hard enough to make it here, to graduation,” Cobb continued.

With a speech that focused on the collective effort that it takes for students to graduate, Cobb went on to thank the parents, guardians, family and friends, as well as teachers, support staff, and administration at PECI that guided the graduating class throughout their educational careers.

Tina Elliot, Superintendent of Curriculum Studies at HPEDSB, also spoke on behalf of the school board.

“In addition to celebrating you, I’m also very appreciative of all the people who have helped you to be successful in your learning journey,” Elliot stated.

“The PECI school team is an amazing team. They know each and every one of you not as students but as young adults with so many assets,” Elliott continued, adding that she could not wait to hear about the exciting opportunities that lie ahead for the students.

In the same vain as Jennifer Cobb, school board Trustee, Elliott ended her speech by extolling the virtues of a supportive community, be that family, friends or other community members.

“It takes a whole village, a whole community, and there’s no place like Prince Edward County that can exemplify what community means, and so your families are an integral part of that.”

Earle Wright, who took on the role of PECI Principal in January, has led the school through a time of great change, wherein PECI became a Grades K-12 school.

After commending the students and staff of PECI, Wright also reflected on the strong sense of community both in PECI and the County at large. 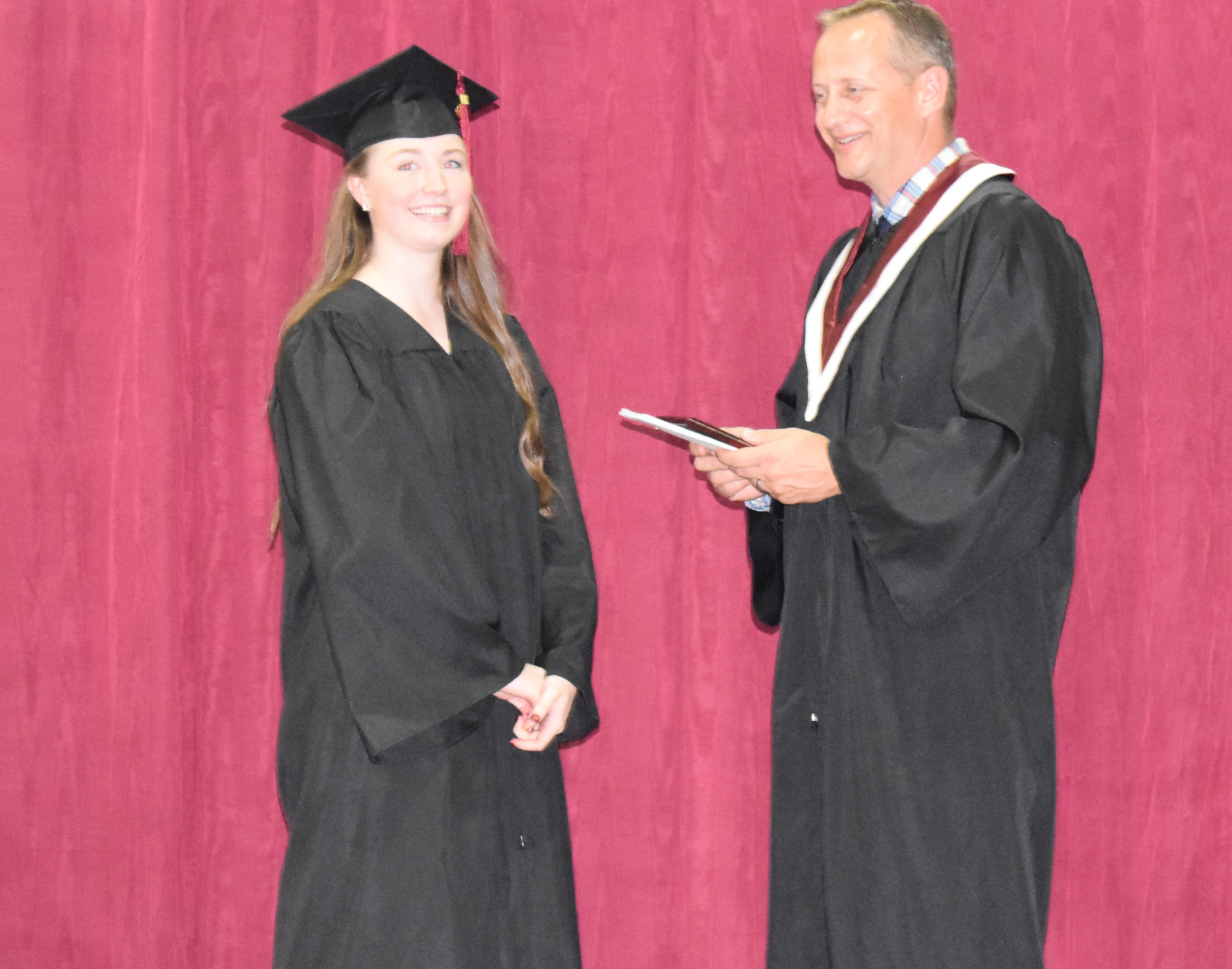 “As someone who is new to this school, one thing that has stood out to me from day one is the strong sense of community that exists at PECI. There is a true sense of family here and like all families, we celebrate when good things happen. We have some differences once in a while, but when it really matters this community is here for one another.

The graduating class had nearly $20,000 worth of awards, scholarships and bursaries donated by community partners.

As Wright noted, many of these community partners also put in volunteer hours to support extracurricular activities such as field trips, sports teams and the arts. Some helped build playground equipment when those who are now graduating were young.

“The collective effort of this community have ensured our students have the support, knowledge, and skills they need to be successful as they transition from secondary school to the workplace, an apprenticeship, college or university,” Wright concluded.

Of note, Principal Wright advised the graduating class to take full advantage of the opportunities ahead of them, being unafraid to fail.

“Do not be afraid to fail: some of your best learning will come from trying something that maybe doesn’t go the way you wanted it to the first time,” said Wright.

Far from failure, student success was  recognized with awards, such as the Governor General’s Award for highest academic standing, won by Amanda Johnson. Johnson also won The George Elson Memorial Award for best all-around student along with 13 other awards.

Jennifer Lyons, a teacher at PECI, introduced valedictorian Reynolds, who would be speaking on behalf of the graduating class of 2019.

“Moments are what make up your life, but the category of moments can vary. Monumental rites of passage like tonight, your high school graduation, or passing your driving test; these are the moments you will remember for a long time,” said Lyons, adding, “ Other moments can be smaller and rather incidental, but still be very memorable; like dropping your phone and breaking the screen.”

Lyons encouraged students to be kind and make each moment matter by acting with kindness. Shining a light on the value of small but memorable moments, Lyons recounted a number of instances told to her by graduating students that helped inform their perception of Bruce Reynolds and illustrated why he was chosen as valedictorian.

Last but not least, Bruce Reynolds addressed the crowd to immeasurable applause and cheers.

After thanking his parents for supporting him, the valedictorian joked about some of the lessons the graduating class had learned during their high school career. 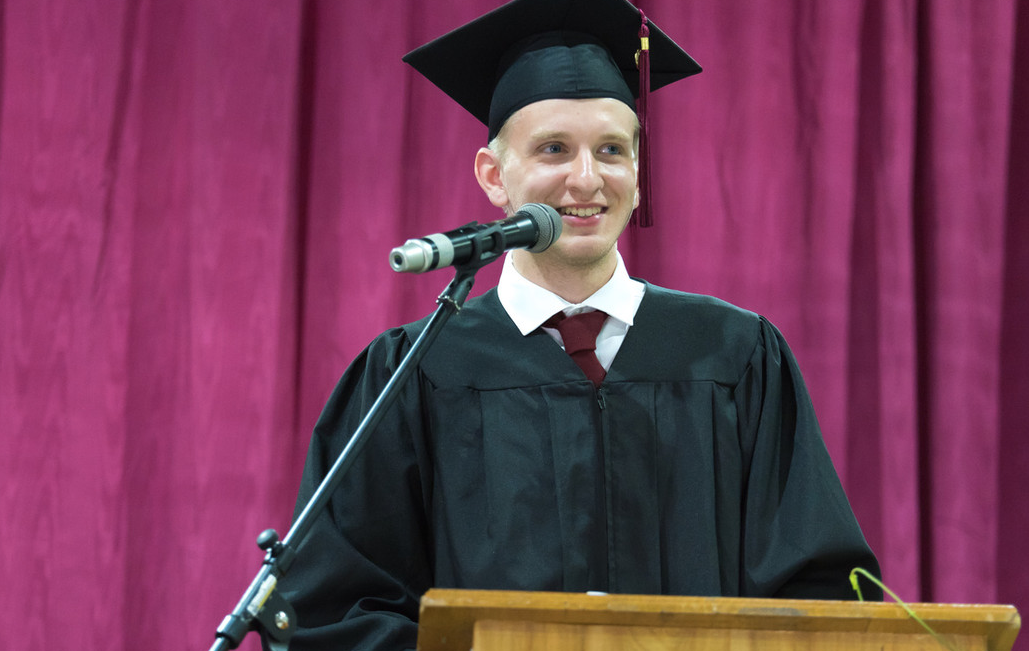 “I think that the most important thing that we have learned over the last four years is to have a positive attitude and how to turn problems into opportunities,” added Reynolds.

Recounting a story about an unfortunate incident where a donkey was trapped down a well and his owner seemingly had no choice but to bury the burro.

However, as the owner poured dirt into the abandoned well, the donkey kept repositioning itself and was eventually able to crawl out on its own power. Reynolds used the story to highlight the need to persevere through difficulties that life can present.

“In grade nine, I was diagnosed with dyslexia,” Reynolds recounts. “When I was diagnosed, I thought it was the end of the world. I thought that I wasn’t smart enough for school, I didn’t belong anywhere because I was different, and I was terrified that I would get bullied for “not being able to read,” he recalled.

“As time passed, the techniques that were taught to me began to become easier and I mastered them. That was when I made the decision that I was good enough and that I would be able to make it in the world,” added Reynolds.

Speaking of the varied trials and tribulations that many students faced during their high school careers, Reynolds implored his fellow graduates to draw on their personal strengths to overcome what difficulties may yet face them.

“Use what you have learned here at PECI and throughout the County to seek opportunities when you are faced with adversity. Go out into the world and bring happiness and joy to yourself and everyone around you,” he said, emphatically.

“Be like the donkey,” Reynolds concluded, “And use what is trying to bury you, to instead bring you up to a new life.”