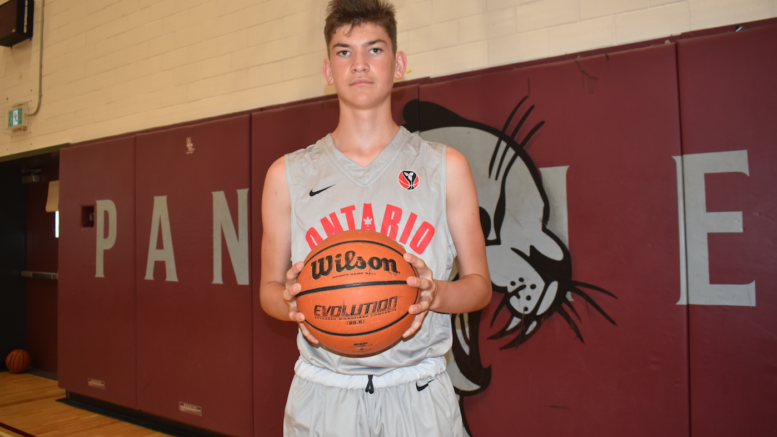 The first locally produced basketball player since Canadian University superstar Matt Ross to suit up for an Ontario Basketball Association summer team in the OBA’s High Performance has his sights set on lofty goals and becoming the next big thing in local roundball.

And big might be understating Hayden Blakely at this point of his budding basketball career.

The lanky CML Snider product is already well over 6’ tall and, despite coming off just his second season of competitive basketball in the County Clippers program, Blakely has been identified as an up-and-coming player on the Ontario stage. Blakely and his U13 Team Ontario club played up a division in the U14 Elite ranks at the 80 team Saint Laurent Summer International Tournament in Montreal, QC this weekend.

Clippers U14 coach Barb Inrig-Peters has coached and worked with Blakely over the last 18 months at summer camps as well as coaching the young man during the 2018-19 season.

“We are so proud of his progression and how he’s been able to build his game. We did some summer stuff with him last year and he just keeps getting better every day,” Inrig-Peters told the Gazette on Tuesday at PECI.

The Clippers organization is hosting a summer basketball skills camp at the local secondary school this week where Clippers players like Blakely are helping guide about 45 future and current County basketball players from Grades 1-8.

Inrig-Peters and fellow U14 coach Christian Dickinson are heading up the summer camp where skills, games and fun are combining to give the players an exciting and active first week of summer vacation.

It was a summer workout where Inrig-Peters and others started to see signs this rep hockey player who turned in skates for basketball shoes might have made the right choice for his sporting future.

The coach explained Blakely was spotted during one of the Clipper’s first weekend tournaments in Toronto during the 2018-19 season.

“For a player from a small centre like Prince Edward County to be scouted by the OBA is really special and unique,” She added.

While Blakely’s skills such as passing, shooting and ball handling have taken off, Inrig-Peters said the U14 staff tried to hone different aspects of the player’s game this season. 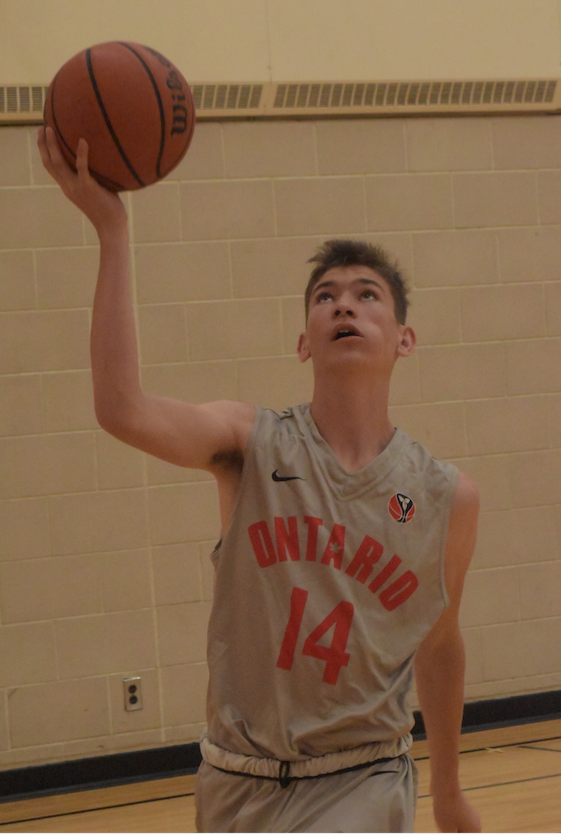 EYES ON THE PRIZE- Hayden Blakely works out at PECI on Tuesday. (Jason Parks/Gazette Staff)

“Obviously he has the height over other players and he is so skilled but we challenged Hayden him step up in a leadership role and be an awesome teammate,” Inrig-Peters said. “By the end of the season he was helping players and coaching them position wise on the court as well as being vocal and supportive when he was in foul trouble and on the bench. That’s where we saw this improvement and really that translates into basketball skills but also life skills that you can take with you anywhere.”

Blakely told the Gazette he hasn’t regretted changing sports from hockey to basketball and enjoys the quick flow and accuracy the game requires.

Blakely swapped out between the small forward and power forward position for Team Ontario this weekend who went 1-2 playing up a division. The majority of the squad is made up of players from the Toronto and London area.

“The OBA coaches liked my driving and finishing but I still need work on my agility and strength and although I’m tall, I don’t quite have the strength to guard the big men yet so that’s something I’m dedicating myself to this off season,” Blakely added.

It’s a been a whirlwind for player who’s entering Grade 8 at CML this fall and won’t turn 14 until early January.

“It’s crazy to think how fast this has all happened and how I’ve come so far in such a short period of time. The Team Ontario experience has been amazing and I want to see how far I can go,” he said.

Players like Blakely tend to utilize the Clippers organization as a stepping stone and one only needs to look to local standouts Brodie Byford and Alex Arsenault who plied their secondary school basketball trade for PECI but suited up in the OBA for Kingston and Belleville, respectively.

No matter where the game leads Blakely, he’s greatful for the first key steps the Clippers organization have facilitated in his growth as a basketball player. “I’ve had some great coaches that have gotten this far. (Former PECI standout) Andrew Wentworth, Barb and Christian, they really helped me and built my game from the ground up as a shorter, unathletic kid. My ball handling was not that great but they’ve really worked with me and helped me to get better,” said Blakely.

Clippers President Rob Garden said anytime a member of the youth basketball organization ends up on the radar of the OBA High Performance program it was an occasion to celebrate.

“Hayden’s a great kid and really loves the game of basketball,” Garden told the Gazette. “The organization is incredibly proud of him and happy with the development opportunities that have flowed from having Coaches Inrig Peters and Dickinson as well as some key instruction from alumnus Taylor Reddick last season who inspired the U13 players and told them it doesn’t matter where you are from, players are only limited by their will and desire.”