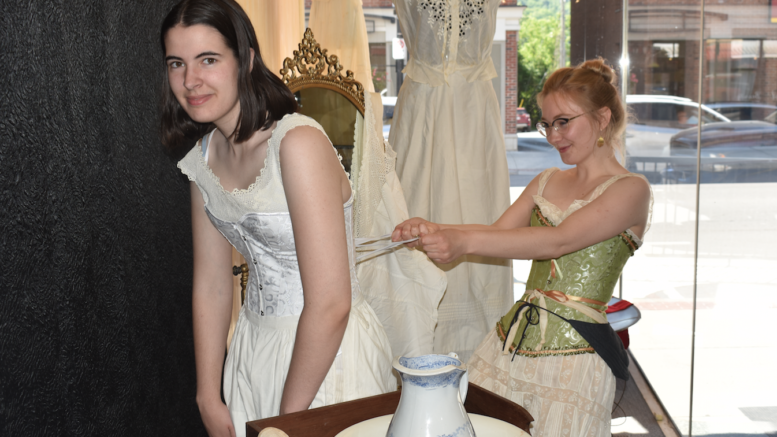 Vintage clothing took on a whole new meaning in the display case at City Revival on Friday morning as municipal museum employees Abbie Henderson and Kirstie Ross were down to their unmentionables.

But not to worry for those that think Picton might be transforming into a indecorous town- The underwear worn by the young ladies left plenty to the imagination and was closer to the garb worn in 1819 as opposed to 2019.

All this summer, the County of Prince Edward Museum’s female undergarment collection will be on display at Rose House Museum in an exhibition called ‘Victoria’s Secret’

“It’s authentic Victorian-era undergarments,” curator Dianne Denyes said. “In total, most women had four to five layers to put on before they would put on their wool dress.”

Camisoles, bloomers, bustles and corsets made for an arduous journey from out of bed to fully dressed for women of the mid-to-late 1800’s.

The patience of a safe cracker was needed to unwind the get ups when ladies would peel back the covers at 7 p.m. each evening.

Denyes explained most of the underwear was made of cotton although a rare silk example might be found.

As Henderson and Ross found, getting dressed and undressed wasn’t exactly a one-woman process.

“There’s so many buttons and laces that you really couldn’t do much on your own,” Denyes added “Most women either had a dresser or female children to help.”

The sizes were also slightly different back in those olden times. The rule of thumb for sizing was that a woman’s age dictated her expected waistline. For example, a 17-year-old female would have a 17 inch waist.

“They couldn’t really even breathe in these outfits,” Denyes said with a laugh. “Everybody was much shorter back then as well.”