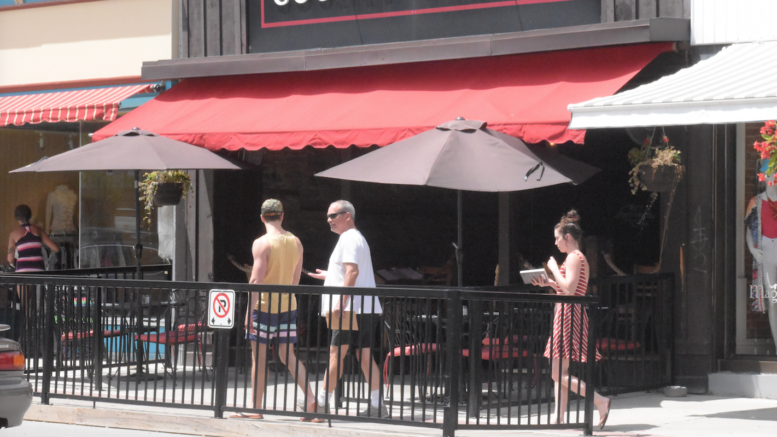 HAPPY TRAILS TO YOU- Pedestrians travel along the sidewalk in front of the County Canteen on Main St. on Monday afternoon. (Jason Parks/Gazette Staff)

Prince Edward County Council will be undertaking a review of allowing restaurants in Picton and Wellington to claim sidewalk space and create temporary patios along the Main St. streetscape in each town.

Councillor Phil Prinzen brought forward a motion that was approved at the June 27th Committee of the whole meeting asking for staff to create a report on the practice of allowing restaurants to create patio space on local sidewalks.

In 2013, the municipality implemented a Sidewalk Patio pilot program as a trial initiative for the summer months of that year.

According to the motion passed by the council of the day, the governmental body considered it desirable  to permit and regulate encroachments on municipally owned lands to ensure that the outdoor patios do not hinder pedestrian traffic and/or cause a hazard in any way.

Prinzen made it clear in bringing forward a motion that he was no fan of patios tying up parking spaces and making narrow streets and sidewalks even more of a challenge for motorists and pedestrians to navigate.

Prinzen called for a review of the bylaw and, if supported by council, repealing the measure to make the patios illegal and “get those parking spaces back.”

As part of the pilot program, the restaurants pay the municipality $10 per day billed monthly for the usage of adjacent parking spaces and require $2 million in liability insurance for which the County of Prince Edward is listed as an additional insured.

“If we can get enough support maybe cancelling the whole bylaw all together and making those sidewalk patios illegal in our villages,” Prinzen said, adding the bylaw in his view pitted those businesses with patios against those that don’t and would enjoy more parking space for customers.

Councillor Mike Harper said he spends a great deal of time in downtown Wellington and commented on the patio at The Stache on Main, stating the patio proves as a hazard to those who don’t fully understand how to use it.

“(Pedestrians)are walking out onto the street and it happens on a daily basis, some with their baby strollers. That for me is a concern and it’s a real hazard,” Harper said.

The councillor for Wellington added the business is adhering to the bylaw as it currently stands yet there still seems to be issue with how pedestrians are or aren’t navigating the bypass area properly.

“It’s laid out in the bylaw: The patios do not hinder pedestrian traffic and or cause a hazard in any way. So I would certainly be in favour of revisiting the bylaw,” Harper said.

Outgoing Director of Community Development and Strategic Initiatives Neil Carbone said it was important for council to note the patio program doesn’t necessarily involve taking up parking spaces and there are a number of patios on in downtown that are not required to bump out into parking spaces but are still a part of the pilot program.

Carbon was the catalyst behind the pilot project and agreed that it was time to examine and rectify some of the issues that have come up as a result of the program but added there were a number of positives for local businesses thanks to the initiative.

“I don’t think throwing the baby out with the bath water would be what staff would be recommending back to council,” Carbone added.

Councillor Phil St. Jean of  Picton commented he does support the program and said any staff report should include consultation from Business Improvement Associations in Picton, Wellington and Bloomfield as there are businesses that are directly impacted by the practice.

Councillor Ernie Margetson of Hillier said that as a member sitting on the accessibility committee, the group was aware of some issues that should be addressed going forward.

The councillor added he supported a review.

“I know they are suppose to meet the requirements for accessibility for Ontarians with disabilities act,” Margetson said. “We did hear from someone who had trouble with a rope guard as respect to their ability to navigate around a patio if they were visually impaired and that’s what brings it to my attention as far as a review might be required and whether it benefits to the greater community or warranted in this case.”

The staff report is expected to be generated and sent to the Committee of the whole later this summer.