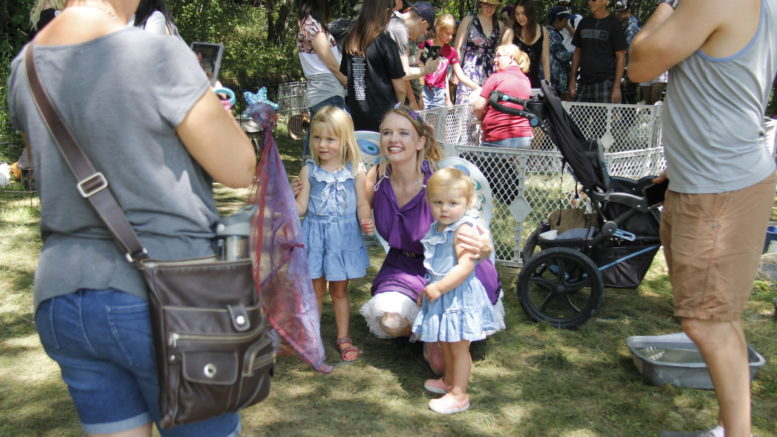 MATCHING MISSES Lavessa (Melissa Radford) the lavender fairy posed with sisters at Kristie's Portable petting zoo at the 8th annual PEC Lavender Festival on Closson Rd. This year's event is stretched to two weekends to give more people the opportunity to take in the sights and scents of the Festival. (Desirée Decoste/Gazette Staff)

Lavender lovers from all over Ontario have followed the scent again to the Prince Edward County Lavender Festival.

It’s been a busy first weekend at the Closson road property with close to 2,500 people in attendance.

Unlike years past, the 8th annual Lavender Fest is spread out over two weekends to give more people the opportunity to enjoy the lavender and other events within the festival.

“The infrastructure is already in place now and the flowers are beautiful for almost a month so why not?” Rolande Leblanc, co-owner/co-organizer told the Gazette of the decision to extend the event to a second weekend. ”It gives people the opportunity who have visitors or relatives who couldn’t make it the first weekend can now go to the second weekend.”

The event has always had a calming atmosphere with people being content just sitting and looking at the flowers as well as smiles on everyones faces while lining the rows of lavender to get a picture in the stunning fields. 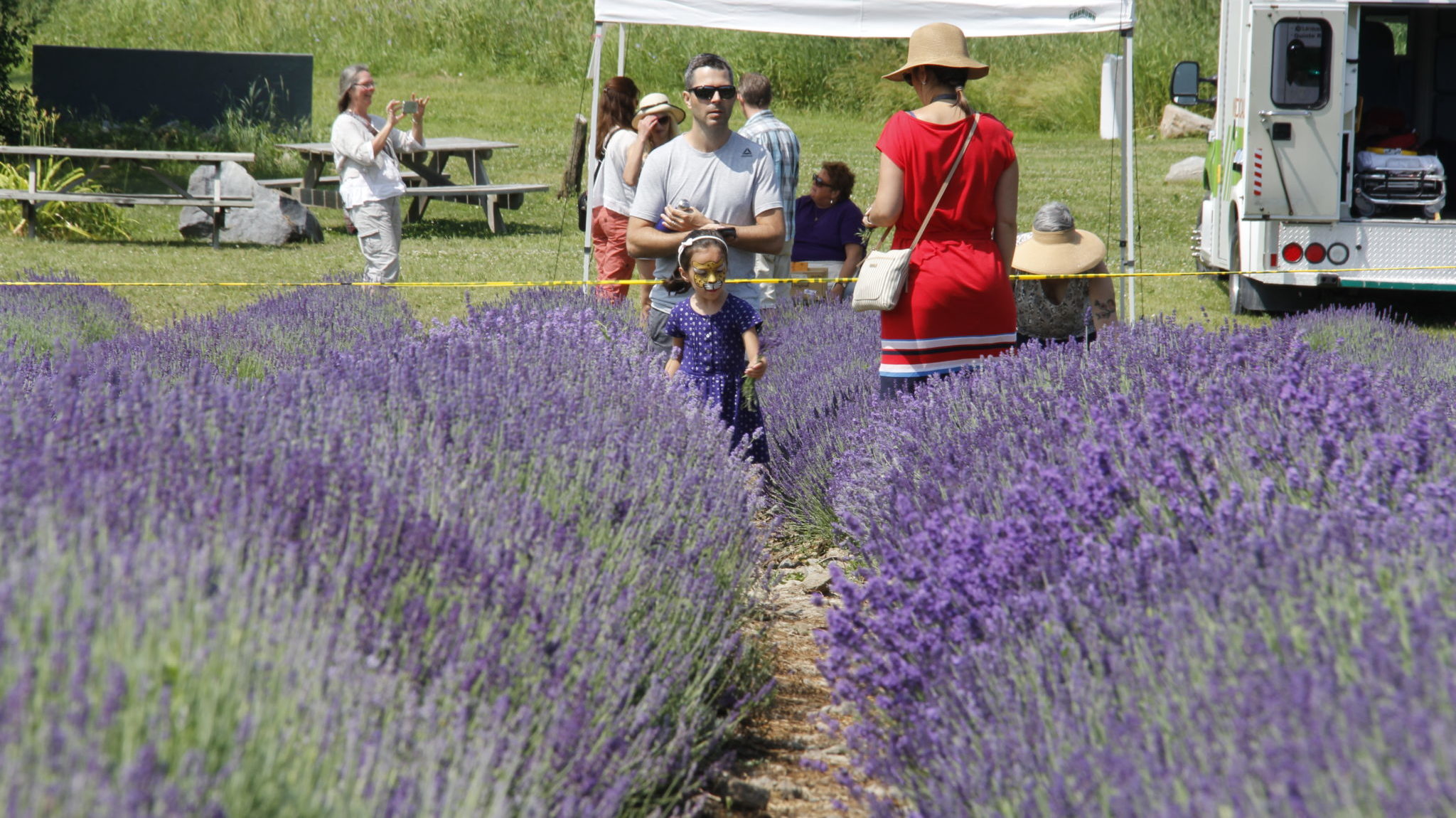 LOVING LAVENDER A family picks their own lavender bunches at the U-Pick booth at the Lavender Festival. (Desirée Decoste/Gazette Staff)

“People come and spend the whole day here,” Leblanc said. “I’ll see them in the morning sitting in a chair, they walk around a bit come back and sit in a different chair, and they can eat on the premises because we have food vendors.”

“There is a lot of interest for a second weekend,” Leblanc said. “I’ve had about four or five calls this morning (Tuesday before 11 a.m) asking if the festival was from 10 a.m. – 5 p.m. again and they were coming.”

Many prizes were/are available to be won as door prizes and are drawn every hour at the festival along with two main prizes. First prize is a two night stay at the BnB on Lavender Farm and second prize is a lavender gift basket valued at $100.

Food vendors were also a hit this weekend. 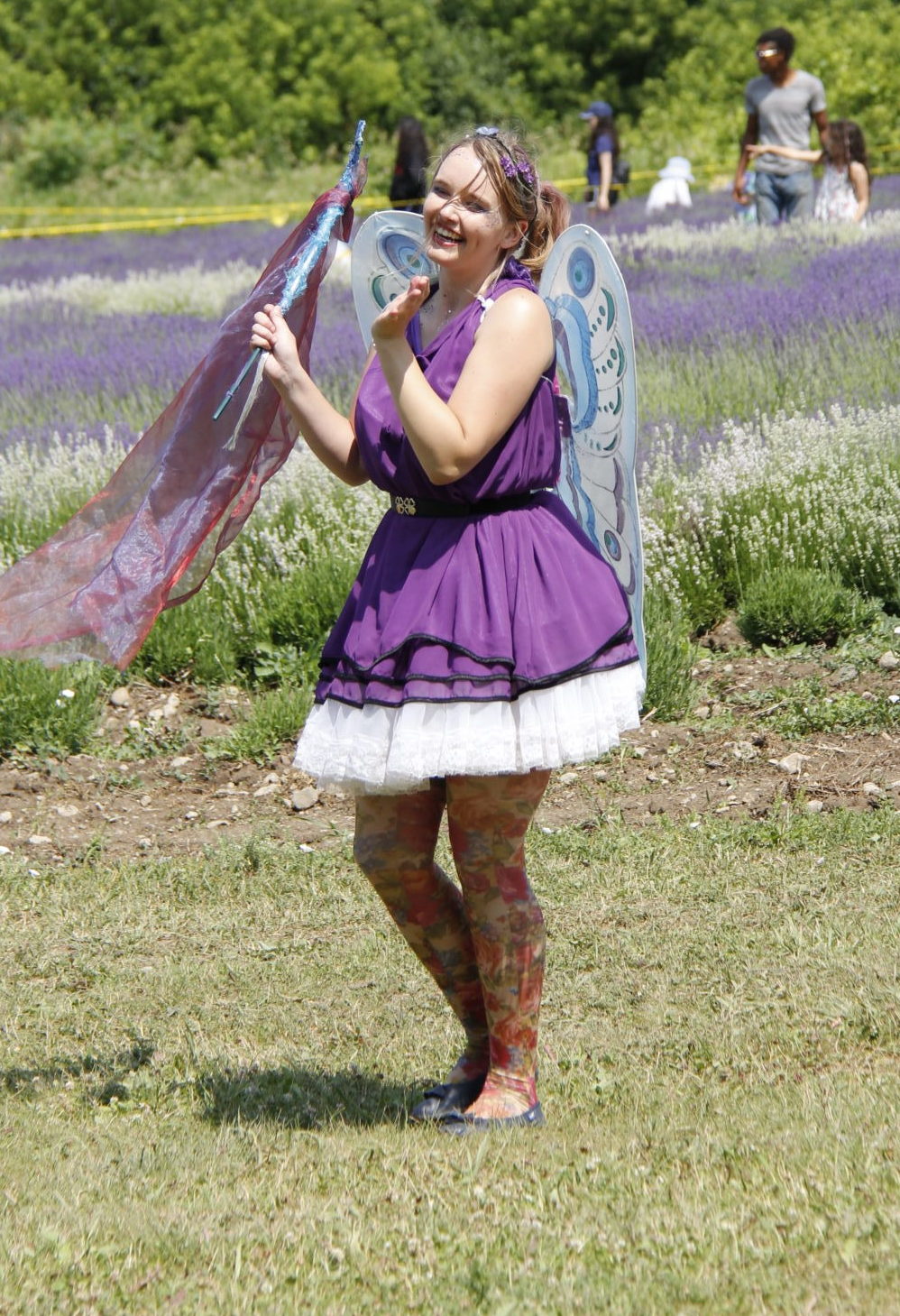 LAVENDER LADY Lavessa the lavender fairy (Melissa Radford) is a new feature at this years festival. Lavessa greeted and welcomed the guests and entertained them through out the weekend. (Desirée Decoste/Gazette Staff)

Land & Bog will be there both weekends and serving up delicious bbq, one rib, pulled pork and side of beans at a time.

Picnic PEC was only there this past weekend but was serving up delicious meals such as Picnic Chicken Sandwich which is buttermilk soaked, battered and deep-fried chicken topped with a seasoned mayo, tomato, pickles and lettuce, served on a bun. Grilled Haloomi, burnt Eggplant, Pickled Red Onion, Cucumber, Arugula and Tahini Sauce on a Brioche Bun and Jap Chae Korean noodles with marinated tofu, peppers, onions and mushrooms with a sesame and soy dressing.

Papa Ghanoush & Momma Hummus is there both weekends and after arriving in Canada in 2016 and making their new home in the beautiful town of Wellington, Prince Edward County, Adnan and Suhaila want to share some of the exotic flavours from their birthplace.

And Maple Pork Sausage will only be serving the second weekend and will be offering their delicious maple pork sausage on a bun and their hamburger.

“Tasting the lavender gelato and lavender lemonade has to be part of the event,” said Leblanc. “A lot of people don’t know you can associate lavender with culinary products so it’s kind of an education thing, as well with the essential oil and explaining how it’s made.”

The event carried a ‘kids zone’ with Daniel the Balloon Genie, an inflatable castle maze and a professional face painter.

New this year was a Lavender Fairy to greet, welcome and entertain guests of the festival.

“I’m so happy to be here enjoying the scent of the lavender,” expressed Lavessa the lavender fairy (Melissa Radford).

Other activities include a demonstration on how lavender essential oil is distilled, U-Pick Lavender, Kristie’s Little Portable Petting Zoo, Massage in the field with Karen and Becky (fees apply), find a fossil, horticulture booth to purchase lavender plants, a Métis Dot art workshop (on July 13th only) and the Boutique will be open during the festival.

“I come from a small village in the Gaspé area and we used to have a festival every summer and the whole family was involved,” Leblanc said. “At the end on the Sunday evening because everyone had fun and had a good time there was that feeling of accomplishment like we achieved something and shared something with these people they wanted to have. Now, we have these two fields in Prince Edward County so why not share with the public?”

Admission is $10 per person and children 12 and under are free.

On the farm are also beehives and organizers ask you respect the bees as they do their work.

Dogs are not allowed on the property during the festival as a petting zoo is on-site.

The festival is a cash only event.