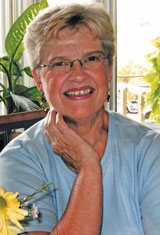 Carol Striker Emlaw
December 23, 1942 – July 4, 2019
Carol and her sister Lois grew up on a County farm with parents Merle and Gordon Striker on what was then called Royal Street, now Royal Road.  She did well at school, but at 19, with school behind her, she had no thoughts on what she wanted to do.   (Let it be said that Carol had what many observed you could only describe as, well…a wild side. She came to know something about fast boys and fast cars—and knew how to drive them.) Having some insight into this, her mother wasn’t about to allow her daughter extra time on her hands to develop that side.   Merle drove her to the Bank of Montreal branch in Picton and persuaded the manager that her daughter was prime material for a starting position as a teller.  A brilliant move. This was the start of something great. Carol thrived in the banking world.  It was to become her life’s work. Meanwhile, Carol had met a young County man named Dick Pringle, also at Bank of Montreal. They dated, married spent 3 years in both Picton and Kingston and then moved to Newmarket, where they had a son, Todd. The following years saw great changes in Carol’s life. Some ups, some downs.  She and Dick ended up going separate ways. Todd stayed with Carol for most of the ensuing years of his youth.  Carol’s career flourished. She held several positions in Canadian banks, most notably in Calgary and different Ontario communities with what was then known as Canada Trust.  She retired, finally, from a branch manager’s position at National Bank and retired to Picton where her recently widowed mother lived.  Her mom eventually married a fine man Cliff Woodley, whose daughter Janice, her husband Warren and sons Wesley and Nolan were a long-standing extended family for Carol and Lois.  After a few years Charlie Emlaw came into Carol’s life.  Carol and Charlie had already known each other.  They had grown up at the same time, going to church and school together back on Royal Street.   They were married on January 27, 2007.  You may hear “love of her (or his) life” occasionally, but this was the real thing. They were inseparable and enjoyed 18 healthy years together, travelling to Florida and Mexico when it got cold.  Charlie’s two children Sabrina and Jamie along with Sabrina’s husband Jody and their daughters Libby and Lola formed a deep bond and enjoyed many summers at the camp grounds and regular family visits with Carol and Charlie.  Soon after, Lois and her husband Grant moved to the County part-time and the four of them spent many treasured nights on the cottage deck overlooking Picton Bay. Lois and Carol were thrilled to be in the same town again and got up to “no good” on a regular basis.  They were as close as two sisters could be. A very big thank you to Dr. Burke and the wonderful Prince Edward palliative team, including Lianne and Peggy-Sue. Thanks to them for their great care for Carol in her final days.  Carol is survived by her much loved son Todd, husband Charlie and her sister Lois Reynolds (nee Striker) and brother-in-law Grant Reynolds.  She will be greatly missed by her niece and nephews and their children. Too many dear long-time friends to name, but they will all be sure to raise a glass (and it better be a martini!) to the woman who knew how to create a good time …rock on Carol, rock on! In lieu of flowers, please consider a donation to either, The Hub at thehubcentre.ca/the-hub-children’s-gardenproject or  Hospice Prince Edward at hospiceprinceedward.ca