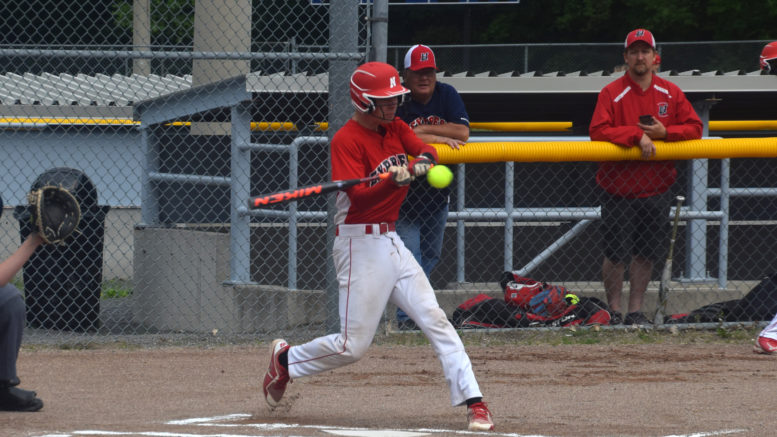 A pair of Prince Edward County born-and-bred fastball players are heading to Saskatoon, SK next month to play in the U16 Boy’s Canadian Fast Pitch Championships later this month.

Nic McGrayne and Aiden Reddick are starters with the Spud’s Restaurant U16 Napanee Express and helped their team to an undefeated appearance at the Ontario Amateur Softball Association’s Elimination Tournament in Grafton, ON last weekend.

The backstop for Express hurler Conner Brooks, McGrayne allowed just one passed ball in five games and helped his pitcher by calling a pair of no-hitters Napanee’s romp to the Ontario title. 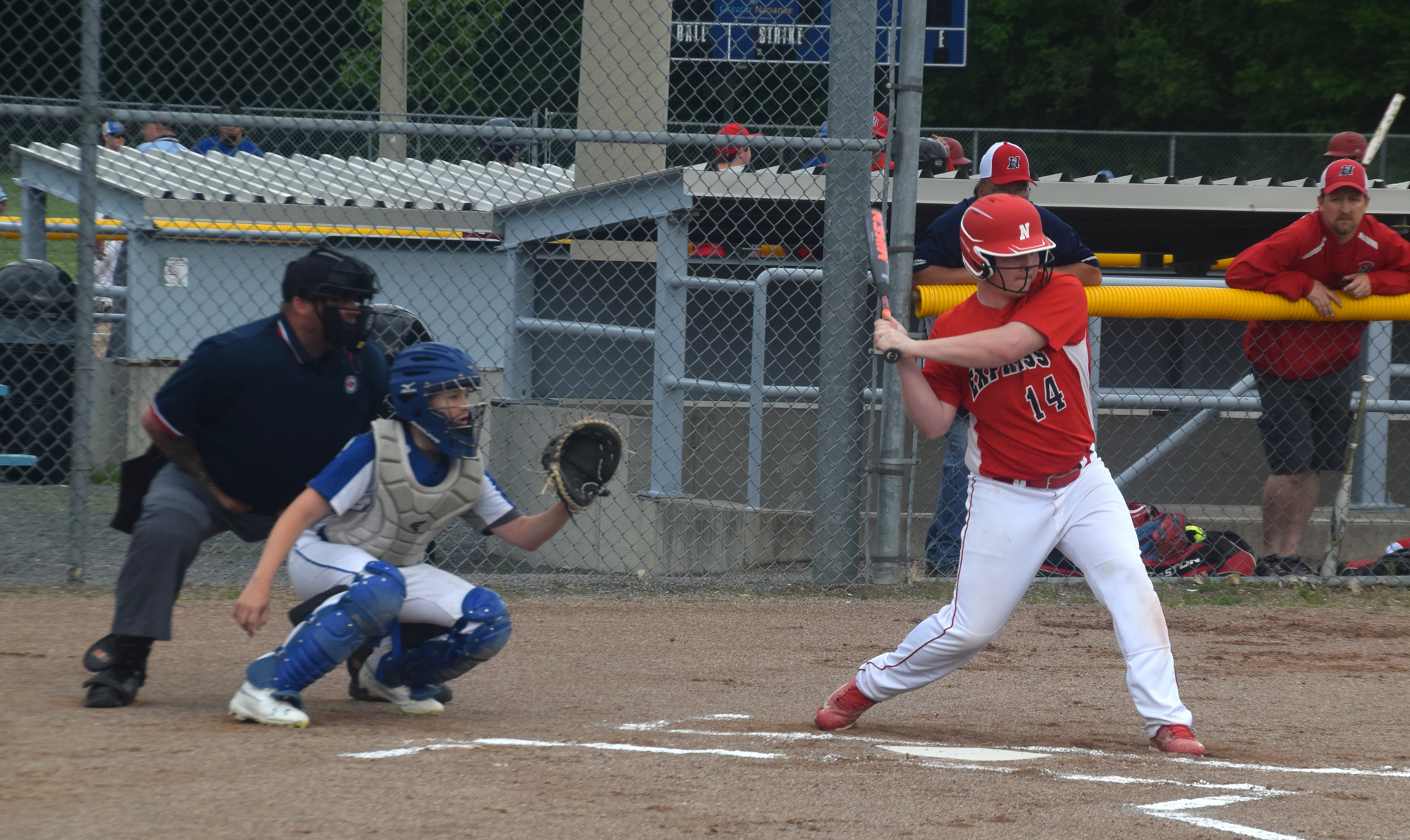 Ready for it Napanee Express U16 third baseman Aiden Reddick performed well for his club, providing clutch offence hitting sixth in the lineup of the OASA champions. (Adam Prudhomme/For The Gazette)

Meanwhile, Reddick, the club’s third baseman, showed fine form in the field while providing some pop at the plate batting on the sixth spot in the batting order.

Express skipper Corey Brooks pointed to the depth, attitude and instilled work ethic in the club as to why the Napanee squad was so dominant their five games

“The players throughout our lineup and our depth on our bench is the reason why we were able to do what we did this weekend,” Brooks told the Gazette Monday. “We were in the gym every night starting in January straight through our tryouts in May. We work hard at being good at the positions we play.”

Conner Brooks, who also pitches for Napanee’s U19 team, would wind up being named the tournament’s top pitcher, surrendering only five base hits and allowing just a single run the entire tournament.

But in the sport of fastball, success can often be boiled down to a pair of key attributes and having a game caller and field general such as McGrayne backstopping a flame thrower like Napanee’s hurler ensures the Express have a pair vital boxes checked off.

“Nic is very much my pitcher’s left hand. He and Conner work very well at being on the same page and being able to approach each batter with a game plan,” the coach said. “Having played together for so long, that approach goes a long way to our success. Having a smart catcher goes a long way to having a dominant pitcher and vice versa.”

Conner Brooks, who fanned ten Shallow Lake Sting batters in Napanee’s first game of the tournament, kept opposing hitters off balance the entire weekend but he and the Express certainly made a statement in the opener. 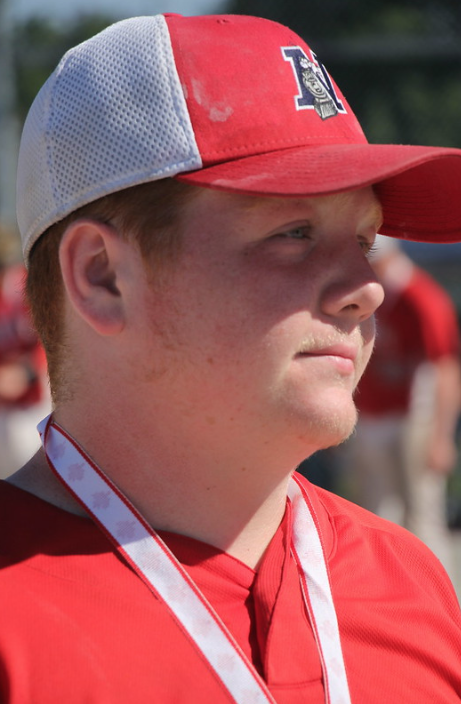 Thanks to a new lottery system employed by the OASA, the draw for the tournament ensured a top team would be eliminated early.

No longer having the schedule based on arbitrary rankings, the Express would wind having to play Shallow Lake, who were considered to be neck and neck with the Express when figuring who the top team in the tournament was, in the third game of the Elimination.

“We felt like we were going into the undefeated game in our first game of the entire tournament,” Brooks said.

Had Napanee fallen short of capturing gold in Grafton, any observer could have pointed to the draw as hamstringing the ball club.

But the Express were having none of that early on as they pounded Sting pitcher Drayton for six runs in the first three innings en route to an 8-1 triumph.

In their second game on Saturday against the Fisherville Flames, Conner Brooks the Express kept rolling and dominated their opposition a 7-0 victory that was called after four innings.

The win was the first of two mercied no hitters the pitcher would throw.

Up next for Napanee were the Port Perry Angels who ere also thumped in a 7-0 whitewash as the Express offence and pitching was in fine form and Conner Brooks twirled a second shortened no-no.

In the undefeated game on Sunday, the Express and the entry from Simcoe locked horns and the matter was solved quickly as Napanee breezed by the Braves 5-0, a club full of first year players competing at the U16 level.

The win ensured the Express were heading to Saskatoon for the Canadian Championships but the club knew the desired red OASA Pennant was hanging in the balance and the team wanted to finish the tournament with the form they had shown all weekend.

“At the start, we were playing in the games that should have been happening much later in the weekend but our composure and focus was crystal clear on our approach and how we wanted to finish this tournament,” Cory Brooks added.

Napanee would cap off the weekend drawing the Flames once again and were able to whitewash the entry from Fisherville in a 10-0 romp. 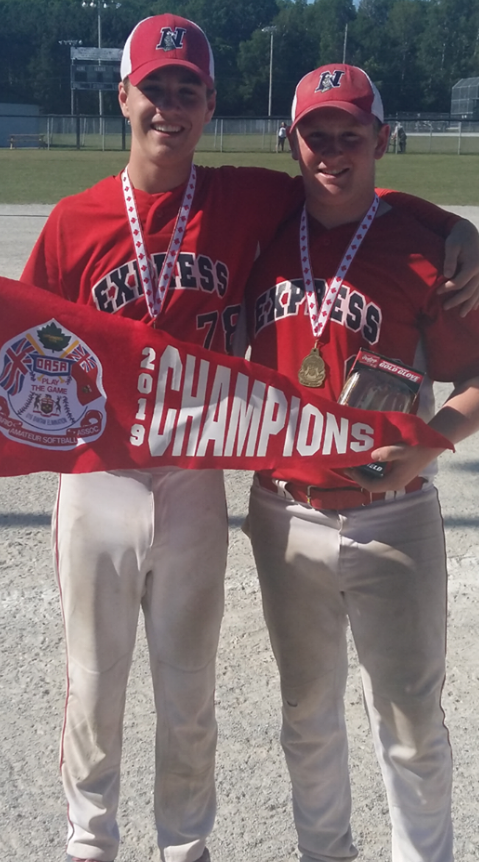 While the defence and pitching certainly gets most of the glory when it comes to fastball, Napanee’s hitting was phenomenal as well and both McGrayne and Reddick factored heavily in the proceedings from the plate.

The speedy McGrayne provided spark at the top of the Express lineup while Reddick, best described as ‘country strong’, has some thunder in his bat.

“Aiden’s a very big part of our team and someone who can hurt you in the middle of our batting order,” The coach said. “You get through our 3-4-5 hitters and here comes this first year player and he’s hitting them off the fence. He hit the ball well, he’s a strong, talented kid.”

The U16 squad will join the U14 and U19 Express teams on the national stage in August, making Napanee a rare triple header town when it comes to Canadian softball showdowns.

Cory Brooks said this weekend’s tournament hasn’t really set in yet but the ball club understands it’s on the verge of something magical.

“I think we are very close to our ultimate goal. Did I think as a coach we would go Grafton and beat up on the opposing teams? No. But with good hitting and good pitching we were able to do that,” Cory Brooks said. I’m excited to see what we can do at the next level.”