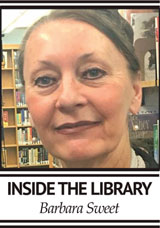 The Friends felt it would be a fitting association for a library and a way to honour the world-renowned poet and famed Roblin Lake resident.

July 1st this year marked the fifth anniversary of the A-frame (the Purdy cottage on the lake) as a writer’s residence.

On that date the first of many aspiring writers arrived in Ameliasburgh Township.

The Al Purdy branch library, just down the road from the cottage, has welcomed many of the writers-in- residence since.

There have been welcome teas, readings and shared activities with the A-frame and its many talented residents.

This year Cornelia Hoogland was one of those talents featured at the Authors Festival in April.

If you visit the library you will see a bust of Al Purdy, some of the many medals that he was awarded over his career and of course you will be able to access his extensive body of work.

Over the past five years library programming has been enriched by the association with the Writers-in-Residence program of the A-frame.

This year A-frame board member and retired English professor Brian Way who will, on Aug. 25th, deliver a lecture entitled “Under the Verandahs of the County: The Place of Al Purdy”.

The talk will explore how Al Purdy came to be as significant a writer as he is in Canada and internationally.

On Oct. 22nd Brian has arranged for a second talk in the series by Carson Arthur of HGTV and Carson’s Garden Market in Prince Edward County fame.

The two lectures will bookend the Open House weekend at the A-frame.

For a second year the famed structure will be open to the public over the Ameliasburgh Fair weekend, Sept. 21 and 22.

On Aug. 8th at the Drake Devonshire in Wellington, Damian Rogers, current resident of the A-frame, will be hosting an “eclectic night of performance highlighting writers, artists and musicians”.

The event will feature the materials created in the A-frame.

Damien, has been an arts editor at an urban weekly, a poetry editor for the House of Anansi Press and The Walrus magazine, the creative director of non-profit educational organization Poetry in Voice and the co-host and literary curator of The Basement Revue.

She is the author of two poetry collections, Paper Radio and Dear Leader.

This promises to be a unique evening that you will not want to miss.

A portion of the proceeds will benefit the Picton library “Time to Renew” capital building fund.

Brian Brett is the final writer to inhabit the A-frame this year. He has had a careers as editor in journalism and his essays have appeared in most major magazines.

His project, to be presented at the Wellington branch Dianne Cranshaw meeting room (Date TBD), is an audio visual presentation of the natural history of the human voice and our use of words.