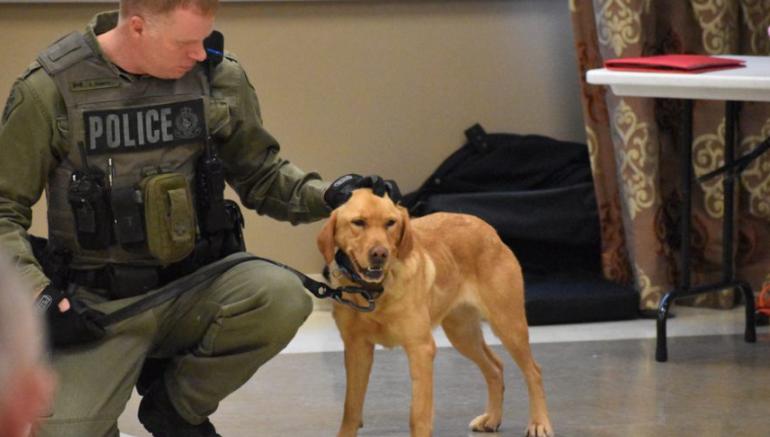 A Prince Edward County OPP officer and his police service dog are very much a part of the happy ending of a search of two teen age girls reported missing in Algonquin Park.

Constable Scott Gannon and Zoe, his specialized tracking dog, were part of a major search effort that began on Saturday morning as members of the OPP Emergency Response Team (ERT), front line members from several OPP detachments, and several OPP Canine Units converged on the area assisted by Park Wardens and members of the Ontario Search and Rescue Volunteer Association (OSARVA).

Marta Malek and Maya Mirota, both 16 years of age from the Kitchener area, were reported missing at approximately 10:00 p.m. on Fri, July 12. The girls were last seen Thurs. July 11, 2019 on the Western Uplands Trail, between Rainbow Lake and Susan Lake.

On Monday morning, Gannon, Zoe and the OPP search team were able to find Malek and Mirota who were somewhat dehydrated but in otherwise good spirits.

The pair had been part of the Polish Scouting Association of Canada camping group who were  taking part in a six day excursion in the park and both were experienced campers. The OPP reported the two young women had a tent, other equipment and limited supplies.

In an interview with the CBC, Gannon said Zoe, a two year old Labrador, picked up the girls scent and started towards the wayward teenagers.

“She became excited and we watched her and then she proceeded to go down the trail,” Gannon told the CBC.

The PECI alum who has served the OPP in several units and capacities throughout his long career in policing said officers could hear Malek and Mirota blowing whistles and calling out before searchers could make visual contact.

“As she was going down the trail we started calling the girls name and, at one point, we could hear them call back,” he added.

Just before noon on Monday and approximately 290 km west of Ottawa, Gannon and his team were able to radio search headquarters and announce the subjects of the two and half day search had been safely located.

On Tuesday morning, Detachment Commander John Hatch was beaming like a proud papa and speaking to this ‘”Good News” story that positively reflected on Gannon and Zoe.

“Of course Constable Gannon is one who likes to stay out of the limelight and gives all the credit to Zoe but he is a true professional police officer who is very good and dedicated to his job,” Hatch told the Gazette.

Hatch said as one of six canine OPP officers serving in East Region, Gannon lives by his cell phone and pager and is always ready, day or night, to respond with Zoe or his general service dog Bullet.

“At anytime, that cell phone or page might go off because someone is missing or we need to chase down some bad guys and he’s always ready to answer a call,” Hatch said. ” “I know everyone in the detachment is thrilled this had a positive outcome and Scott and Constable Troy Bellehumeur had a role to play in it.”

Bellehumeur, also stationed at the Prince Edward detachment as a long time member of the local constabulary, was involved in the Algonquin Park rescue operation as a member of the ERT response.

This story was edited to include comments from Staff Sergeant John Hatch.