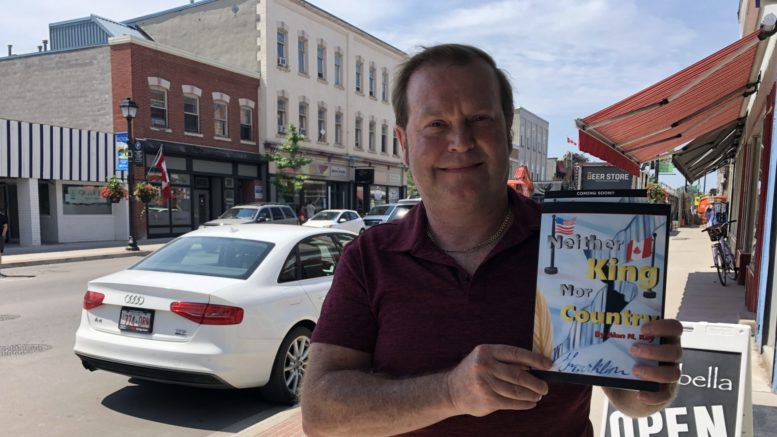 A highly decorated high school history teacher from the United States paid a visit to the heart of Loyalist country earlier this month.

And there was certainly something serendipitous about Alan Kay discussing the research into his historical fiction novel Neither King Nor Country in the offices of Canada’s oldest community newspaper on the day reserved for celebrating his home country’s independence.

The visit to Prince Edward County and the surrounding area held in high value by Loyalist descendants such as the landing place in Adulphustown is part of a reckoning this proud patriot and fan of George Washington has been undertaking over the last decade or so.

A man whose efforts were recognized by the Daughters of the American Revolution as the Outstanding American History Teacher of the Year in 2002 has found part of his family took part in the northern migration after the colonial revolt in the mid to late 1700’s and a page turning read that should appeal to readers on both sides of the 49th parallel is the fruits of that deep dive into the pages of his own family history.

“I have always tried to present a balanced approach both as a historian and as a teacher to my students and present both sides of the picture,” Kay said of his teaching efforts.

A natural history buff, Kay became enthralled with George Washington during a fourth grade reading assignment and the native New Englander who now teachers in Tarpon Springs, FL even spent time researching the first US president at Mount Vernon.

But as he started to look up his family genealogy, a startling discovery was awaiting Kay.

It wasn’t John Adams, the second US President and subject of the popular HBO mini series that Kay was related to but rather John Adams, a Loyalist whose family settled in the British North America portion of the Maritimes and later had an island off the coast of Newfoundland named for him.

The proud American who’s life revolved around history and had always taken great pains to present a creative and balanced approach to the crucible moment of his native land now had a whole new perspective and lens to examine the past through.

And that research has lead to Neither King Nor Country , a novel featuring the fictional Rob Callahan, an average middle aged teacher  and rec league hockey player from the northeast who is about to undergo a seemingly predestined transformative journey-whether the main character  wants to or not.

“It’s kind of a personal journey, the character sometimes reflects myself and other times doesn’t,” Kay said.

Kay’s research into his own familial path and the crafting of the well-written book has had a side benefit for his students in that the educator has been able to provide more pieces of the Loyalist experience following the fallout of the American Revolution.

“We’ve had the students take sides and rehash the arguments and actions right down to the tarring and feathering,” Kay said. “One of my characters in  Neither King Nor Country, a person that was on the fence as to whether to join the revolution or stay loyal, witnesses a public tarring and feathering in person and he was abhorred by it all- the act and the barbaric behaviour that took on the spectacle of the coliseum and it leads the character to the Loyalist side.”

Having toured the Maritimes previously with visits to Loyalist landing places in New Brunswick and Nova Scotia, Kay said he was very impressed with this area and how names and dedications seemed to reciprocate his former stomping grounds in the New England area.

“It’s interesting that Prince Edward County reflects our experiences in New England and the colonies. We have the Minutemen Parkway, we have the revolutionary historical sites and museums in Virgina, we have the plaques in all these towns and public spaces and here you have not only the Loyalist traditions and settlement area but you also have Tyendinaga close by and (the indigenous people) obviously played role on both sides as well. You’ve got everything here. Loyalist remembrances are everywhere but, at the same time, they are subtle and natural and it’s all very tasteful,” Kay added.

And the settings are perfect- at least this time of year for a transplanted Yankee who enjoys the school year climes in the sunny south.

“It’s truly breathtaking in terms of natural beauty. We visited Lake-On-The-Mountain and we said “Wow, the King of England truly gave the Loyalists an absolute paradise’. Of course this the summer time and we know what comes next,” Kay said with a laugh.

With the benefits of hind sight, descendants of Loyalists tend to speak proudly of their ancestors making the trek to this sparsely populated, at times cruel and unyielding region and setting down new roots.

But that side of American history that tore families and friends apart isn’t exactly dinner table discussion in the homes of our long lost U.S. cousins.

“Americans don’t really like talking about it or discussing the Loyalists and really haven’t up until about 20 years ago,” Kay said. “My character finds out that his family was divided and he really doesn’t want to talk about it our discuss it with anyone at first but I think the time is coming where we in the United States are are ready to discuss and get deeper into what happened and see how it played it out from the other side and maybe this book could be a starting piece to that larger discussion.”

The book is available through Amazon, electronically through a number of modalities as well as a limited number of copies available at Books & Company.