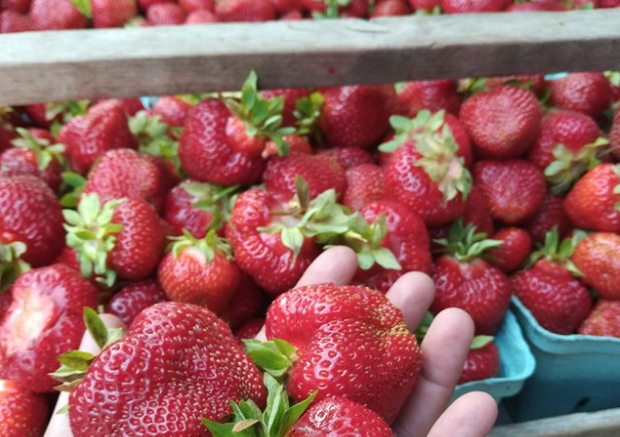 IN SEASON- Prince Edward County is one of the few counties in Ontario that produce far more fruits and vegetables, such as these strawberries at Hagerman Farms west of Picton, than the permanent citizenry can consume. (Hagerman Farms photo)

A small but engaged audience gathered Tues., July 9 in the Picton Town Hall for a presentation by Steve Duff, chief economist with the Ontario Ministry of Agriculture, Food, and Rural Affairs (OMAFRA).

Duff’s presentation resulted from a meeting that Karen Fisher, regional advisor for OMAFRA, had with the Community and Economic Development Commission.

Among several key components, Duff touched on how the local food system is affected by shifting global trade, the inherent and potential value of our local food system-both for consumers and producers-as well as the unique agricultural profile of Prince Edward County.

For anyone who is aware of the burgeoning food scene in Prince Edward County or perhaps has frequented one of the many local farm stands, it should be no surprise that the local food movement has garnered more attention of late.

“The past couple of years the role of agri-food in a local setting has really taken off,” Duff said.

Delving first into the topic of trade, Duff asserts that the County is in a prime position to trade with Canadian cities such as Toronto, as well as with the U.S.

“The reality is, we have a large income and growing population in this province and the things that they demand, we can’t produce in totality today. We might be able to over time, but certainly we can’t produce it all now-so it’s important to understand how trade fits into all of this,” stated Duff.

According to Duff there are 40,000 farms in the province along with 4,500 food processors. He describes this as being a far more concentrated food system than before,wherein around 45 per cent of agricultural production in the province is produced by about 2 percent of farms “and that 2 per cent is not here,” he stated.

“The sooner you can accept that we’re part of an integrated North American Food Market, the sooner we can get down to the business of trying to add value to the local level,” said Duff, “There’s opportunity for both to exist and exist well,” he added.

Arguing that many of the problems the food system faces today are not unlike that in times past, Duff implored the audience to consider the evolution of supply management after both world wars.

With growing populations comes a greater demand, for food and otherwise.

The crux of the issue is, Duff asserts, that in many areas the amount of farmland lost is not as dire as some may think, emphasizing that there is a difference between land that could be farmed (i.e. zoned agricultural land) versus land that’s actually farmed.

“There’s recently been a drop off in crop production despite a consistent amount of zoned agricultural land,” he commented.

One thing that OMAFRA is closely monitoring is the availability of farmland for rent.

Citing the County as an area of rapid development, Duff iterates that agricultural land rental needs to be considered seriously.

Duff also postulated that the amount of people who are non-farmers who own farm land and are willing and able to transfer that land to someone who will use it speaks directly to the public’s value of agriculture in general.

In his presentation, Duff isolated two key ways in which under-utilized land in the County could be used.

“When you’re dealing with a lot of under-utilized land, and it being small non-contiguous parcels, the people who own that probably don’t live around here and that’s an opportunity for someone to expand into the agri-sector.”

Furthermore, Duff touched on the concept of surplus dwellings on farmland.

Duff stated that this area has a high number of vacant houses that sit on farmland. Though the land may be in use, the houses are often left vacant and eventually get destroyed.

“In an area with rising housing costs and an income gap that is ever-widening, that’s an important aspect, where if farmers or land owners had an incentive to keep that house, that’s important,” stated Duff, when speaking about the potential of surplus dwellings to alleviate some of the disparity caused by the affordable housing crisis.

Speaking of the importance of playing to one’s strengths, Duff noted that Prince Edward County is largely a fruit, vegetable and beef producing county. However, he also mentioned that a key strength amongst farmers here is their propensity to sell directly to consumers.

With a population that is apparently declining while at the same time growing in age, the County is unique compared to many other areas. Though the changing demographics here may mean there’s less food consumed in general, it also means there is more of a demand for fresh fruit and vegetables.

“Prince Edward County is one of the few counties in the province, that from a fruit and vegetable point of view, annually produces more than the permanent population would consume,” said Duff

Furthermore, the County is outpacing the rest of the province when it comes to organic farms, with

14 certified organic farms here and a production rate that is about double what it was in 2006.

“105 farms in the County sell directly to the consumer, which is about 24 per cent in total and much higher than the provincial average which is only 14 per cent,” he stated.

Throughout his presentation, Duff created an agricultural profile of the County that speaks to our strengths and weaknesses.

Without a doubt, the County continues to change in myriad ways. But perhaps some of the ways in which agriculture will change can help to alleviate some of our biggest issues here in the County.