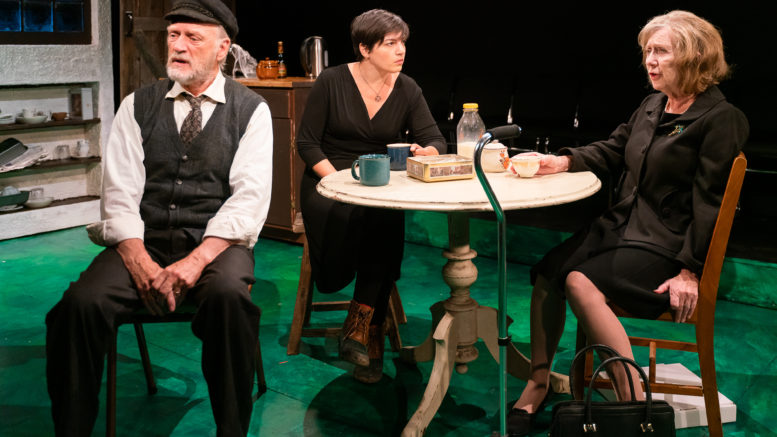 For anyone wishing to travel to Ireland, they need not go any further than The Festival Players Studio Theatre to see their first play of the 2019 season, Outside Mullingar.

Written by Irish-American John Patrick Shanley, the play is a witty juxtaposition of melancholy and humour, typical of Irish works.

Outside Mullingar delivers a “lyrical misfit romance, full of gallows-humour, wit and wonder”.

This is a one act play in which the characters are introduced after attending a neighbour’s funeral. Sitting around his kitchen table drinking whiskey, aged farmer Tony Reilly (Nigel Bennett) confesses to his neighbour Aoife Muldoon (Wendy Thatcher) that he intends to give his farm to an American nephew.

When Rosemary Muldoon (Lisa Norton), Aoife’s daughter and Reilly’s neighbour, appears on stage she descends upon the two old cronies and firmly insists they have some tea, all while telling old Mr. Reilly that his son, Anthony (Graham Cuthbertson) should get the family farm.

Set amidst the Irish Countryside, Outside Mullingar is a tense story of love, land and the myriad disputes that can occur when these two things overlap. It is a story of people inexplicably and inconsolably drawn to the land and to each other.

Shanley is a well known playwright, screenwriter and director. His screenplay, Moonstruck, won the 1988 Academy Award for best original screenplay and his play Doubt won the 2005 Pulitzer Prize for Drama.

The intimate setting at The Studio Theatre serves to heighten the intensity of emotions at play, with the audience forming a horseshoe around the small stage.

Every clap of thunder or wail from the stage reverberated throughout the audience.

After the play, Paul Flicker, Managing Director and Producer, took some time to speak with the Gazette.

According to Flicker, it was a last-minute stroke of inspiration that brought Outside Mullingar to Prince Edward County.

“We looked at Canadian plays, American plays, British plays and Irish plays going through much of the cannon from the last 50 years. Initially, we had selected another work,” he added, continuing, “I think it was around midnight the night before the board meeting to announce the season when Dylan suggested Outside Mullingar and it all clicked. Sometimes you know a year out what you want to do and sometimes it all just comes into place at the last minute. Outside Mullingar just felt right to all of us.”

No doubt, the architecture of the small theatre in Wellington will command the type of performances that are brought there.

“Our strength is the proximity of the experience,” said Flicker. “There are few venues in Canada where you can get so up close with actors like Wendy Thatcher (27 seasons at the Shaw Festival) or Nigel Bennett (The Shape of Water).”

Festival Players is producing two plays this year, with Outside Mullingar being the first. The second play is Every Brilliant Thing starring Gavin Crawford. As well, the theatre company is presenting The Script Tease Project at the end of July and Person of Interest by Melody A. Johnson at the end of August.

Flicker recommends that those who wish to see Every Brilliant Thing buy their tickets ahead of time, as Outside Mullingar has been nearly sold out since the first preview (there are only a few tickets left for this upcoming weekend).

With an objective to provide productions on par with the best theatre festivals in Ontario, Outside Mullingar is a strong foot on which to start Festival Players’ 2019 season.