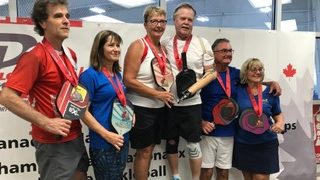 A Prince Edward County native and his playing partner from Stirling are on the top of the Canadian Pickleball scene for 2019.

Barry Matthie of Bloomfield and partner Julie Cadeau went undefeated through the Canadians in Kingston earlier this month in the 60+ division at the 3.0 skill level.

Matthie and Cadeau met up with the entry of Pierrette Guitard and Jean-Pierre De Beaumont represting the Fédération Québécoise de Pickleball in the gold medal finals and downed the opposing duo for a second time in the double elimination tournament.

Not a bad result for a team that had no idea where they stood amongst the several scores of teams competing in the Limestone City Canada Day weekend.

Or for a player like Matthie who only picked up a pickleball racquet five years ago when a drop in night of the fast growing paddleball sport at PECI. “I’d never played it or even knew about it before then,” Matthie told the Gazette.

Combining elements of tennis, badminton, and table tennis, Pickelball was invented in the 1960’s. Two or four players use solid paddles made of wood or composite materials to hit a perforated or Wiffle Ball-style orb over a net. The court layout is similar to that a badminton court with a knee-high net and rules somewhat similar to tennis.

From those early beginnings trying out the sport at the local secondary school, Matthie now plays year-round when his schedule permits including indoor sessions during the winter at the Quinte Health and Wellness Centre and at an outdoor club in nearby Bath.

“It’s really great exercise, it’s a lot of fun and it’s sort of for an older person so we’re all able to do it,” Matthie said with a laugh. “It’s a lot like tennis obviously but there’s a little less running because of the shorter court.”

The 2019 Nationals in Kingston was the first time Canadian titles were vied for on Ontario soil and the 2020 event will also be held at the same site.

Matthie said he and Cadeau are planning on competing at the 2020 tournament before the championships relocate to another part of Canada and the distance becomes a barrier.

However, the team will need all those winter time games in order to sharpen their skills as Matthie and Cadeau will be elevated to a higher skill bracket next season.

But no matter what happens in 2020, there’s no taking away the gold medal or the style in which it was attained.

“The adrenaline was pumping all the way through the tournament,” Matthie said.