THE BIG CLEAN UP- Members of the public gather broken plastic and other debris at Sandbanks Provincial Park on Friday. (Jason Parks/Gazette Staff)

The friendly and helping hands were at the ready Friday morning as Sandbanks Provincial Park celebrated the annual Healthy Parks, Healthy People Day with a public shoreline clean up session.

Volunteers and members of the Friends of Sandbanks group who were admitted to the park for free as part of the iniatitve  joined in with park staff to take part in local Great Canadian Shoreline Cleanup effort at the north shore of Sandbanks on Lake Ontario.

The long stretch of beach line that stretches from the former Lakeshore Lodge site northwest to the Wellington channel has been closed to the public in 2019 due to high water which has left very little space on the beach front and caused the parking area to be flooded.

With recent receding waters, Sandbanks Superintendent Robin Reilly opened this portion of beach Friday to allow for the Sandbanks shoreline clean up efforts to take place.

Reilly told the Gazette he planned on opening sections of the Sandbanks beach area as it’s cleaned of high water debris.

“It’s an insurmountable job and it’s not going to be crystal clear by the time we’re done but to involve the volunteers and get a start on it feels good,” Reilly said.

The Superintendent explained the water level is slightly higher than the last Lake Ontario flood event of 2017 and the elevated water mark has endured much longer.

This has lead to delayed openings and early capacity closings for Sandbanks as sandy real estate has become a precious commodity for sun seekers and those looking to refresh themselves in Lake Ontario, Athol Bay or West Lake.

By this time in 2017, the water had dropped quite a bit. Currently, if we get a strong wind, it could be right back to where we were and new plastic would be deposited,” Reilly said. “We are at about a 30 per cent reduction in terms of beach space so we are trying to be proactive through traditional and social media to let people know our status and to lower expectations of those arriving here.”

Even with the high water, Sandbanks benefits over other Provincial Park swimming hot spots due to its physical high profile, especially at the Outlet beach.

In spite of the water levels, Sandbanks still has more beach space currently than other Provincial Parks as those with a less gradual slope are dealing with far worse conditions. 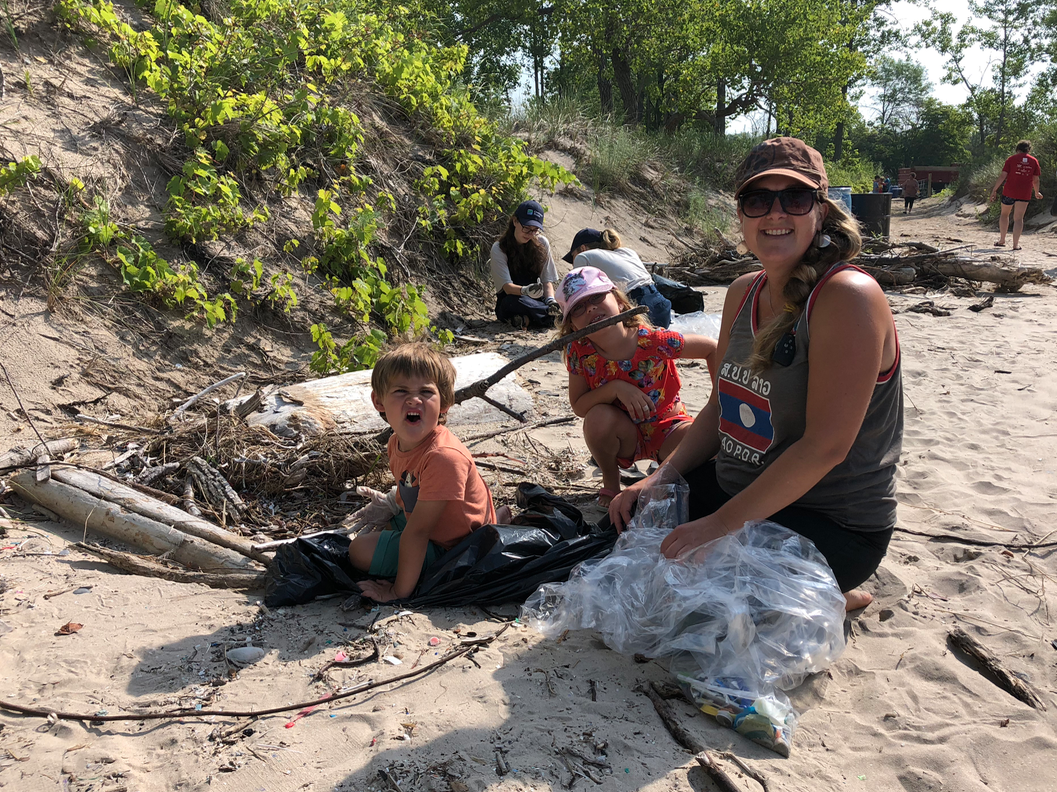 “If people are still looking for a beach, this is a better option than others,” Reilly said, adding the Sandbanks parking lot finally became accessible just a week ago although there were still some springy portions fenced off.

“It was just last week we were able to get in here and cut some grass and move some things around,” the superintendent added.

Local mom Brandy Monro-Dillon had Kanoa 3, and Lucy, 7 in tow on Friday as they took on the task of  picking up small pieces of single use plastic along the beach scape and flattened entrance way.

A regular visitor to the beach, Monro-Dillon said she brought her children to the clean up effort as a learning experience as to the harm plastic was having not just in far off developing countries but even close to home.

Thousands of small pieces of plastic that came from larger items that had broken up in the turbulent water were plainly evident and painted a depressing picture to anyone viewing during Friday morning’s clean up.

“I want to show them what plastic is doing to our beaches, the ocean and the great lakes and show the responsibility of taking care of the environment,” Monro-Dillon said. “It’s amazing and really sad, I certainly didn’t expect it to be this bad.”

The park is attempting to mitigate plastic use somewhat, offering water bottle refill stations in areas in the park and using recycled plastic composite material for benches throughout various locations in the park.