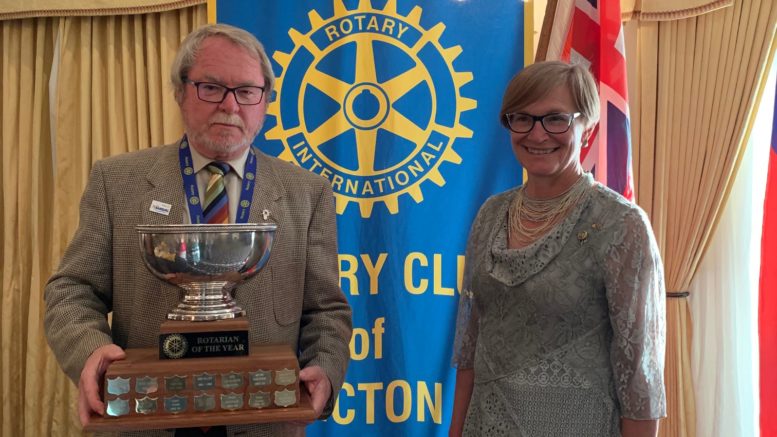 It was a year of ups and downs, successes and near misses for Rotary Club of Picton President Brenda Hellyer but at the end of 12 months at the helm of the club, she’s chalking her experience and the path taken by the local service group as a successful one.

Hellyer and her efforts were feted at the club’s annual President’s night recently.

“This year has had it’s ups and downs, something similar to riding a roller coaster but I feel it has been a very successful year,” Hellyer said.

Club successes which included increased totals from each of Rotary’s local fundraisers such as the annual Waterfalls tour and the Lilac Ride and personal successes that included personal growth and development.

“When I first started chairing the weekly meetings, I had no less than five members who took the time to come to me or send me email template agendas  of how the meetings could be run. I thanked all of them. Little did they know, I did have a template agenda in front of me at each meeting. I was just too nervous to actually see and read what I was supposed to be saying and doing,” Hellyer said with a laugh. “At the start of my year, I spent every Tuesday, all morning long, getting the agenda done; each time in bigger font and some areas even in red. Now I can say that I can whip up an agenda in record time and for the most part read what I should be saying and doing.”

“I have been touched to have felt the support of the Rotary family as I worked through my year,” she added.

At the start of her term in the spring of 2018, Hellyer laid out a set of ten goals she had hoped to accomplish and they centred around membership gains, attendance at district and leadership conferences and outreach to community partners

The president said self-accounting indicated she was 7/10 overall.

Among the goals Hellyer was most proud of was outreach to the Tyendinaga First Nation.

“To partner with a First Nations event with sweat equity or financially, I’m happy to say that we have started a reading buddy partner program with Quinte Mohawk School which has benefitted us as much as the students there. It  just goes to show you the one who serves the most, benefits the most,” Hellyer said.

President’s Night also served as an opportunity to honour a member with the Hepburn Trophy as local Rotarian of the Year.

Over the years, the Hepburn Trophy has been presented to many outstanding individual  in the club and, annually  there has always one person who has gone over and above what it means to be a Rotarian.

The 2018-19 Rotary Club of Picton Rotarian of the Year was introduced as Past President Rob Leek.

“This Rotarian has stood out in unwavering service to this club,” Hellyer said. “Rob volunteered to help out at all our major fundraisers; The Wilf Harrison Memorial Golf Tournament, the Lilac Ride, The Waterfalls Tour, Uncork Canada and helped sell a fair share of calendars. Behind the scenes at Hike for Hospice, he was there flipping burgers.

This President noted the Picton club, in conjunction with the Rotary Club of Wellington, were chosen to host the District Conference last October.

Without batting an eye, Leek agreed to chair the organizing committee  and post conference comments indicated ‘It was one of the best Conferences people had been to’.

When the club wanted to hold a special event to celebrate its 75th Anniversary, Leek again stepped up to the plate to organize the event.

“As a Past President, he shared his wisdom and with other Past Presidents,  brought the meaning and the practice of the Four Way Test to me thru several dilemmas during my year,” Hellyer added.