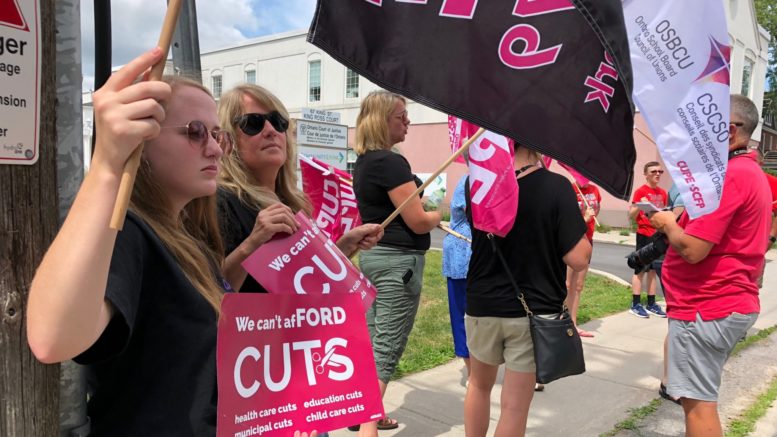 While the intended target of their ire was nowhere near Picton on Thursday, local union members involved in the education system still gathered outside the Community Living Prince Edward offices to voice their concern with Minister of Education Stephen Lecce.

The rumour mill was working overtime on Thursday as it was believed by some the MPP representing King-Vaughn was coming to Picton and, expressedly, the offices at 67 King St.

In response to Lecce’s reported arrival, members of the local Canadian Union of Public Employees and the mobilization unit of the Ontario School Board Council of Unions gathered on the sidewalk on King St., waving flags and holding up signs indicating they were unhappy with cuts announced by the Ministry of Education earlier this spring.

“We heard the education minister is going to be here and we are here to represent our local education system employees the cuts that are happening in education are not acceptable and these cuts are going to have massive impact in the class rooms in September,’ said Liz James, Area Five Mobilzer for the OSBCU.

Unfortunately for the protesters, there was some bad intel and Lecce was not in Prince Edward County on Thursday.

But ironically, Bay of Quinte MPP Todd Smith was visiting Prince Edward County that day and, after paying a visit to Prince Edward Learning Centre, dropped by the CLPE offices while protestors were present.

Smith did not address the protesters before entering the offices.

The OSBCU represents 55,000 non teaching staff education workers that include administrative staff, custodians and educational assistants who have all been impacted by reductions announced by Lecce’s predecessor Lisa Thompson.

Members are not only reeling from cuts that have cost staffing hours and eliminated roles throughout school board across Ontario but are also concerned as the Collective Bargaining Agreement between workers and the province is set to expire days before children return to classrooms this September.

James said there is always optimism that under Lecce there could be a shift in direction as the first term MPP assumed office just over a year ago however and took on the role in Premier Doug Ford’s most recent cabinet shuffle but with time ticking away and no formal negotiations scheduled, it seems almost certain members will start the school year operating day-to-day under the prior agreement in the void of a new negotiated settlement.

“We suspect we won’t have a collective agreement in place when we return in September so certainly there would be challenges moving forward and, with all of those cuts that have taken place already, there will be challenges for everyone-Students, teachers, custodians alike,” OSBCU Campaign represnetive Angel Sperry told the Gazette. “Our roles will be changing and there will be more work downloaded on to employees that are already over worked.”

While teachers at both the elementary and secondary panels have made their voices heard regarding the direction Ontario’s Conservative has taken with the education file, OSBCU members pointed out Thursday they also have been hit hard by the education restructuring.

“We are the educational assistants providing that one-on-one support for the students that have the highest needs. We are the  secretaries that make sure everyone has arrived safely and answering the buzzers at the door. We are the custodians keeping the school clean and safe and we are the library techs fostering those safe, inclusive spaces. Schools can’t work without us and we are the power of public education,” James added.