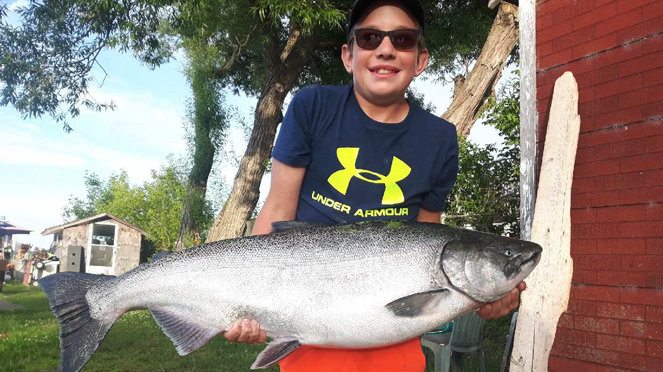 A seemingly permanent fixture on the Junior Pike leaderboard over the past several Kiwanis Walleye Weekend tournaments, Caley and his father Chris left for the happy salmon hunting grounds off the southwestern coast of Prince Edward County Mon. July 15.

After hooking into the fish, it took Ethan 40 minutes to net it and, with little time to spare, the father and son fishing duo made it into the Weller’s Bay weigh station to beat the daily weigh in deadline with just seconds to spare.

At the time it was entered into the Great Ontario Salmon Derby, it was the second place fish for the weekly contest.

While Ethan’s entry would wind up fifth overall for the weekly portion of the Derby, the king netted the young County native the Rapala Angler of the Week award that brought home a prize package of fishing gear worth $1,000 and the 5th place prize worth $2,175 in cash and prizes.

Not a bad way to celebrate Ethan’s 11th birthday as he did on Friday with, what else but another big fish story.