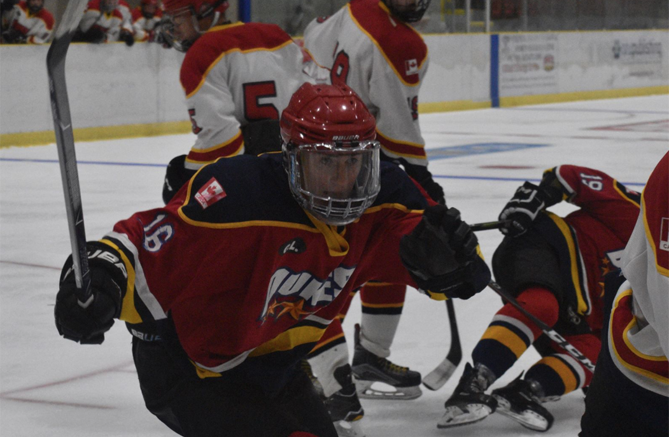 The Picton Pirates have once again tapped the local market for talent.

Dawson, a Picton native, played his Minor Midget season with the Greater Kingston Frontenacs AAA program in 2017-18 before returning to his Red Devils roots last season.

In 28 games for the Quinte Major Midgets, Dawson tallied five times while adding 11 helpers and picking up 44 penalty minutes.

In addition to this Eastern Triple A Hockey League season, Dawson found time to suit up for the Pirates in four call up games, picking up an assist in 5-3 loss on Dec. 20, 2018 to visiting Napanee. Picton bench boss Tyler Green said that experience in regular season action during the 2018-19 campaign as well as back-to-back standout springs with the Pirates spring prospects team was enough evidence for the club to offer a card to the 17 -year-old left winger.

“This is a very solid pick up for us. Nolan likes the physical play and can get dirty in the corners,” Green told the Gazette. “He’s very tough front of the net e are thrilled to have a player like Nolan commit to our team.”

In his four games as a Pirate last season, Green said Dawson brought high energy to each game he played to the point where Green found himself elevating the Picton native to the third line before the contest was over.

“ When he was in the lineup he brought the physicality we were missing and he was able to bring that jam albeit in a limited sample size,” Green added. “We are excited to see how he develops this season.”

When polled about the club’s prospect in net next season, Green said the team will be happy if playoff starter Kyle Renaud makes a Jr. A roster out of 2019 training camp.

“We feel we played an important role in his development last season and I know through speaking with him he was really happy with his season in Picton. He wants to play Jr. A this coming year and we obviously want the best for Kyle,” Green said. “That being said, if things don’t go his way, I’m sure he would be willing to come back for another season.”

Brennan Bush remains in the fold in terms of potential net minders for next season and Green said the club is examining prospects from minor hockey programs in Quinte and Kingston.

“There’s a lot at stake at the various Jr. A camps next month and we will be watching very closely,” the coach added.