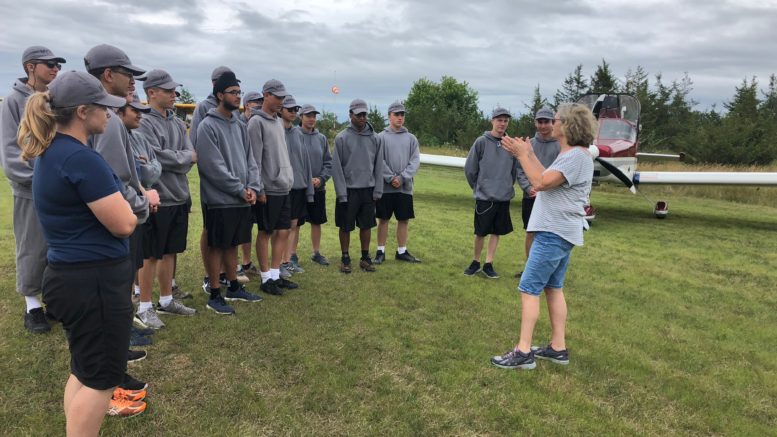 Members of the Prince Edward Flying Club once again lit the barbecue, put out all the fixings and welcomed as many as two dozen Royal Canadian Air Cadets to the club’s hanger Monday afternoon.

The Club, in existence since the early 1950’s, has been hosting an annual lunch for Cadets training at Picton Airport for the last half dozen years or so in order to build a bridge with the neophyte fliers they share runways with all summer.

Flying Club President Dave Main said the brief afternoon get-together was a way to formally introduce the two users of the Airport and enjoy a brief social occasion before the Cadets were hustled off to awaiting Schwiezier gliders.

“We have the cadets flying all day here at the Airport so we get to know them by way of the radio and we try to keep things operating smoothly,” Main told the Gazette.

Exactly which party had runway priority between the Club and the Mountain View Cadet Flying Training Centre (MVCFTC) school wasn’t always a crystal clear matter but since the club has been hosting these annual liaison lunches, Main said the Flying Club have had no issues between themselves and the Cadets.

From Monday to Saturday, the Cadet school will set up their take off and landing area based on wind conditions and forecasts but with three good runways to work with, those civilians flying into or out of Picton are almost never inconvenienced.

“We use one of the other runways so they can leave their equipment stationary and they’ve always said ‘If you want us to move off for a take off or landing, we will do that’ but because we have the three runways, it’s almost never an issue,” Main said. “We are very lucky to have this British Commonwealth Air Training Plan (BCATP) layout which ensures there’s almost always options whichever way the the wind blows.”

After a brief history lesson about the club and the airport, hungry students line up for a hot dog and a cold drink while members of both groups get aquatinted.

Main said these sessions with the bright young cadets are informative to both sides of the equation.

“This is a chance to meet cadets and discuss the general aviation side of things form the flying public’s perspective. Some of them might not have had any introduction or knowledge of this side of civilian aviation which we are part of just for the enjoyment of flying,” he added.

Commanding Officer Major James Lawson, of MVCFTC, formerly known as Central Region Gliding School said there are over 80 students from Ontario taking part in the the two courses offered by the Air Cadet flying program.

Students taking part in the MVCFTC  gliding school are hopeful to have their Transport Canada glider pilot’s licence as well as the Air Cadet issued wings by the end of the summer-long course.

Meanwhile in Windsor, Sudbury and London, three groups of cadets from all corners of Ontario  are working towards their Transport Canada’s private pilot’s licence and their power wings issued by the Air Cadets.

Major Lawson said whenever community organizations or groups like the Prince Edward Flying Club reach out and engage the Air Cadet program, it was a special occasion no matter how informal or casual the event is.

He added the history of the former No. 31 BCTAP Bombing and Gunnery School and stand in the same place of those young Canadians that came before was especially unique for these students.

“The Cadet program is a grass roots program that is structured nationally but relies a lot on the relationships we have with local communities to provide resources that are unique to each area,” Major Lawson told the Gazette. “To have this airfield is an excellent opportunity to discover and honour the history and the heritage that’s here and having the community’s support like this is a big bonus for us.”

The Commanding Officer said the historical aspects of CFB Mountain View and the former Camp Picton was provided to the visiting Cadets.

“Local history is impressed upon the Cadets during their time here and it’s certainly not lost on them, whether it’s the WWII BCATP field here or the Cold War-era installation at Mountain View which has been recently updated. I know our Cadets appreciate the history and infrastructure that went behind it,” Lawson said, adding that the former Camp Picton is one-of-a-kind when it comes to former WWII training installations.

“This is one of the very last in Canada where the majority of the structures are still standing and it remains impressive,” he added.

While a number of Cadet graduates will enter either the Forces or commercial airline work, the program instils  transferable skills that and equate to life in general and not exclusively the Canada’s military.

Cadet Communications officer Lt. Gillian Metcalfe added the program, among many functions, promotes a sense of community as well as citizenship and leadership.

“I know the Cadets feel welcomed by the Flying Club and members of the program appreciate these types of outreach efforts,” she added.