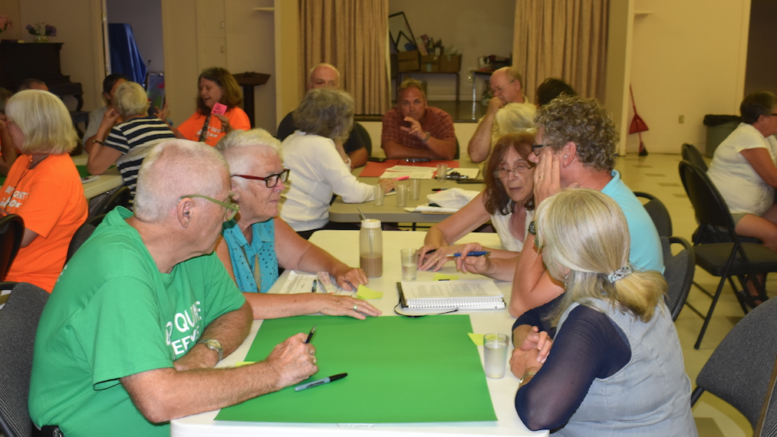 MANY MINDS ARE BETTER THAN ONE - Concerned citizens gathered at Picton United Church Tuesday to discuss the Green New Deal. (Sarah Williams/Gazette Staff)

Tuesday’s mid-summer heat did little to  hinder the enthusiasm of those attending the local meeting for a Green New Deal (GND) at Picton’s United Church.

Having launched on May 6, 2019, there have been over 150 meetings across Canada.

Denoting an emphasis on citizen participation, these meetings have been dubbed ‘Town Halls’ and according to Greenpeace, one of the GND’s main supporters, more than 7,000 people have joined this fledgling movement.

Approximately 30 attendees participated in the recent meeting in Picton, speaking to a constellation of issues that connect people from a local to a global level.

Described as providing solutions for a “100 per cent renewable and just future” Greenpeace has already collated some major themes seen across Canada during the town hall meetings.

Broadly speaking, these issues include, but are not limited to: converting to 100 per cent renewable energy by 2040, cutting down the use of single-use plastics, climate justice and creating one million green jobs.

There are several ways in which the GND proposes each of these goals be met, for example, by shifting fossil fuel subsidies to green initiatives, enshrining indigenous rights and banning all unnecessary single-use plastic items.

Co-organizer Julie Hobbs presented these findings at the beginning of the town hall meeting.

“These are very big themes but I feel confident that these kind of changes can be inspired by people working at the local level,” Hobbs said.

Speaking about a more specific concern was local resident Rosalind Adams who spoke to the importance of using the correct target numbers when working towards national emissions reductions.

Currently, the GND is moving forward with the notion that Canada must reduce carbon emissions in half by 2030. Based on recent IPCC research, global carbon emissions must also reduce by 50 per cent in order to impede the progress of climate change.

However  cutting Canada’s emissions in half in the next decade will not save a livable planet asserted Adams.

“There is a limit to the carbon dioxide emissions we can add to the atmosphere over the next decade without crashing the climate and lets not forget that within thirty years that limit is zero,” she stressed.

In fact, Adams argues that our current target is an unfair one, favouring developed countries such as Canada.

Considering emissions in North America vastly outpace those in the rest of the world, Adams stated the agreed upon 50 per cent emissions reductions target is unfair and favours more developed regions.

“The 50 per cent regulation would leave developed countries with far less than subsistence levels of fuel. This would exacerbate existing inequalities,” she stated.

Though solemn in nature, Adams’ speech provided food for thought as participants considered the ways in which they could reduce emissions on a local level as well as nationally.

“We’re trying to move it forward on a local level for now. The main players in the pact for a Green New Deal in Canada aren’t ready to move forward until after the election,” explained co-organizer Lori Northwick. “There’s a lot of issues around promoting something that could be thought to influence an election.”

Though there were initially several agencies that supported the GND, Greenpeace is the only one who wants the GND to move forward at this time.

In the meantime, and before the federal election, Julie Hobbs plans to share her findings from this recent town hall meeting with council.

“Keeping the conversation going around climate change and how we can get involved is so important. I think every time the community gathers and shares ideas, there’s a positive effect.”

The organizers are hopeful that, through this latest GND meeting, smaller groups will organize and mobilize around specific concerns, such as cutting down single-use plastics or lobbying for better public transportation.

Bell noted that many concerns she has seen locally through canvassing were also brought up at the meeting.

“Currently, we’re seeing a lot of discussion around affordable housing. It’s a huge issue here, along with Belleville and Quinte West,” Bell stated. “On top of that, electricity is really expensive and water bills are really high-we know that here in the County. It’s not possible for young people to get housing here. It’s not possible for seniors to stay here. Across the country these are huge issues and I think that the NDP is working towards changing that.”

Bell also stated the NDP Party of Canada supported the GND, having their own version called the New Deal for People-a deal that touches on many of the same concerns seen at the meeting in Picton Tuesday night.

“We think it’s a great, great idea,” Bell said, speaking of the GND. “We think that infrastructure, pharmacare, affordable housing and climate change are all interlinked issues and that social justice and climate change have to go hand-in-hand at this point.”

As with any great turmoil, the rising cost of living has no doubt provoked people to engage on a civic level in hopes they can affect change.

Perhaps this firmament will provide fuel to sustain us into a more just, livable future.