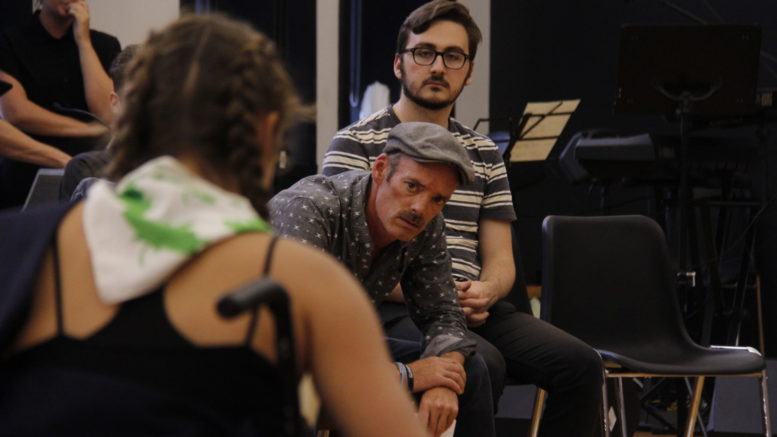 CUE THE CURTAIN Saturday night brought the first ever Cue the Night Theatre production to the newly renovated Armoury in The Mess Hall. In partnership, Shatterbox Theatre and the Prince Edward County Public Library Picton branch brought the fundraiser on to help finish the library expansion and future projects for Shatterbox. A short scene from Colleen Murphy's Armstrong's War was performed by Pat Larkin as Micheal Armstrong, a young soldier and Alice Graham as Halley Armstrong, a 12-year-old pathfinder. (Desirée Decoste/Gazette Staff)

In the newly renovated Armoury at The Mess Hall in Picton Saturday night it was all but quiet as the inaugural Cue The Night theatrical show cued up.

In turn, the new expansion at the Library will serve as home for future Shatterbox productions.

Georgia Papanicolaou, cofounder and artistic director of Shatterbox Theatre and Julie Lane, actress as well as IT coordinator at the Picton Public Library, worked in unison to bring their concept of an evening of music and live performance to life and feature everything to benefit two amazing causes. 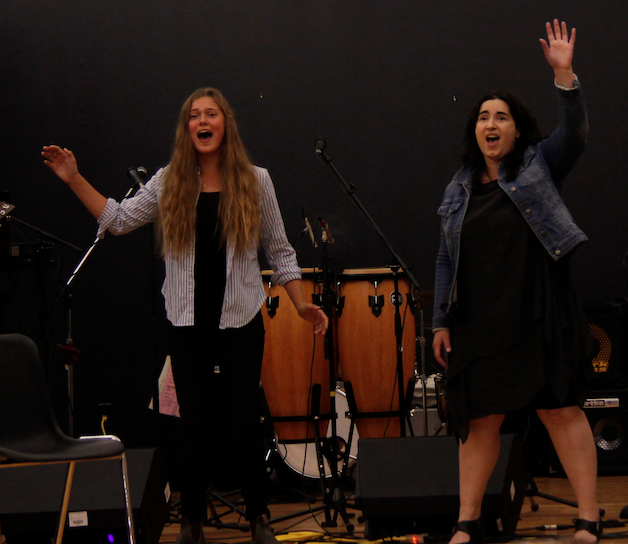 “This is a fundraiser for the Prince Edward County Public library and Shatterbox Theatre, both non-profits,” said Papanicolaou. “We partnered together this year which is absolutely incredible and we are hoping this is the first of many things we will do together.

Papanicolaou first met Lane when they teamed up to work on ‘A Night at the Museum‘.

“I volunteered to do some of the performance with her and I was really thrilled as to what this group were putting together as far as programming at the library and how they were raising funds for this great cause so I thought it would be a good opportunity for Shatterbox to partner with the Library,” Papanicolaou expressed. “Julie held this opportunity for us to do some workshops with students so we partnered up to do free musical theatre workshops and we thought ‘If we’re going to do that, lets do a fundraiser as well’ and that’s how Cue The Night came about.”

On Saturday night the performers floated  down the middle of the room as the audience enjoyed the different point of view set up on the outskirts of the space.

The evening consisted of different skits from past, present and future shows Shatterbox has or will be producing

To start the night off, a short but well played scene from Colleen Murphy’s ‘Armstrong’s War‘ was performed.

The play is about the fascinating encounter of an insistent and articulate 12-year-old pathfinder, Hailey Armstrong played by Alice Graham and a young soldier by the name Micheal Armstrong, played on Saturday by noted local thespian Pat Larkin.

Following the first performance was Fiona Dodsworth’s short piece from ‘Constellations‘ on how licking one’s elbows may hold the secret to immortality.

Robin Snip playing as Grace was next with a small but captivating excerpt from ‘The Small Room at the Top of the Stairs‘ along with Julie Lane, Fiona Dodsworth and Shelley Zebedee.

A short clip from ‘Art‘ which will be performed at The Local Store this September followed with Mickenzie Pearsoll and Roxanne McKenzie showing off  their skills with a small art discussion on how much one would pay for a white canvas painting. 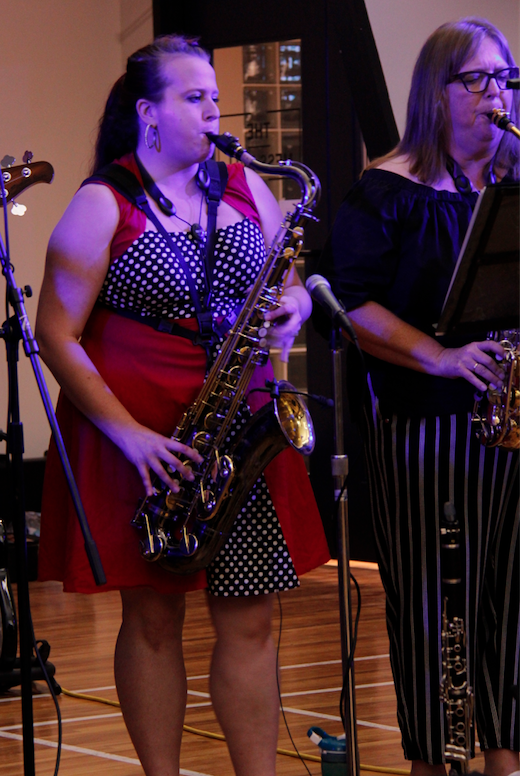 Jessica Yarrow (left) and Amanda Aman (right) from local band Cue the Funk played into the night as the party continued after the performances. (Desirée Decoste/Gazette Staff)

Pat Larkin returned with Jacob Dey and performed an enthralling prelude of the show ‘Red‘ which had the audience hanging on every word while the duo brought painter Mark Rothko’s talent to life.

The show will be performed at The Regent Theatre this September.

Papanicolaou announced at the end of the evening Shatterbox Theatre will be performing ‘Spring Awakening‘ in May 2020 after they performed a small glimpse of what will be. The play, originally written in 1891 is about youth and rebellion.

After the live performances were finished, the lights were dimmed, chairs were moved to the sides and the party was started as Cue the Funk played and patrons danced the night away.

“The Picton Branch Library has raised about $1.68 million of our $2 million goal,” said Head Librarian Barbara Sweet. “We feel once people see activity and shovels in the ground it, will help us reach our target.”

As a last big push, the Library is about to launch a new campaign called ‘Two for Two’ where they are going to raise the last $200,000 in the last two months.

For more information and to find out more about the ‘Time to Renew’ campaign,