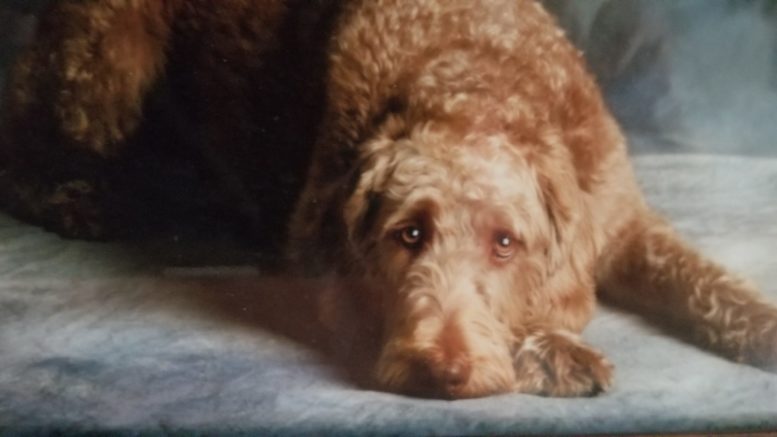 Noah, an 11 year old golden labradoodle that's helped his owner get back on his feet after a horrific car crash and was lost Canada Day weekend in Prince Edward County, is still being sought by a great number of local searchers. (Submitted Photo)

A copper brown labradoodle lost during the Canada Day weekend at a rental property in south Prince Edward County is out there in the wilds of this island.

His owner can feel it.

Toronto’s Craig Pitman is appealing to Prince Edward County residents to keep their eyes out for Noah, an 11  year-old copper brown labrador-poodle cross that served as a therapy dog in palliative situations at Toronto-area hospitals.

Pitman explained he was in a head-on car crash about 12 years ago that would claim the life of his dog that was travelling with him.

In the aftermath of the crash, Pitman spent time bed ridden and in wheel chairs before Noah came into his life.

“It took me a while to realize this but, upon reflection, he was doing for me what he was trained to do for others. He saved my life and got me back on track,” Pitman told the Gazette, “We have a unique relationship. He taught me the power of animal therapy, connectivity and I realize these are things people may not understand but I’ve felt it and lived it.”

Pitman and his family had visited Prince Edward County previously and decided to spend the Canada Day weekend here at a rental home on County Rd. 13.

With Canada Day brought fireworks at the shoreline of a nearby by property.

“The kids enjoyed it and we really didn’t think much of it at the time,” Pitman said.

After the show was done, the family returned to their nearby accommodations and noticed their three dogs which had been outside during the show had vanished.

The family searched until the wee hours of the morning. One animal was located in the early morning hours at Little Bluff while another returned on their own.

“Later the next morning, it started to started to hit me between the eyes that Noah was gone,” Pitman said.

What happened in the subsequent days was the epitome of dedication and the slow rallying of the local community.

Pitman spent 18 days searching for Noah along the roadways from County Rd. 13 to Black River over to Waupoos, erecting signs, talking to residents and desperately searching for his close companion.

“A switch has been flipped in Noah and he’s gone into ‘flight or fight’ mode and he’s become a feral animal. I’ve been close to him multiple times but to no avail,” Pitman said. “For three weeks I was living off the hospitality and graciousness of County folks, camping on front lawns and sleeping in my car. Eventually someone gave us a cottage to use for a while.

For Pitman, the silver lining has been the genuine concern he’s seen from scores of  local residents who have taken their own time to drive around the south eastern part of Prince Edward County to see if they can’t get a glimpse of the deeply valued golden labradoodle that’s been instrumental in the Toronto resident’s recovery.

“It’s heart warming and overwhelming and it’s not what I anticipated at all. I can’t believe how people have been so vigilant, hundreds of people that are mobilized and would activate if need be,” Pitman said.

There’s been multiple sightings of Noah along County Rd. 13, Black River and even a sighting on County Rd. 49.

Pitman is further appealing to the public to contact him if they happen to see Noah.

“If you see him you should stay calm, keep low to the ground, keep your eyes on him and call me at 647-963-8778. I think Noah is trying to get off the island by following water and hoping to find his way home.

Pitman said there’s something very unique about this story and he’s at a loss to explain why people in a far off community have clamoured the way the have, coming forward to help in this search.

A dedicated social media group www.facebook.com/groups/LookForNoah  has nearly 200 members trading information and reporting up to the minute sightings.

“I guess there’s something unique about Noah, my vigilance and dedication in finding him that has pulled people from Prince Edward County in. He’s not just a dog and he means so much to me and my family.