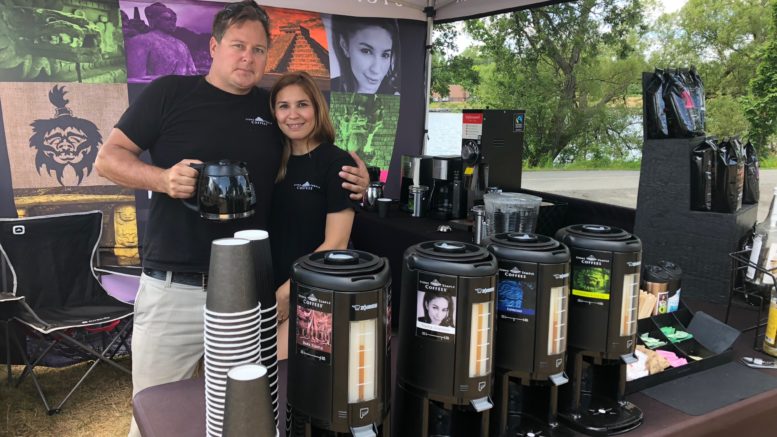 BREW CREW- Ryan and Saudy Saunders of Stone Temple Coffees based on East Lake have been bringing their popular brewed coffee to festivals in the Quinte area this summer including the 2019 Waterfront Festival at Zwick's Park. (Jason Parks/Gazette Staff)

A Prince Edward County native and his Honduran bride are in the process of ramping up a coffee company currently based in Athol ward but with an eye for expansion thanks in part to the early gains of Stone Temple Coffees.

Ryan Saunders, an East Lake native, and his wife Saudy are bringing premium certified Fair-trade/Organic coffee from around the world to doorsteps of java drinkers in Prince Edward County, the Quinte area and well beyond.

Their efforts have already drawn praise as their ’Shrunken Head’ South American blend was recognized with a Golden Cup of Excellence in the artisanal category at the recent 2019 Toronto Coffee & Tea Expo.

Saunders, a former carpenter by trade and later a licensed scuba diving instructor whose career travels took him to the Cayman Islands, St. Thomas U.S.V.I., Puerto Rico and finally the island of Roatan (about 65 km of the northern coast of Honduras) was working as instructor in the south Caribbean Sea when he started to branch out and get involved with marketing local libations and eventually coffee.

“I was doing the scuba diving thing but I met this friend who made this amazing cashew wine product who lived on the mainland,” Saunders explained. “It was such a great product with great marketing potential but it needed branding.”

The Stone Temple brand got its start with a product that used the cashew fruit that holds the nut, similar to a crab apple, and, after the fermentation process, leaves a light yellow drink extremely popular in Belize and other countries in the northern part of South America.

In the beginning, Saunders was delivering cases of wine to grocery stores and restaurants all over the island by way of taxi. Other products made from lychee fruit and other tropical produce were added to a growing lineup as did artisan soaps.

Next, coffee lines from all the growing regions in Honduras were developed. However, as anyone who has done business abroad will tell you, operational pitfalls can be exacerbated significantly in far off places.

“I ended up shutting the business down,” Saunders said. “I had 3-4 large customers that weren’t paying on time, I had employee theft to deal with, vehicles breaking down. There were a lot of good things happening but, at the same time, bad things were happening.”

With 2,000 dives under his belt, Saunders came back to Prince Edward County to start a new chapter of his life and went back into carpentry but his love of marketing and developing interesting products kept him wondering if there was a way to take the knowledge he had gained in Roatan and bring it to Canada.

“I really wanted to get back to working for myself and find a way to bring Stone Temple Coffee into Canada,” Saunders said.

The second most traded commodity in the world, Saunders started sourcing Faritrade/Organic coffee beans from all around the world in order to develop both single origin and in-house blend lines.

It took a year for the germination of 13 different roasts in two different profiles (ground and whole bean) to grow ready for market.

Beans from Columbia, Ethiopia, Indonesia, Honduras, Peru and Mexico to name a few, are part of the Stone Temple Coffee lineup and all come with unique names such as Temple Goddess, Shrunken Head or Aztec Ritual.

Now available Canada-wide through Amazon.ca and soon internationally through the United States version of the online super seller, one of the first places Stone Temple Coffee was available was the Store in Cherry Valley, just a few kilometres from the company’s headquarters.

“I have to give Karol Dulmanis of the Store in Cherry Valley a ton of credit, she’s been so inspirational and positive in this short journey so far,” Saunders said. “Another big promoter and incubator to local products is Penny’s Pantry in Picton. They’ve both been wonderful.”

Also available at the County Yum Club in downtown Picton as well as the complimentary coffee of choice for Cribs on East Lake accommodations, Ryan and Saudy have been fixtures at local and regional festivals, events and farmers markets in the Quinte area and beyond.

Ryan’s father Ross has also been a massive help with the startup, whom enjoys brewing and socializing at events.

The recent Waterfront Festival in Belleville and this weekend’s Voodoo Rockfest in Napanee are just a couple of the events that have had coffee drinkers lining up for a cup of this new brew.

“It’s been a lot of fun connecting with coffee drinkers both here in the county and all over the area and we are very successful wherever we go, Saunders said. In addition to online sales, a coffee distributor will be bringing Stone Temple Coffee to independent speciality stores from Toronto to Montreal starting mid August.

All lines and varieties that have been processed, ground, blended and packaged at their certified Fair-Trade/Organic facility on East Lake.

“We’ve outgrown our space so we are definitely on the hunt for a larger facility with all options on the table for us. We are hoping that more local businesses will reach out to us. We have a product here that all our customers want and we want to make it more convenient for them to purchase” Saunders added.

In terms of drinkability, Saunders said there has been very little if any negative feedback from coffee drinkers.

“Everyone seems to find our blends smooth with no bitter aftertaste,” Saunders added. “People who have given us a chance really love it and there’s a definite following now.”

The President of the company admits that Pink Donkey Decaf, Shrunken Head and Temple Goddess aren’t exactly the names of blends you might find at the local grocery stores but Saunders is willing to wait and grow grass roots support of the Stone Temple Coffee lines.

“Obviously we want to be in as many stores as possible but it’s all about baby steps right now and building a great quality product that people enjoy,” he said. “I believe more and more people are waking up to Stone Temple Coffees and really getting behind what we have to offer.”