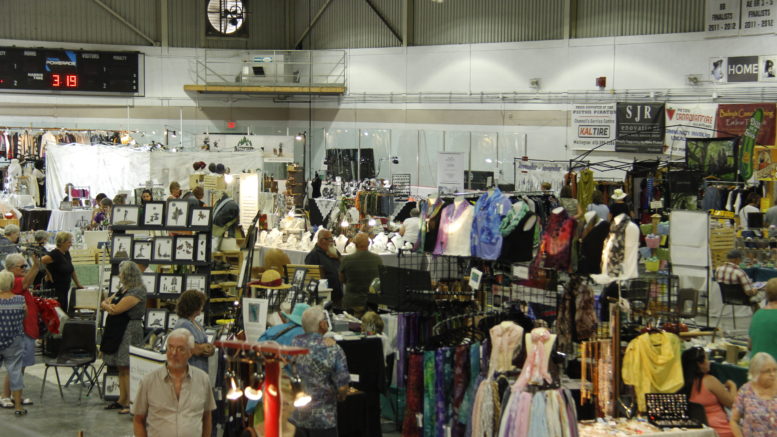 The excitement at Thursday’s annual Women’s Institute Art & Craft Sale was palpable. The hustle and bustle could be seen as attendees manoeuvred their way from the Crystal Palace to the Community Centre and all the grounds between.

Many newcomers and familiar faces could be seen.

Formed in 1908 with a mandate to help ‘home and country’, the Prince Edward County Women’s Institute contains several local community branches and has been hosting the popular event for 36 years.

The Women’s Institute Art & Craft Sale is entirely volunteer run and one such volunteer is Kim De Bruin, who when she wasn’t busy preparing very reaonsable priced, fresh food for attendees at the WI lunch counter, took a few moments to speak with the Gazette.

De Bruin is quick to note she only recently fell into role of Public Relations Officer and is tasked with trying to fill the shoes of previous PR Officer, Wilma de Wolde.

Though their goal of achieving accessible transportation for seniors in need was eventually met, they are still committed to maintaining that transportation.

“We have a commitment with them over a five year period. We’re committed to$5,000 annually,” explained De Bruin.

De Bruin also explains apart from accessible transportation, there are a variety of causes to which the WI donate. 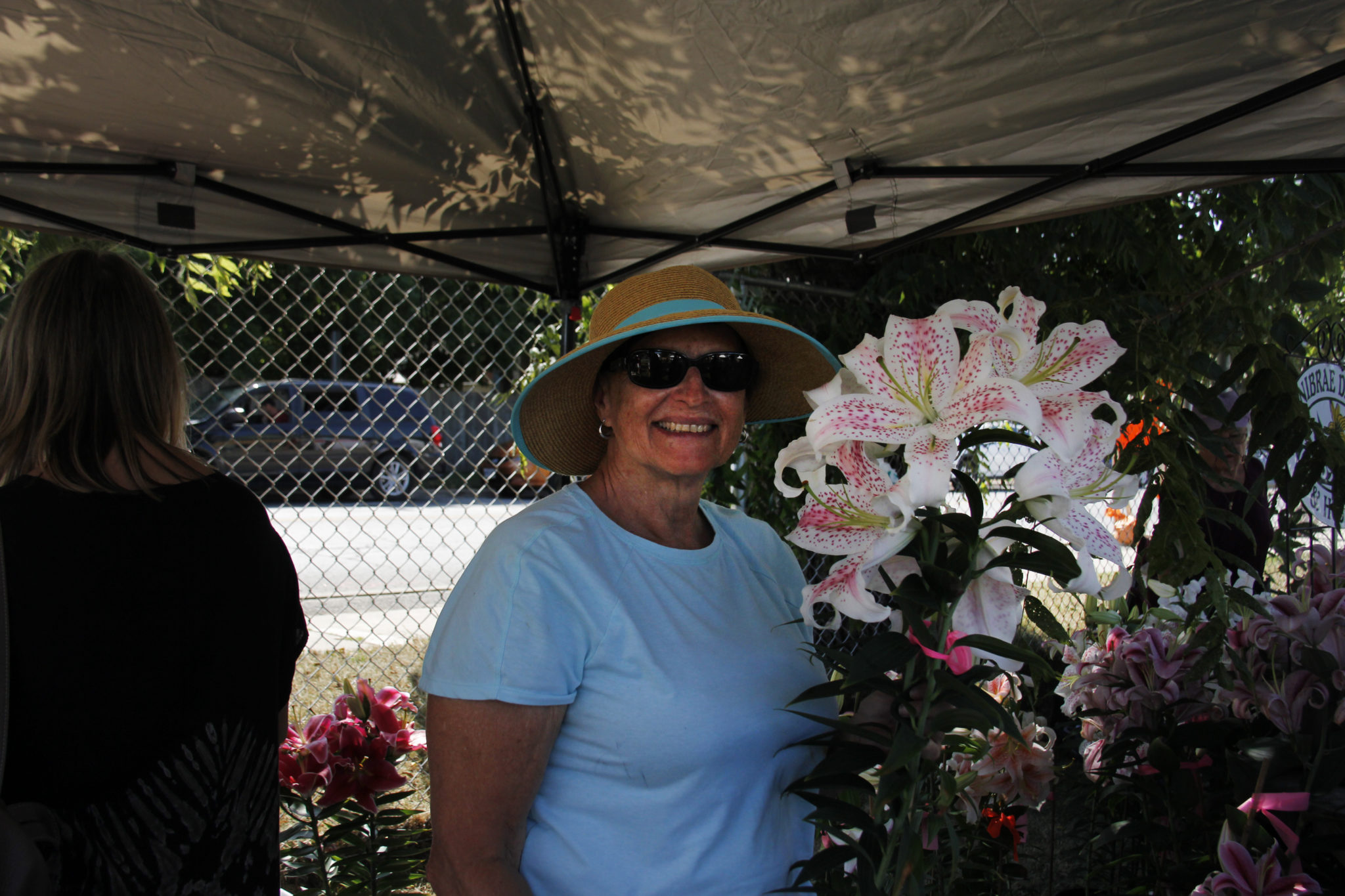 De Bruin also notes this craft sale and show has grown quite large, with close to 4,000 people attending in 2018 and vendors that travel from Montreal to Manitoba and places in between to attend the show and sale.

Organizers were expecting to meet or exceed their 2018 attendance numbers.

Her booth exhibits a range of jewellery from pendants to earrings, each with artfully made silver settings containing either gemstones or amber.

Madej also took a moment to speak with the Gazette.

“I’ve been making this jewellery for 42 years. 30 years in my native Poland. Then, I moved to Canada and moved my profession,” said Madej, who is now based in Oakville.

“I come here looking for different customers,” she said, through a strong Polish accent. “There’s lots of fashion jewellery and not too much very original hand-made jewellery. There’s a lot of artificial  stuff.”

Pointing to her audacious display of Amber jewellery, she adds, “Amber, this is natural” and Madej notes she does all the silver settings herself with the aim to appeal to those who are looking for something a little bit different.

“In this area, there are a lot of people looking for different designs-different styles,” adds Madej.

Mylene Trepanier of Creations D’Octobre came all the way from the Laurentians to showcase her work at the annual craft show and sale. 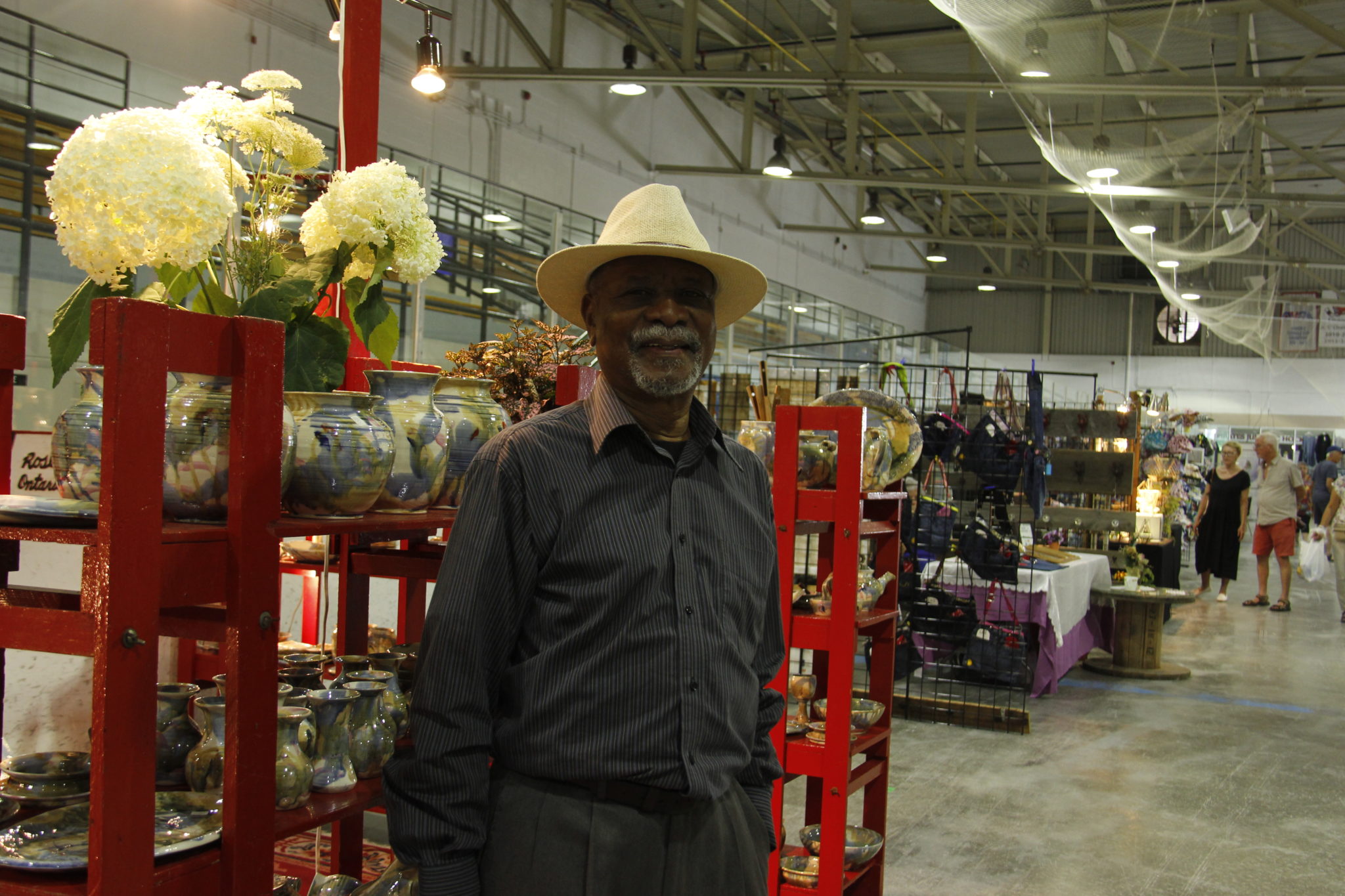 FROM DAY ONE – Jeph Bailey-Brown of Bailey-Brown Pottery in Roslin has been participating in the event since it’s inception 36 years ago. (Desiree Decoste/Gazette Staff)

Displaying a variety of quirky and quaint wall art pieces, her works display a range of colours and textures, giving them an almost 3D effect

“This wall art is made out of wood, I use old barn wood to make it. It’s all wood cut out and I do the texture with acrylic paint on top,” explains Trepanier, adding, “I augment it with old metal pieces, sometimes old chandeliers. I like to find my pieces here and there.”

“We’ve been coming to this show the past ten years. We build up clientele year by year in the Picton area,” adds Trepanier, explaining that she enjoys showcasing her new products to both new and returning clientele.

Though there are many who travel to showcase their wares at the WI Craft Show and Sale, there are also some who are from the County themselves.

Maggie Goode of Boniebrae daylilies and hostas is one such person. And for anyone who has attended the show and sale within the past two decades, it would be nearly impossible to avoid the sweet scent of Oriental lilies wafting across the grounds from Goode’s booth.

“We’ve been attending the craft sale for 20 years,” said Goode. “We come back mainly because it’s really good advertising for our garden centre at our home on Matthie Road.”

Goode also explains that for those attend the show and sale from far away, this gives them a chance to purchase the flowers that would otherwise be available at their garden centre.

“My husband is probably the top Daylily hybridizer in North America. He travels in the winter speaking about daylilies in the U.S.,” states Goode.

Apart from the Daylilies on display there were a variety of Hostas as well as ever-fragrant Oriental Lilies.

Speaking as to why she and her husband focus on Daylilies, Goode states that it’s mostly a marriage of practicality and pleasure.

“They thrive on neglect. These flowers love full sun,” she adds.

Jeph Bailey-Brown of Bailey-Brown Pottery has been selling his and his wife Pam’s pieces at the Art and Craft sale since day one.

“I do like the organizers, their nice and pleasant ladies,” Bailey-Brown told The Gazette. “They would bend over backwards to make you feel comfortable.”

An original vendor from the show’s inception, Some of Bailey-Brown’s pieces involve natural items such as pressed rhubarb leaves and other such things formed into clay that produce different designs.

In the early days,  there were only tables to display works and pieces and the show only took a small place in the arena.