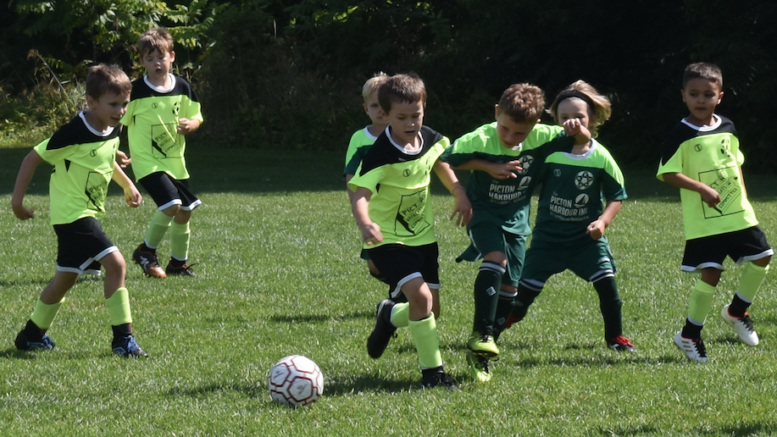 THE BATTLE OF PICTON- Members of the Picton Recreation Committee and Picton Harbour Inn face off in the U7 Semifinals of the Gary Parks 2019 PECSA Soccer Tournament on Sunday. (Jason Parks/Gazette Staff)

It just seems like yesterday when, in the spring  of 1999, organizers started to bring together a local grass roots house league that was one team and was supported by the Belleville Soccer Association. 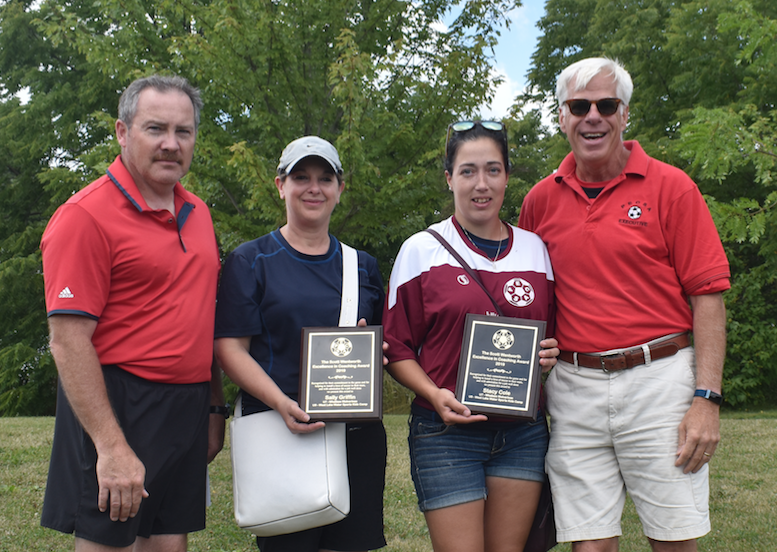 Since that time, thousands of players, hundreds of volunteer coaches and scores of community-minded volunteers have been a part of the ongoing PECSA success story.

From Timbits to U18, the beautiful game has evolved into the summer sport of choice for Prince Edward County youth and PECSA Officials commemorated two decades on Saturday as the tournament broke for a quick lunch break.

While the ultimate goal of any youth sports league is fun and development, Wentworth also spoke of the way PECSA has been able to bind the community together and allow for family and friends to connect on a pleasant summer evening.

“It’s a real sense of community, anyone who has been here on a busy night or on the tournament weekend knows this place becomes a community hub,” Wentworth said of the legacy of PECSA. 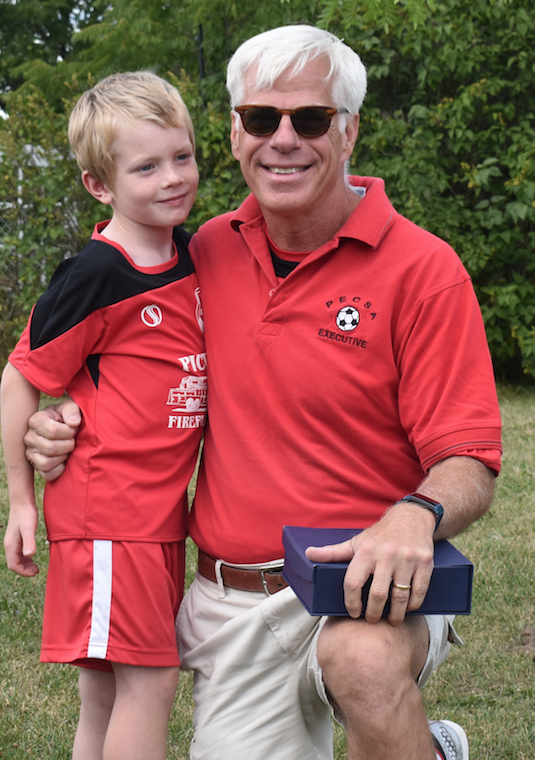 Eli King presents his grandfather Scott Wentworth with a special award after the longtime PECSA volunteer coached his 1,000th game in the local association on Saturday. (Jason Parks/Gazette Staff)

“We see the happiness of players, parents, family, friends all celebrating the things that come with participating in a team sport. We see the building of self confidence, skills development and being a part of team and something outside of one’s self. Those lessons are bigger than the game.”

In attendance, Wentworth pointed to Parks as one of the leading early executive members that helped foster the Association into the success story it is today and harkened back to 2006 when the efforts of the executive and collaboration with the County of Prince Edward paid off with the creation of the Johnson St. multi-pitch complex, a level playing area with playing surfaces for all age divisions.

Wentworth spoke of the late Charlene inch’s positive contributions to PECSA that helped for the betterment of the organization and the fun, sunny disposition she displayed as part of the volunteer body.

“To memorialize Charlene and her efforts with PECSA, we are planting this sunburst honey locust tree and what better way to remember her sunny disposition joie de vive than with this tree,” Wentworth said.

As part of the regular festivities, the break allowed the executive to hand out the annual Scott Wentworth Coach of the Year award for 2019.

For a second time in her coaching career, volunteer coach Stacey Cole was selected as PECSA’s best skipper along with her co-coach Sally Griffin.

Cole and Griffin both coached the U7 Whattam Wolverines and the U9 West Lake Water Sports Kids Camp entries.

“Stacey and Sally epitomize what it means to be volunteer coaches, they are always about the kids, “ Wentworth said “The players and parents on their teams will attest, these coaches use soccer as a vehicle for teaching life lessons.”

Fellow executive member Ron Stakes took a moment after the Coach of the Year presentation  to single out Wentworth who, according to calculations undertaken by PECSA, coached his 1,000 game in the youth soccer league on Saturday morning.

“It’s been an honour, I see many players out here today, it’s been a pleasure being involved with this organization,” Wentworth said. 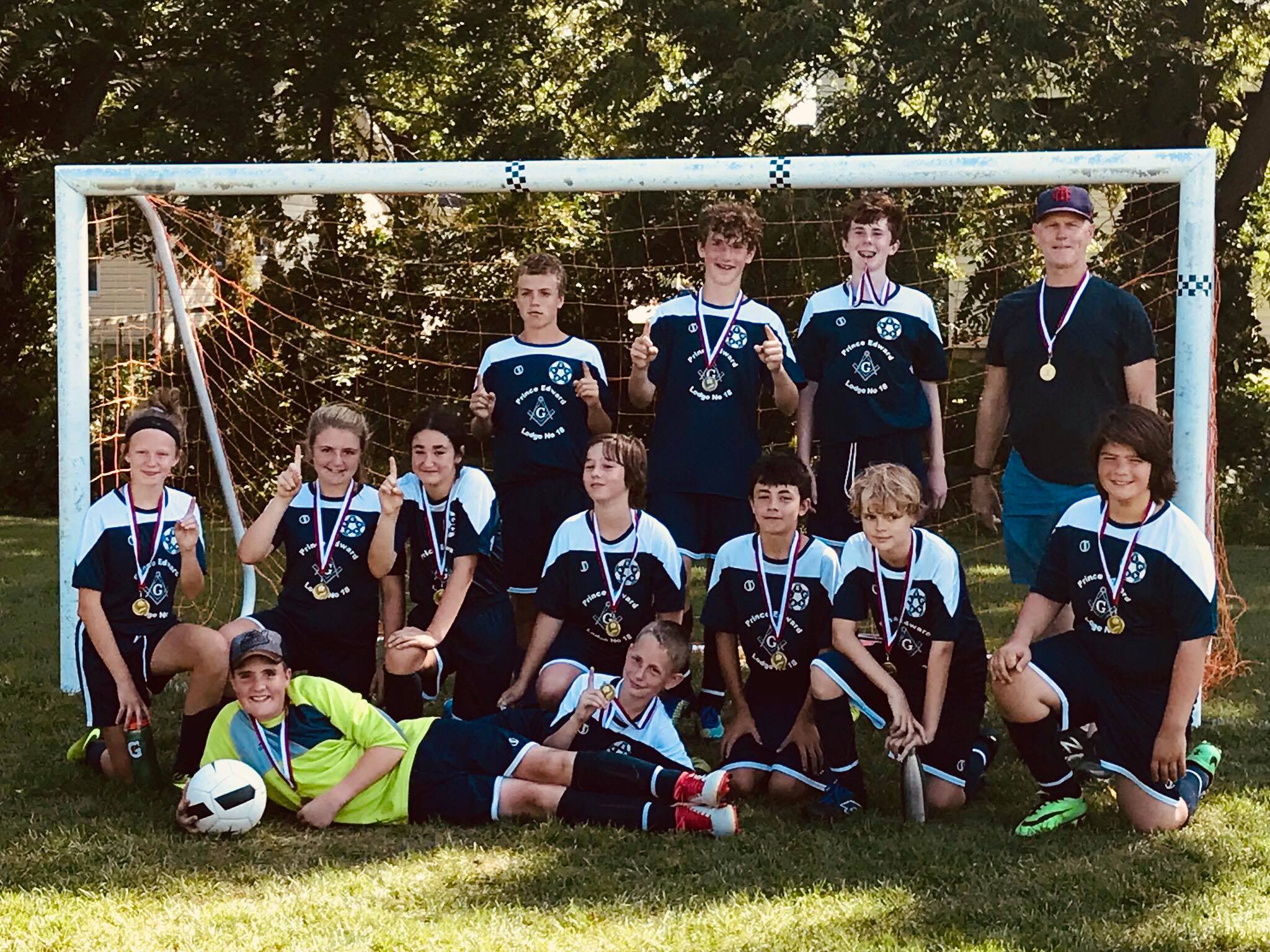 Stakes added the Kinsman Club of Picton were to be thanked for cooking 600 plus hot dogs for each player on Saturday.

In terms of results this weekend, a number of age divisions came down to the last seconds of play and, in some cases, required shootouts in order to determine a victor.

All 8 Tim Horton’s Timbits U5 teams each played two games on Saturday to wrap up their season.

Tied 3-3 at the end of regulation and overtime. Books & Company defeated Reynolds Trucking in a shootout.