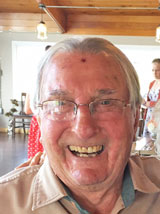 Surrounded by his daughters and their families (and one day before his 90th birthday), Gord Bevan passed peacefully on Tuesday August 6th, 2019, at Belleville General Hospital. Beloved husband of Vera (nee Stones), and deeply loved father of Jane (Eric) and Sarah (Andrew). Sadly missed by his grandchildren, Erik Jakobsen (Cassie), Sofia, Lindsay, Grace, Victoria, Emily and great grandson Lane. Missed by many nieces and nephews in England, Wales and Spain. He will be remembered by many for his life-long love of gardening, wine making and his wicked sense of humour! His early years were spent travelling the globe. He spent time in the United Kingdom, Middle East, Bogota, Malta, Australia, India, Japan, Manitoba, Brampton and British Columbia. In retirement, he settled with his wife in Prince Edward County. Gord spent 22 years in the British Royal Navy as an Aircraft Engineer and Chief Petty Officer. After leaving the navy, he was able to extend his passion of fixing aircraft engines, working for airlines such as British Airways, Air Canada and Canada 3000. Once retired, he moved from British Columbia to Ontario be closer to family. Gord was a huge advocate of organ and full body donation to assist others and to advance medical science. He continuously joked that he was going to make it into University one way or another. As such, we are honouring his wishes, and Gord has been accepted into the fall semester at Queen’s University School of Anatomy. We believe he will come out with high honours! A celebration of his life was held in his home and english garden, 32 Wellington Street, Bloomfield, ON, on Friday, August 9th. Tributes by his daughters and grandchildren and many stories were shared with friends over a glass of his home-made wine or a cup of tea. Arrangements entrusted to Hicks Funeral,  2 Centre Street, Picton. 613-476-5571 www.hicksfuneralhome.ca