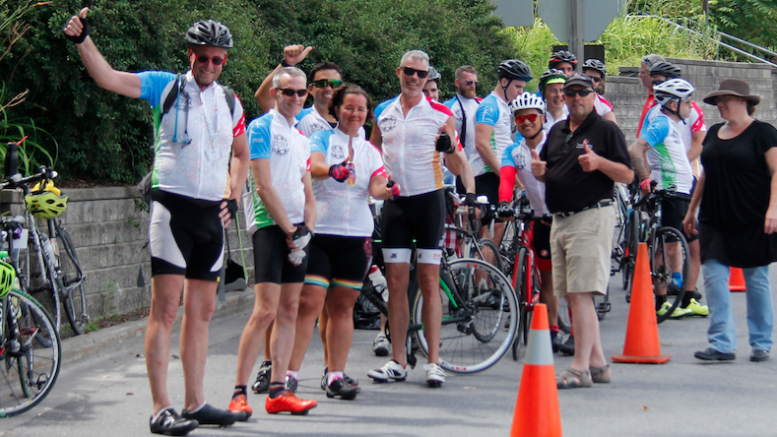 The Friends for Life Bike Rally left Toronto Sunday with about 200 cyclists, 100 crew members, and a fundraising goal of $1.4 million. The Bike Rally becomes a small, travelling town on wheels, cycling more than 600 km along the shore of Lake Ontario and the St. Lawrence, with a planned arrival in Montréal tomorrow afternoon.

The Bike Rally began in 1999 as an emergency response by two Toronto friends for their friends, and remains a grassroots, volunteer-driven fundraiser to this day.

The Bike Rally has grown to become the sustaining fundraiser for PWA, allowing the foundation to continue providing critical, life-saving, and enriching care for more than 2,900 people living with or impacted by HIV/AIDS every year.

The largest AIDS fundraiser if its kind in Canada, the annual Friends for Life Bike Rally has raised more than $16 million for the foundation over its history.

As has been the practice for several years, municipal leaders of the day greet cyclists at the Glenora Ferry docks as the Friends for Life participants wait to cross, and hand them a cold bottle of water as they enjoy a short boat ride to Adolphus Reach portion of their journey.

County of Prince Edward Mayor Steve Ferguson has taken part in the annual gathering of members of the horseshoe both as a councillor and now as mayor. 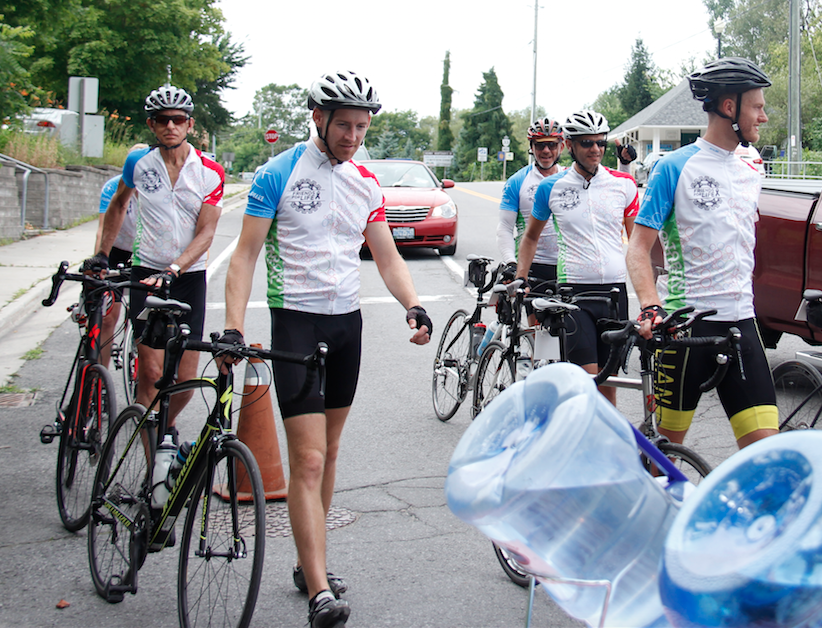 YOU’VE GOT A FRIEND Friends for Life cyclists voiced their appreciation while the Mayor and Council showed their support by staffing a water station at the Glenora Ferry station. (Desirée Decoste/Gazette Staff)

“I think it’s important we recognize the devastating effect aids has had on society,” Mayor Steve Ferguson told The Gazette. “If it helps these cyclists and makes their voyage or their trip a little bit more manageable, I think that’s a very small contribution to enable the participants to continue to participate in the rally and generate funds that will be used to support people with AIDS.”

The six day event began in Toronto with stops in Port Hope, Adolphustown, Kingston, Johnstown and Lancaster, ending in Montreal on Friday.

Local cycling enthusiast Jeff Holler has taken part in the Friends for Life Tour previously and was volunteering in support of riders in 2019.

“As far as I know I am the only county resident that’s done this ride,” County native Jeff Holler stated. “I like cycling as I’ve cycled all my life and about 14 years ago, I seen them (Bike Rally participants) at the liquor store one night and I asked them what the ride was all about. The following year I fundraised and took part in it.”

Packs of Friends for Life cyclists voiced their appreciation for the Mayor and Council at the ferry for what was undoubtedly the easiest kilometre in their 600 km trek.

“I ride for multiple reasons-first for the cause. I think in the fight against HIV and AIDS we tend to forget about individuals and the foundation (PWA) does just that, it cares for people and provides them with the resources they need to have their medication and it also provides food,” said Christian Roy, participant in the rally. “The second part would be the community, I guess doing all this, the riding brings out all the emotions and you create bonds and in the end is this big family that is-Friends for Life Bike Rally.”

As described on the Toronto PWA website, Friends for Life is so much more than a bike rally.

Funds raised through the Bike Rally ensure that people living with HIV/AIDS get access to programs and services that nourish their whole self in a welcoming and healing space.

“I would say I came for the cause and stayed for the community,” added Roy

The funds raised through the Bike Rally help provide a safe place to express those concerns and a place where practical information and support services are available.

“This community is a group of people I might not have had the chance to meet otherwise because everyone is so diverse and different ages and fitness levels,” Peter Harte said. “I had not fundraised for anything before this ride and I was looking to give back to my community and so it made sense.”