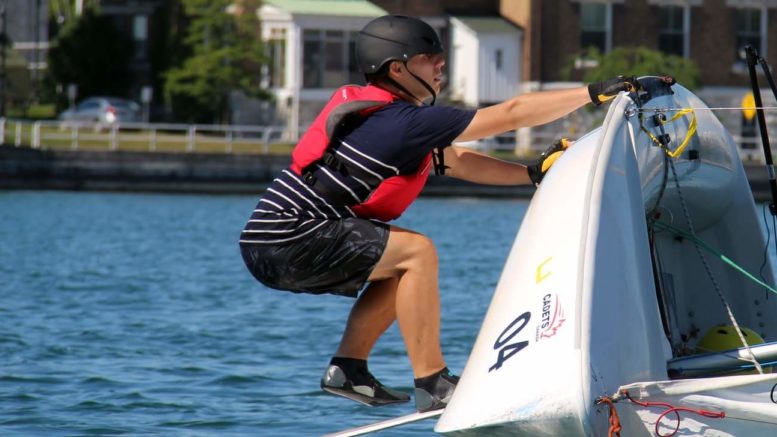 UP AND OVER Picton’s Matthew Tootle completes a training exercise during Sea Cadet training earlier this year. Tootle is taking part in the 2019 Sea Cadet national regatta next week. (Hailey Kendall/For the Gazette)

A Picton resident is leading a historic crew that will be competing in the 2019 Sea Cadet National Regatta in Kingston next week.

Matthew Tootle, a student at Bayside Secondary School in the French Immersion program, placed fourth in the Ontario Sea Cadet provincial championships in mid-June.  That result ensured that a two-person crew from the 58 Quinte Royal Canadian Sea Cadet Corps stationed in Belleville will compete at the national level for the first time in a dozen years.

Tootle was preparing to compete in the C420 class at this year’s Canadian Olympic Regatta Kingston (CORK) International & Sail Canada Youth Championships at Portsmouth in the Limestone City on Tuesday when contacted by the Gazette.

Tootle, 15, has been sailing since the tender age of 8 and is a graduate of the Prince Edward Yacht Club Jr. Sailing School where he earned his Cansail four. A love of open water and wind-powered craft has clearly developed between the County resident and the sport of sailing.

“I love how sailing is an extension of your body,” Tootle said. “You are out there on the water harnessing the power of the wind and the waves and you can feel with you body what the boat wants to do.”

Being involved with the 58 Corps has allowed Tootle to take the love of his favourite past time to a new level.

“They offer a great naval education and the equipment they have is often better than what you find at the yacht clubs because its all federally funded,” he added.

Tootle was asked to skipper a Corps 58 entry at the age of 12.

When he’s not skippering a C420 in the waters of Lake Ontario, Tootle can be found sailing solo aboard his Laser at the Waupoos Marina.

After teaming up with teammate Daniel Park of Toronto this week at CORK, Tootle will be joined with fellow sea cadet and Belleville native Owen Leduc. In both events, Tootle is skipper of the boat.

“We are really excited to be the first team in 12 years from the 58 to be competing at a National regatta,” Tootle said. “It’s a definite honour to represent the Corps at the national level.”