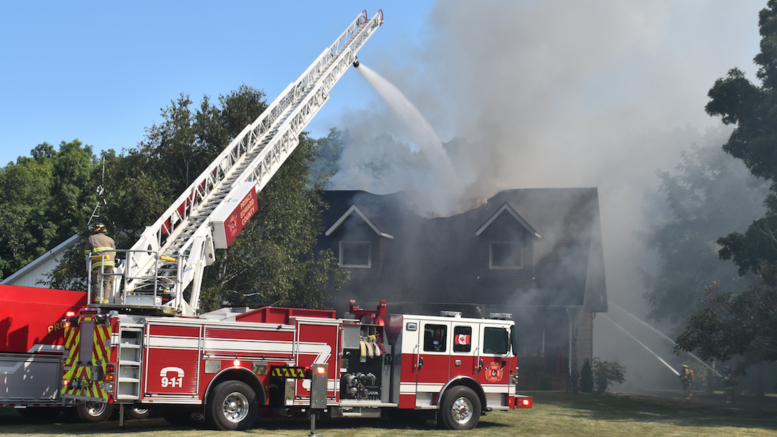 Two passers by that noticed strange smoke emanating from the rear of a house on Gilead Rd. On Thursday afternoon are being credited with saving a pair of lives thanks to to their quick thinking and appropriate actions.

A fire of an undetermined cause has razed a home at 313 Gilead Rd Thursday but a lone male occupant who was sleeping at the time and a canine are alive thanks to Brad Osborne and Greg Yaworski.

The two work at Nash Home Hardware in Wellington and had just finished making a delivery of an appliance in Picton. 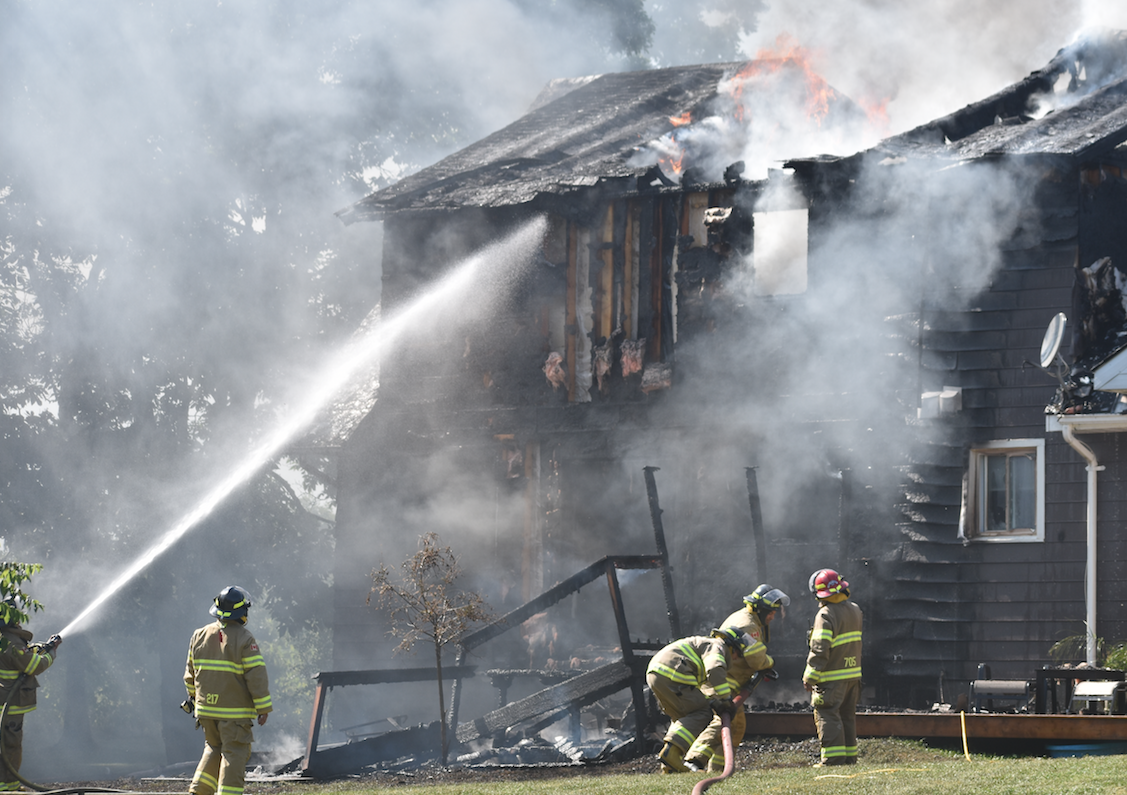 SMOKE AND WATER- Prince Edward County Fire and Rescue crews battle a blaze on Gilead Rd. Thursday afternoon. A lone occupant and a dog were saved thanks to the quick thinking and actions of two delivery truck drivers. (Jason Parks/ Gazette Staff)

Returning to the warehouse located on the outskirts of the village via Gilead Rd., they came upon a peculiar sight less than one kilometre west of the Hwy. 62 intersection. 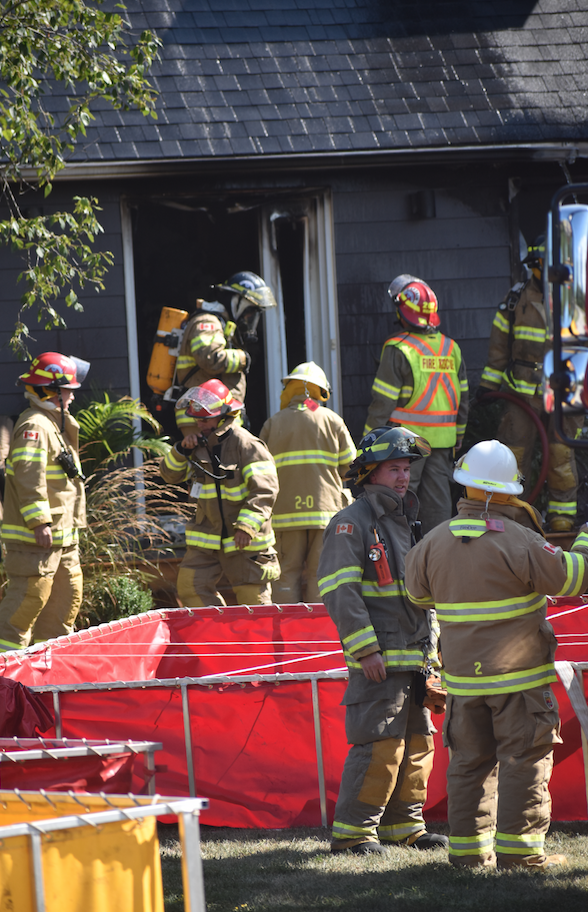 “We saw some smoke really building up at the rear of the house and you could hear the snaps, crackles and pops,” Osborne told the Gazette Thursday afternoon. “We could hear that from the road and you could tell right away it wasn’t a campfire or someone burning some brush.

“It was way too close to the house,” Yaworski added while local firefighters worked to bring the blaze under control.

The pair turned around, left their delivery vehicle in a hurry and went to check on what they were almost certain was an unreported house fire.

“We heard a really loud hiss and it might have been the propane tank at the back of the house going off,” Yaworski added

Yaworski ran to the back and yelled for Osborne to call 911 because the entire rear deck was on fire.

“Greg opened the door and the dog went running out and he started yelling for anyone in the house,” Osborne recalled. “Sure enough, there was a person sleeping in the loft above the garage.”

Once the occupant and the dog were out of the house safely, Yaworski tried to the fight the fire while Osborne relayed information to a 911 dispatcher who made the fire call which brought firefighters from Division Two Hallowell and Division Seven Wellington as well as tanker assist and the areal apparatus from Division One in Picton.

“I went back around and grabbed the garden house to try and fight it but it was too late, the siding was melting and starting to ignite and you just couldn’t get near it,’ Yaworski said.

Prince Edward County Fire and Rescue Chief Scott Manlow praised the efforts of Osborne and Yaworski as their vigilant actions and quick thinking quite likely saved a human life on Thursday.

“That was a great job by both of them to clear the house in a quick amount of time and phone in the fire call  within seconds,” Manlow told the Gazette Monday.

Manlow said damages were figured at $500,000 and the site of origin was the rear deck area although Prince Edward County Fire and Rescue investigators ruling the cause of the fire as undetermined at this point.

Manlow added the fire was not suspicious in nature and over 30 firefighters attended the scene.

Both tankers from Picton and Wellington serviced the aerial truck which was utilized to attack the fire from the roof  while firefighters manned hoses at the rear and side of the home and battled the fire from those locations.

“It was great to be able to have both divisions coming from opposite directions and having them both pulling water from different systems to serve the aerial truck really offsets the draw,” Manlow added. “We went into containment mode at one point but then we were able to attack the fire and really knock it down.”