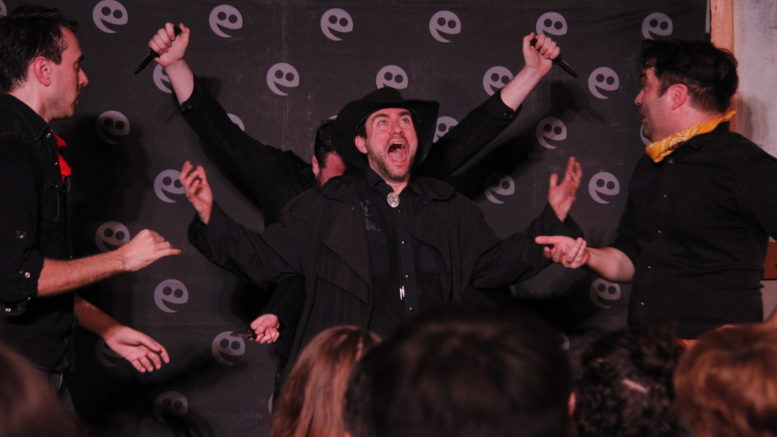 Normally a quiet and reserved venue, the Athol Town Hall was all but quiet when artisanal comedy troupe Taste That! and Toronto sketchfest best of the fest winners Sex T-Rex took the stage.

The community gathering place was filled with laughter as both acts had upwards of 100 comedy fans roaring. From Taste That’s hilarious improv skills to Sex T-Rex’s scripted, outstanding performance of ‘Watch out WildKat’, everyone seemed to forget the tight quarters and focus on what they came for. 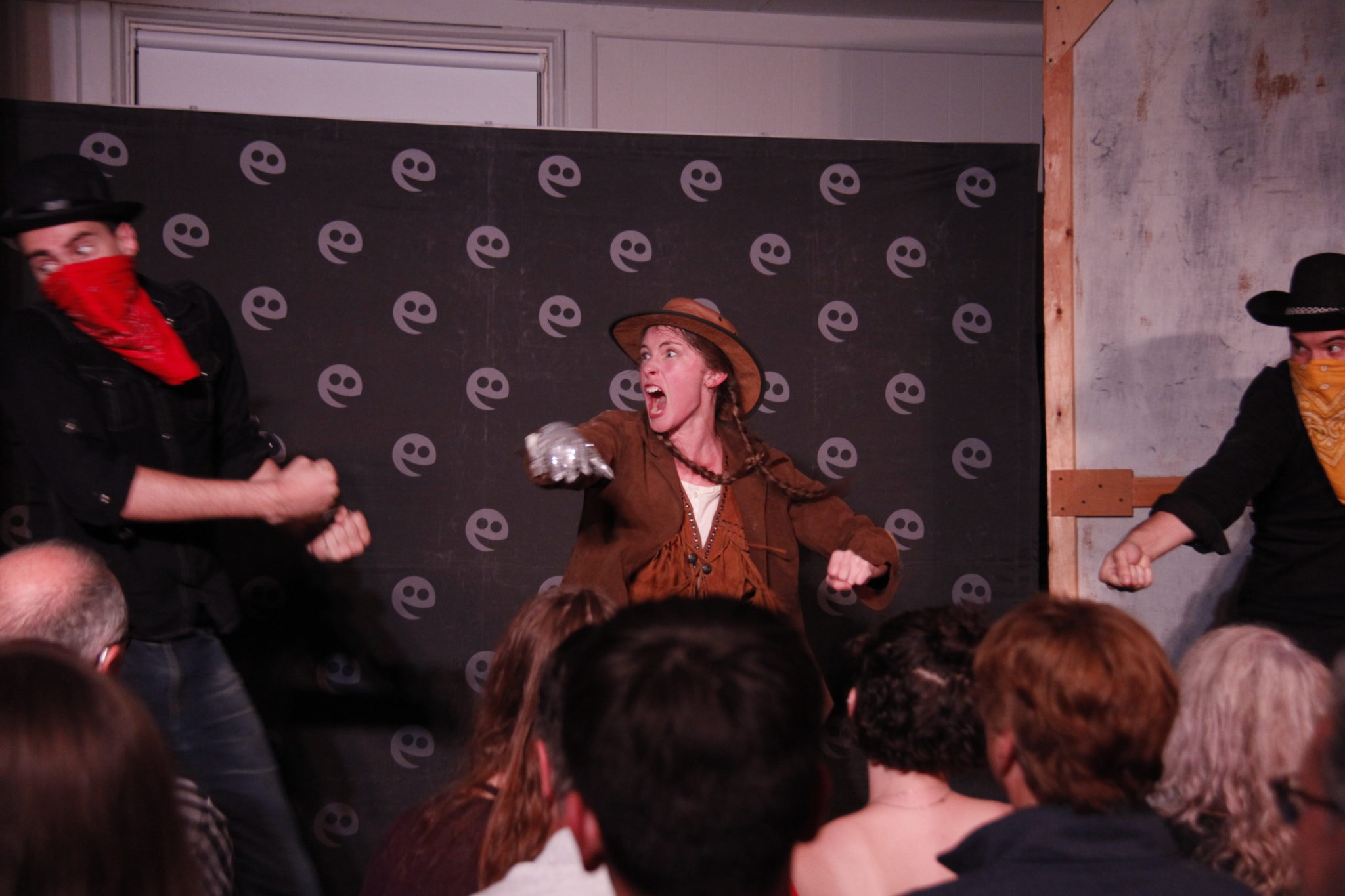 Taste That! hosts Prince Edward County’s summer comedy series Comedy Country which is in its fifth season and runs all summer long each month from Apr. – Sept. at different venues throughout the county.

Members of Taste That include Beth Easton, Gavin North, Julianne Snepsts, Paul Snepsts, Glen Wallis, Susan Wallis and Lenny Epstein who was not present on Saturday.

“I just got turned on to comedy,” expressed Paul Snepsts, producer for the event and member of Taste That. “I’ve always been a creative person myself, a visual artist as a youngster and into university. I than started a band called Juniper Daily and toured with them for awhile, but when that kinda fell apart I thought ‘Man I need something else now’ so on a lark I took an improv class in Toronto and it started this snowball of amazing opportunities. I met my wife doing improv, I’ve met the entire comedy community doing improv and I was a television actor for awhile. It’s just been a fun journey for me ever since I said yes to doing a silly comedy class.”

In improv theres a ‘golden rule’, the back bone of successful improvisation with the idea of when something is presenting it self to you, you accept it and than add to it. 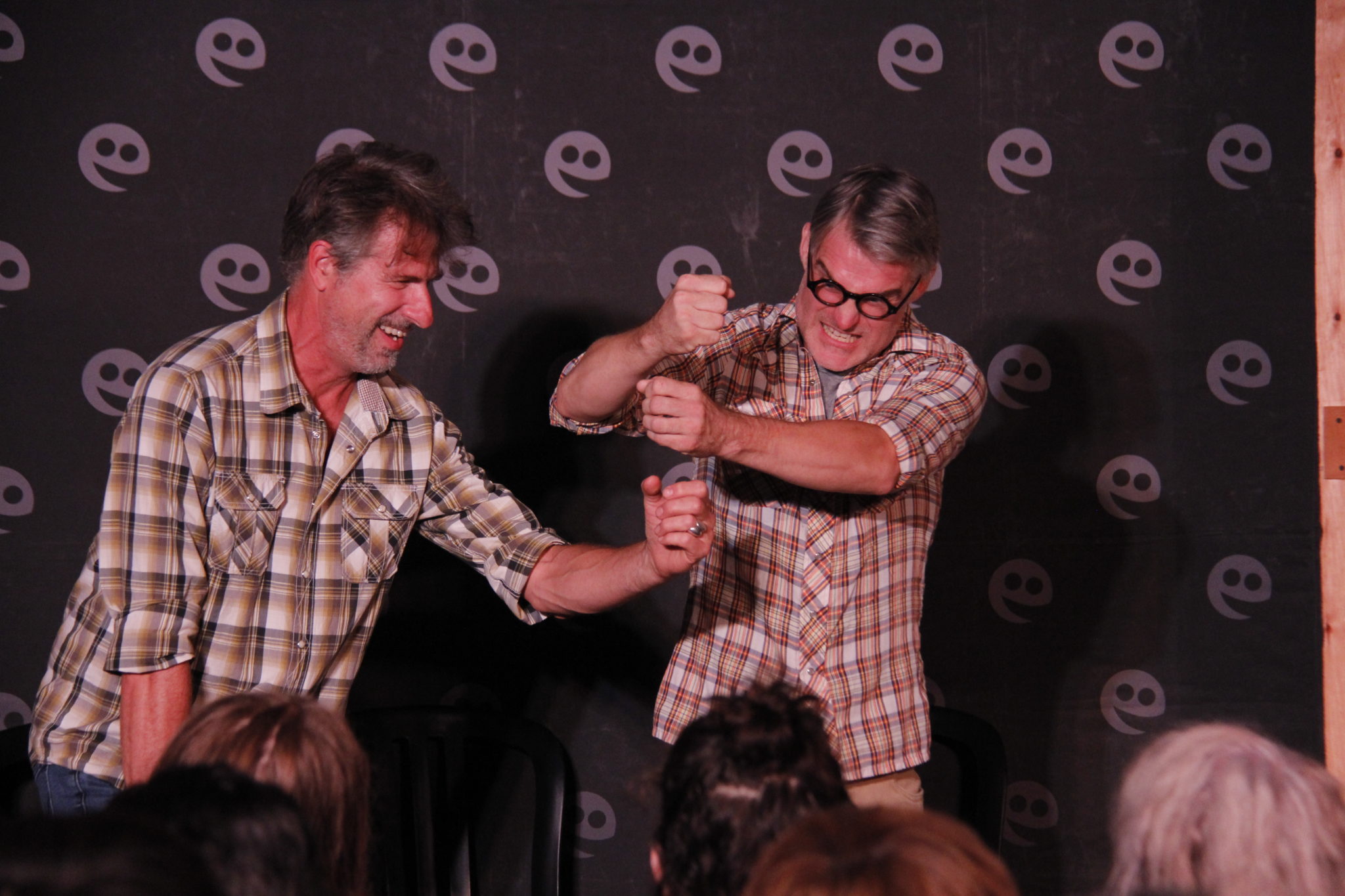 “It’s this slogan that improv nerds hang their hat on,” Snepsts stated. “I really dig it because it’s become a life mantra for me, where when your presented with something accept it and add to it, and ever since doing so in my first comedy class it’s been this wild ride of changes in evolution.”

As said on their website, the well established group Sex T-Rex is a Toronto based comedy troupe whose cinematic style, wild physicality and spot-on parody has delighted audiences across Canada and the USA.

“Sex T-Rex had an absolute blast performing to a sold-out audience at the Athol Town Hall,” expressed Victoria Laberge, publicist for Sex T-Rex. “We’re so grateful to Comedy Country for bringing us in, it’s a fantastic series and we were very proud to be part of it.”

The troupe launched in 2008 and branched out into scripted comedy in 2011.

Apart from Sex T-Rex’s performance at night the troupe also held an improv workshop during the day for any improv nerds, theatre punks, comedy posses and creative explorers.

“It was a bit of a whirlwind day as we arrived from Toronto that morning, hosted a workshop on Cinematic Action on Stage, rehearsed throughout the afternoon, then performed the show,” Laberge stated. “It was a real treat to be able to perform in the county in such a picturesque setting. We only wish we could’ve spent more time exploring the town.”

The Sex T-Rex troupe also had buttons with their logo available by donation to help pay for their ride back to Toronto. They made over $150.

“We met such lovely audience members from around the area,” Laberge said. “Folks were very generous; we made over $150 in button donations.”

The Comedy Country series will end with a bang at the finale with a queer forward sketch comedy ‘Extravaganza Eleganza’ at The Regent Theatre on Sept. 21.

Sneptst was asked by The Gazette why he loves the comedy scene.

“What’s not to love about the comedy scene? The way I feel about myself is I love for people to leave an interaction with me or any of the projects I undertake having had a laugh or leaving in a better state of mind then when we came together in the first place. That’s my goal with everything I do,” Snepsts said.