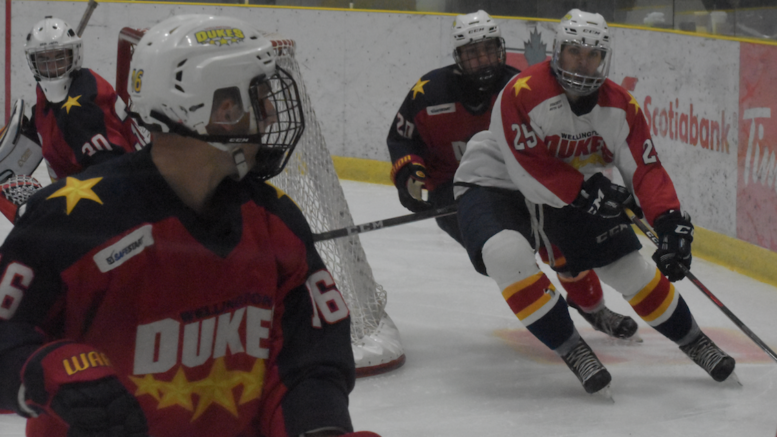 If anyone was wondering if Wellington Dukes fans were getting the itch for Junior A hockey to return to Lehigh Arena, they only needed to poke their head into the new Dukedome on Monday evening as the club hosted a Red-White intrasquad game featuring top prospects and returnees.

About 200 fans turned out Monday night to watch players that had managed to make it through the gauntlet of the two-day opener to training camp over the weekend and and the fan’s attendance even left new Wellington Bench boss Derek Smith impressed.

“I can’t believe the how many of our fans are here tonight,” Smith told the Gazette.

And why shouldn’t there be a sense of Joie de vivre in the community about the prospects of an organization with solid and committed  ownership that’s appeared in back-to-back Buckland Cup Finals? After two deep playoff runs, one of which netted an appearance in the National Jr. A Championship Game in 2018, the air of confidence around Lehigh Monday night was palpable. 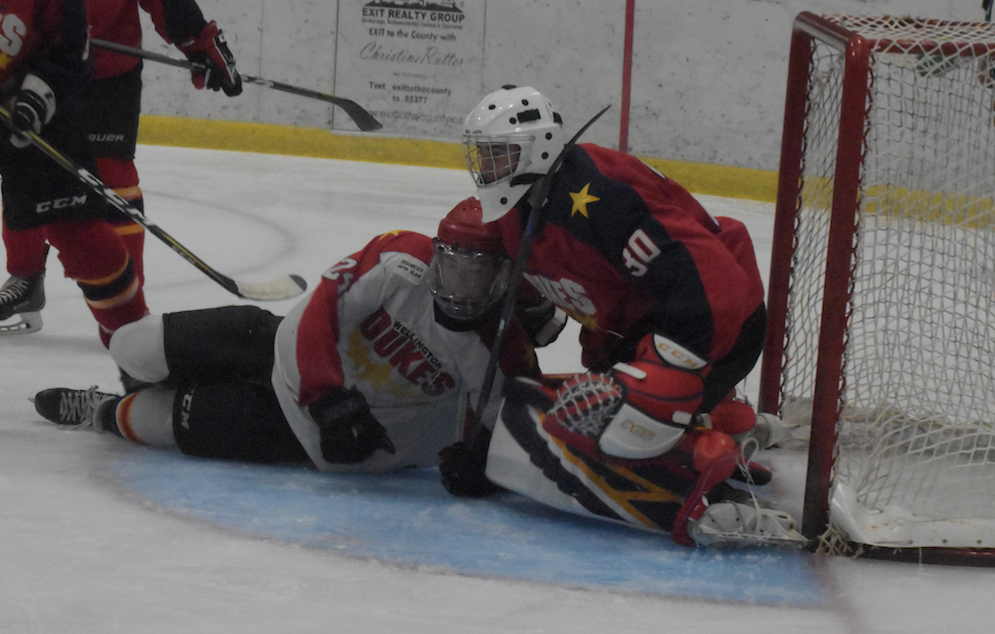 Smith was enthused by the weekend’s results and the commitment by some veterans to come to camp in shape and ready to compete.

One such player is Ben Evans and was there a more dear sight for Dukes fans than to see the Thorold, ON native back in Wellington colours after a season’s dalliance in the Greater Ontario Junior Hockey League in 2018-19?

Smith said Evans had taken it upon himself to start an offseason training regimen and was so anxious to get back to Wellington that he returned to Prince Edward County at the end of July in order to get focused on the upcoming season.

“He’s in the best shape we’ve ever seen him and he’s raring to go,” Smith said.

Another couple of players that look about as close to mid-season form as you are going to find three days into training camp were Ben Woodhouse and Daniel Panetta and both will be counted on to play key minutes for the Dukes this season.

On the back end, Brett Humberstone was sharp -less a glaring give away- while Quinn Hanna played with mixed results however the veteran blue liner is certain to be able to answer the bell when the games become real next month.

Meanwhile, 16-year-old blue liners  Roberto Mancini and Wil Murphy were giving Wellington brass a good eyeful as to why both were selected in the OHL draft last spring.

In net, Wellington has brought in Sault Ste. Marie native Garret Boyonoski in for a look.

In Blind River for the Beavers of the Northern Ontario Junior Hockey League last season, Boyonoski, 20, had a 3.22 Goals Against Average and a .910 Save Percentage.

Also in the mix for a spot in the Wellington net are Picton Pirates grad Kyle Renaud and Ridley College’s Matti Keeley.

In terms of the intrasqaud affair, Team Red used a three goal outburst in the span of 59 seconds in the second frame to top Team White 6-4.

Veteran Ben Addison had a pair of helpers for Team Red while fellow vet Dawson Ellis had two assists in a losing effort.

Renaud was the winning netminder.

Smith expected to be down to 25-30 players shortly although players drafted to OHL teams and exploring Major Junior camps could necessitate keeping a critical mass around longer than usual just to ensure the Dukes can ice a full lineup during their preseason campaign.

Wellington opens its 2019 exhibition schedule on Wednesday night when they host the visiting Pembroke Lumber Kings of the Central Canadian Hockey League.

The Dukes follow that contest up with a home contest against Trenton.